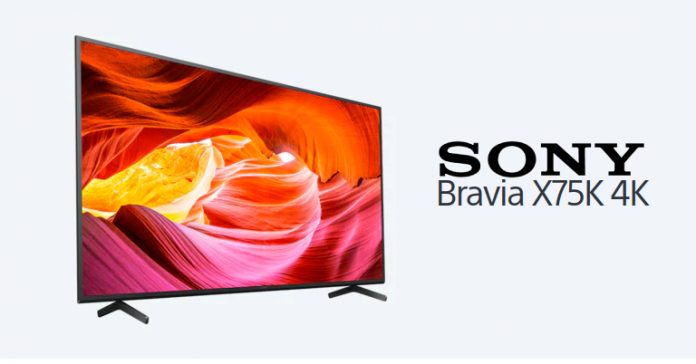 Sony has officially launched the Bravia X75K 4K LED TV series in Nepal. These are the latest 2022 model smart TVs, which include live color technology, Google TV support, and more. So, without further ado, here are the specifications, features, availability, and official price of the Sony Bravia X75K TV in Nepal.

The Bravia X75K TV is available in four screen sizes ranging from 43 to 65 inches. But Sony has only launched 55-inch and 65-inch models in Nepal as of now. These are 4K TVs with LED displays and minimal bezels all around. Here, the panel refreshes at 50Hz and includes a Motionflow feature for rendering high-speed footage without motion artifacts.

Additionally, it has Sony’s X-Reality Pro technology, which can virtually upscale 2K or FHD content to 4K resolution using a proprietary 4K database. The TV is also capable of playing HDR content and the Live Color technology in it ensures less noise and more details in the picture frame.

Powering the Sony Bravia X75K TVs is an X1 4K processor with 16GB of onboard storage.  It’s an Android TV, so you get access to tons of apps via PlayStore. It’s also natural to expect Voice Assistant, Chromecast, and other native Google features. The TV even comes with Apple AirPlay and Apple HomeKit support so iPhone and iPad owners can stream content on this TV. The port connectivity options include three HDMI (with HDCP 2.3 and eARC), two USB, one ethernet, one Digital Audio Output, and one RF in port. It makes use of dual-band Wi-Fi and Bluetooth v5.0 for wireless connectivity.

The Sony Bravia X75K TV costs NPR 161,500 in Nepal for the 55″ model and NPR 211,000 for the 65″ model. The company is providing a straight 10% discount on both TV models for this Fifa World Cup.  You can purchase the Bravia X75K TVs from Hukut and Sony-authorized retail stores in Nepal.