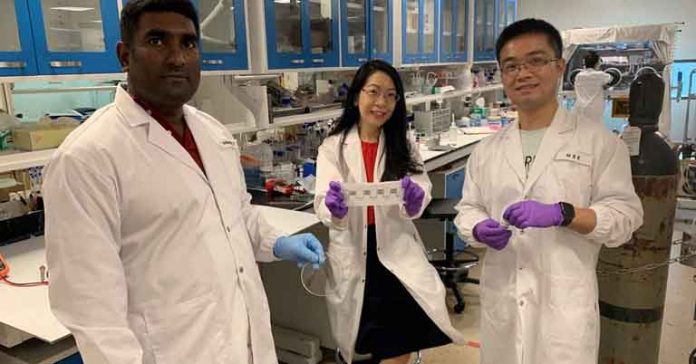 Smart wearables are rising in popularity. To make them truly smart, scientists are working on alternative energy sources to power them. Scientists have now built a sweat-powered battery capable of producing enough energy to power commercial temperature monitors.

Scientists are now turning to the human body to power the future wearables. Earlier, researchers from the University of California were successful in producing 400 millijoules of energy in ten hours from human sweat.

Now, another team from Nanyan Technological University has successfully developed a device capable of 3.9 mW output.

Sweat is the new power source

The team led by Professor Lee Pooi See generated 20 hours’ worth of electricity with just 2ml of sweat. As per See, it’s sustainable as it does not contain heavy metals or toxic chemicals, thus reducing harmful electronic waste. The battery can be used in future wearable devices and health sensors.

Irene Goldthorpe, an engineer at the University of Waterloo says, “It is well known that electronics do not like moisture, and thus, wearable devices are typically fully encapsulated to shield them from sweat.”

He added, “This work turns sweat from a hindrance into an asset, showing that it can improve the conductivity of printed interconnects and even using sweat as an electrolyte in a wearable, bendable battery. This may open a new paradigm in the design of wearable electronics.”

Moving on, the device consists of a sweat-absorbent textile wrapped around a 0.8-inch battery. The device lays flat as any normal bandage. Since there is no metal or toxic component, it does not cause any issues when worn.

The fabric absorbs the sweat, which the battery converts into energy. The sweat-retaining property of the fabrics means it can maintain a continuous supply of sweat to the battery.

This battery uses silver flakes-containing printing ink and a hydrophilic polymer. The ink functions as electrodes onto the stretchable fabric. Furthermore, when sweat comes into contact with the battery, it increases the conductivity of the silver flakes and causes the electric current to flow. 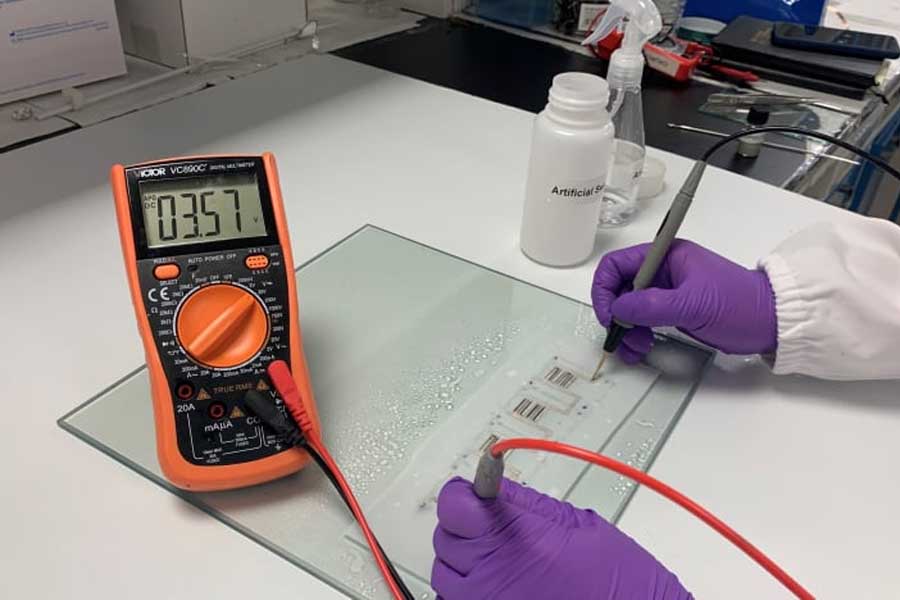 On spraying the device with artificial human sweat, researchers recorded a voltage of 3.57 V. Moreover, testing it on a real person showed that it can generate a voltage of 4.2 V and an output power of 3.9 mW.

For context, the output is enough to power a commercial temperature sensor capable of sending continuous data to a smartphone via Bluetooth.

Aside from this, the slimness of the battery address some major problems in modern-days wearables. First and foremost, it is sleeker, and hence, more appealing to customers than standard button batteries.

Secondly, unlike today’s thinner batteries, it stores and generates enough charge on its own to last the whole day.

A patent application for the sweat-powered battery has also been filed through the university’s enterprise and innovation company, NTUitive. The researchers are now planning to explore the effects of other components of human sweat and how factors such as body heat may affect the performance of the battery.