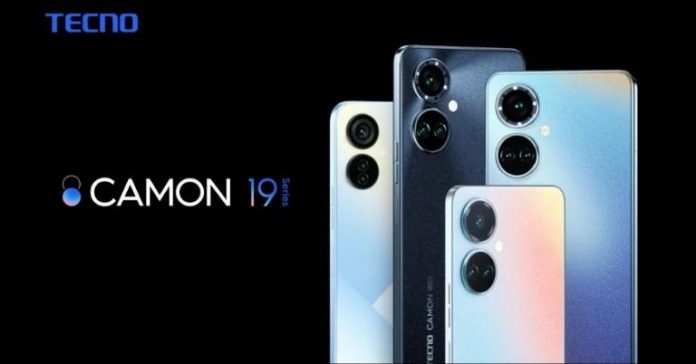 Tecno recently held a global launch event for the Camon 19 series of smartphones at the Rockefeller Centre in NYC. This article will go through the specs, features, availability, and expected price of the Tecno Camon 19 series in Nepal.

This lineup introduces four phones: the Camon 19 Pro 5G, 19 Pro, 19 Neo, and the standard Camon 19. As the name suggests, the Camon 19 Pro and Pro 5G are the relatively more expensive entries in this series compared to the Camon 19 and 19 Neo.

Let’s start with the star of the show, the Tecno Camon 19 Pro 5G. It features Samsung’s 64MP ISOCELL GWB sensor, which the two companies worked on together. Its main highlight is the RGBW filter, which improves light sensitivity and low light performance.

According to Tecno, they have increased the light intake by over 208% by using the G + P technology that uses a crystal glass lens instead of a plastic one. This 64MP sensor is complemented with OIS as well.

While both phones share the same primary camera, the Camon 19 Pro has a 50MP portrait camera with 2x optical zoom and a 2MP bokeh camera. On the other hand, the 5G variant goes with a rather disappointing twin 2MP sensors: one for bokeh and one for macro shots. Likewise, the Camon 19 Pro 5G features a 16MP selfie camera compared to a 32MP shooter on its non-5G sibling.

The rear panel of the Camon 19 Pro duo has a glittery finish, and it is available in two colors: Sea Salt White and Eco Black. The flat frame has a power button and volume rockers on the right. These two phones share the same 6.8-inch FHD display with 2460 x 1080 pixels resolution and a 120Hz refresh rate. Unfortunately, it is an LCD panel. But the highlight of this display is its thin 0.98 mm side bezels. Thus, Tecno claims these phones have the “industry’s slimmest bezel”.

Moving on to performance, the 5G variant is powered by MediaTek Dimensity 810 chipset. Likewise, the 4G Camon 19 Pro packs the Helio G96 processor instead. Both of them can be configured with 8GB of LPDDR4x RAM and up to 256GB of UFS 2.2 storage.

Likewise, they’re fueled by a large 5,000mAh battery with support for 33W fast charging. On the software front, these Tecno phones run on XOS based on Android 12.

On the other hand, the Tecno Camon 19 and 19 Neo share quite a lot in common, including MediaTek’s Helio G85 processor. Similarly, they feature a 6.8-inch FHD+ LCD display with a regular 60Hz refresh rate. The battery capacity here is 5,000mAh, which supports 18W charging.

But they do differ in the camera department though. The Camon 19 has a triple camera array with a 64MP main RGBW sensor alongside two 2MP depth and AI sensors. On the contrary, the 19 Neo goes with a 48MP primary shooter and a 2MP depth sensor. As for selfies, it has a 32MP front camera compared to a 16MP sensor on the Camon 19.