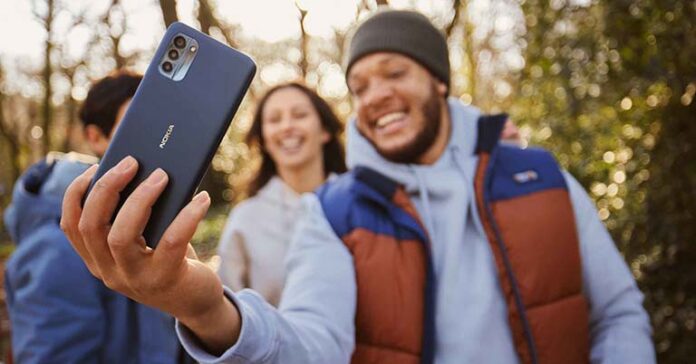 Nokia announced its first smartphone of 2022, the new Nokia G21, back in February. This is a budget device and the successor to last year’s G20. And now, the phone has made its way to Nepal as well. In this article, we will be discussing the specs, key features, official price, and availability of the Nokia G21 in Nepal.

Nokia G21 sports a 6.5” IPS LCD panel with an HD resolution of 1600 x 720 pixels. Unlike its predecessor, it now supports a 90Hz refresh rate. It’s an adaptive refresh rate, and the screen can dial back to 60Hz when needed. Likewise, Nokia has even added support for HD playback for Netflix on the G21.

Over on the back, Nokia is finally moving away from the circular camera bump that its smartphones have been known for. There is now a rectangular camera bump with round corners which houses the triple camera setup. Under the hood, Nokia G21 packs the Unisoc T606 chipset. This particular processor is based on TSMC’s 12nm process and features two Cortex-A75 and six Cortex-A55. As a result, it should perform a lot better than G20’s Helio G35 with eight Cortex-A53 cores. Handling the graphics this time around is the Mali G57 GPU.

Nokia has paired the chipset with 4GB of RAM. Likewise, users can choose between 64GB and 128GB of internal storage. There is also an option to expand the storage using an external microSD card.

Nokia has cut down the number of cameras on the G21. While the G20 had a quad-camera setup, its successor only has three. The primary camera now uses a 50MP sensor, up from 48MP. Accompanying it is a 2MP macro and a 2MP depth sensor. Unfortunately, it does not have any ultrawide sensor.

Nokia is emphasizing more on the camera software features. The G21 brings a new Super Resolution mode which the company claims will capture better detail. There is also an improved Night Mode. The software has always been a strong selling point for Nokia. Here, the Nokia G21 boots on Android 11 out of the box. That being said, the company has promised two major Android updates. Further, the phone is also eligible for three years of security patches. Buyers will also get 30 days of free trial of Express VPN.

Moreover, the software-based Face Unlock feature has now been tweaked to recognize users even with a mask on.

There is no real improvement in the battery specs. Nokia G21 still comes with a 5,050mAh battery. But the company claims to have improved the battery saving mode which now has two stages with the first one starting at 20% battery.

The charging speed has been increased to 18W. However, the phone will ship with a 10W adapter in the box. Other features include a side-mounted fingerprint scanner, 4G LTE connectivity, and a 3.5mm headphone jack.