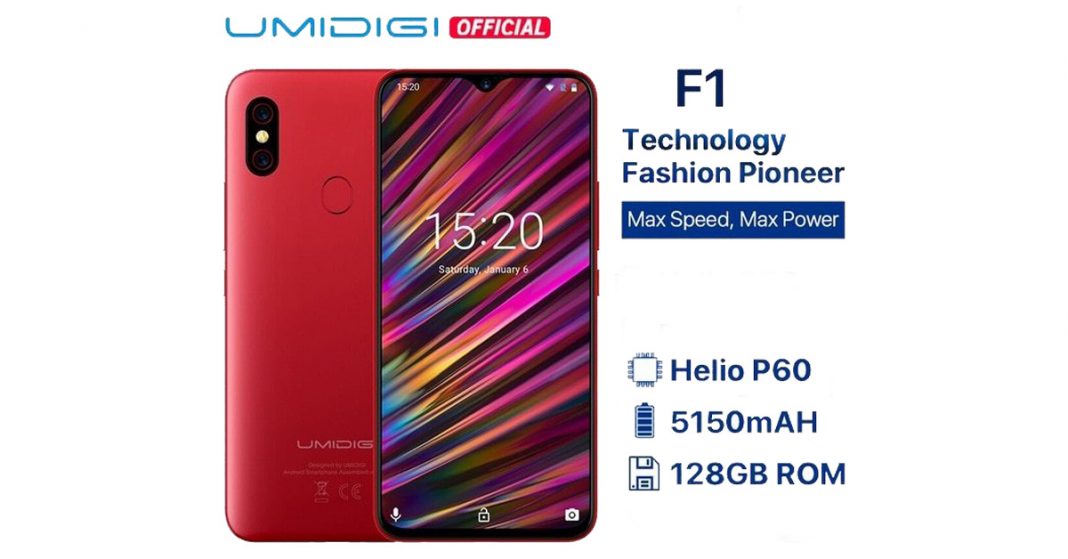 Chinese brands seem to be doing pretty well in the market these days. The Chinese companies are coming out with phone one after another. And UMIDIGI is one of the brands that came into the limelight with some of their products like the UMIDIGI Z2. And here’s another one from them – the UMIDIGI F1!

In terms of looks, the UMIDIGI F1 looks like any other phone from the late 2018s. It features a variation of edge-to-edge display, with very thin bezels and a water-drop / tear-drop notch. At the back, there is a dual camera setup, and a traditional fingerprint sensor.

To be honest, it looks like the OPPO F9 or Vivo V11. Apart from the fact that it’s back is not as shiny or glossy as those phones.

The UMIDIGI F1 features a large 6.3″ Full HD+ LTPS LCD display. The display has a 19.5:9 aspect ratio and a 92.7% screen-to-body ratio. For a budget phone, the display looks like a winner to me.

In terms of camera, the phone’s dual camera setup comprises of a 16 MP primary sensor with f/1.7 aperture and an 8 MP secondary one, which could very well be a depth sensor. The selfie camera on the phone measures a 16 MP with f/2.0 aperture. By the looks of it, the cameras won’t disappoint.

Under the body, a MediaTek Helio P60 powers the device, which is a powerful enough chip for midrangers. The 2.0 GHz processor combined with 4 GB RAM should give you ample amount of performance. Also, it packs a Mali-G72 GPU for good graphics performance.

It also has a 128 GB on-board storage and is expandable via microSD. In addition, this is the first UMIDIGI device to run Android 9.0 Pie out of the box. Furthermore, you get a massive 5150 mAh battery with 18W fast charging, USB-C, NFC, and such. For a budget smartphone, the specs and features are crazy!

The phone is set to launch next year for a crazy price tag of $199. It will go on open sale from 7th Jan 2019. But availability in all regions internationally is not quite known. Also, in Nepal, where UMIDIGI is still struggling, this phone, at the right price could be its salvation. But, we’ll see.