Home Guides Tech Guides What’s the blue light from the display doing to you? 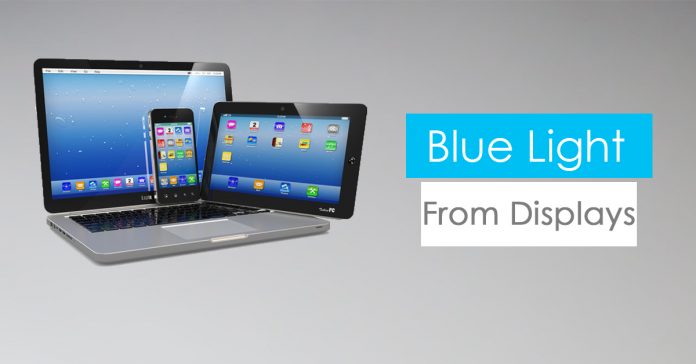 First things first, let us discuss blue light. We all know that light is made up of electromagnetic particles that travel in waves. These waves emit energy and range in length and strength. The interrelation between wavelength and energy can be described as – shorter the wavelength; higher the energy. Light can be grouped according to wavelength into an electromagnetic spectrum that consists of gamma rays, x-rays, ultraviolet (UV) rays, visible light, infrared light, and radio waves.

However, the human eye is sensitive to only one part of this spectrum: visible light, which is seen as colours: violet, indigo, blue, green, yellow, orange and red.  Blue light has a very short wavelength, and thus it produces a higher amount of energy.

The sources of blue light include- the Sun, and it’s artificial sources include electronic devices such as cell phones and laptop computers, as well as energy-efficient fluorescent bulbs and LED lights.

In this present tech-savvy world, it would be irrelevant to say that our exposure to blue light has not been increasing. Most of us spend the majority of our waking hours staring at the digital screen, whether it’s the computer at work, our personal cell phone, playing a video game, or just relaxing and watching TV. However, it is essential to understand what this exposure is doing to us.

Blue light has both pros and cons. In its natural form, your body uses blue light from the sun to regulate your natural sleep and wake cycles.  This is known as your circadian rhythm. It also helps boost alertness, heighten reaction times, elevate moods, and increase the feeling of well-being. However, prolonged exposure to artificial blue light or blue light after sundown may cause retinal damage and contribute to age-related macular degeneration, which can lead to loss of vision; several types of cancer (breast, prostate), diabetes, heart disease, and obesity. Similarly, brain imaging researchers have found brain changes to be very similar in those addicted to their smartphones and other digital devices as those who are addicted to alcohol, cocaine, heroin, marijuana, meth and other drugs. Many studies have also shown that screen use increases depression, anxiety, and aggression, and can even lead to psychotic-like behaviour and a loss of touch with reality.

Effects of exposure to blue light after sundown

Ways to be safe from Blue light

It is better to be safe than sorry! Rather than risking oneself to all those health hazards, it is highly smart that we implement these ideas to keep ourselves safe and healthy.