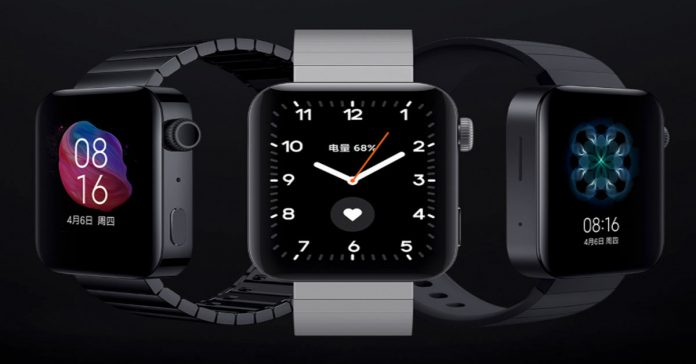 If you thought that Xiaomi was going to just sit back for this week after launching the Mi CC9 Pro, then you were wrong. They still had something up their sleeve. Yup! Xiaomi also unveiled the new Mi Watch alongside the Mi CC9 Pro. In fact, this is the first-ever smartwatch that has MI branding.

With the launch of the Mi Watch, Xiaomi too has entered the foray of smartwatches. And it is not there just for the sake of it. This device actually has some serious features packed into it. So much so that Xiaomi has labeled it as “small phone on your wrist”.

Basically, Xiaomi Mi Watch has a 1.78-inch AMOLED display. And it has the always-on capability. It comes in a 44mm casing and the rear is made up of ceramic. For easy control, there’s a button and a crown on the right-hand side. And on the left, there’s the speaker and a microphone. The watch supports the usual smartwatch features such as Bluetooth, NFC, and eSIM support. These features allow the Mi Watch to operate autonomously.

In addition to the fitness apps in the smartwatch, the Mi Watch also includes swim tracking. Furthermore, it is compatible with Firstbeat’s performance analytics. This means that depending upon you’re exercise routine, the smartwatch is capable of giving you a detailed break down of your heart rate. As for its UI, the watch uses the Xiaomi’s native MIUI specifically developed for watches. It functions on top of Google’s Wear OS. With over 40 built-in apps and an exclusive app store in which third-party developers can contribute, the potential for this watch seems unlimited. Theoretically, that is!

Moving on, the watch runs on Snapdragon Wear 3100 4G chipset. It has 1GB of RAM and 8GB storage. Talking about the battery, its 570 mAh battery can last for up to 36 hours. That too with 4G turned on! Furthermore, the 570 mAh battery is the biggest ever battery in a smartwatch.

Talking about its availability in Nepal, or the lack of it, there’s no official statement yet. In fact, there has been no word about Xiaomi Mi Watch’s international availability.