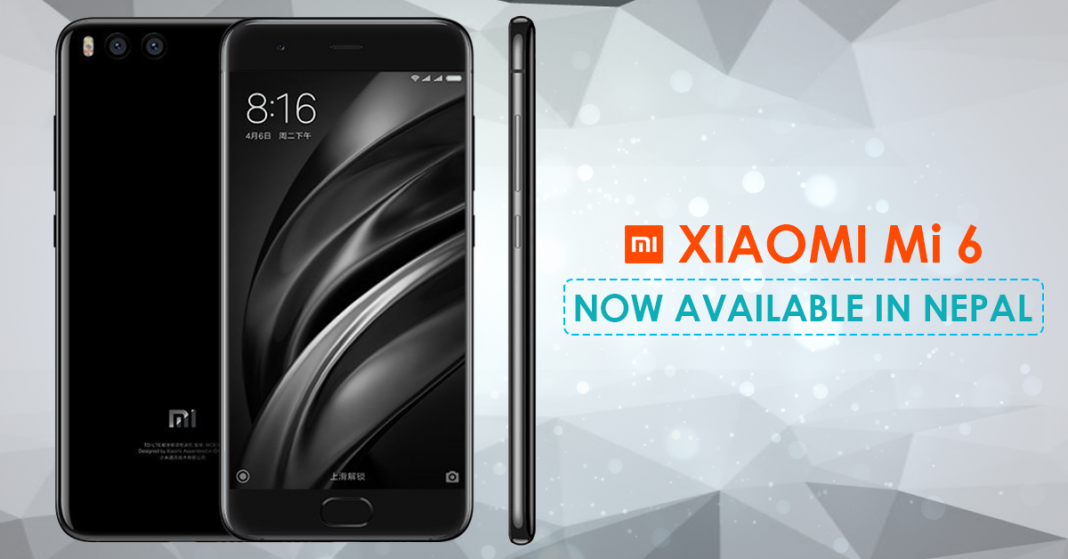 Vatsal Impex Pvt. Ltd., the authorized distributor of Xiaomi products in Nepal, has launched its flagship smartphone of 2017 — the Xiaomi Mi6 in Nepal. Announced 3 months ago in China, the Mi6 offers flagship grade specs at a lower price compared to existing flagships from Samsung or Sony.

In the camera department, the Xiaomi Mi6 has the all-new Dual 12MP camera setup. The first one is a 12MP Sony IMX386 sensor with 27mm f/1.8 lens and 1.25µm pixels. It is assisted by a 4-axis OIS, phase detection auto focus, and dual-LED flash. The second camera is a 12MP telephoto lens with 56mm f/2.6 lens and 1.00µm pixels. The second lens lacks OIS. The front houses an 8MP selfie camera.

The Xiaomi Mi6 has a 3,350mAh battery with quick charge 3.0 support (55% charge in 30 minutes). Connectivity option includes Dual Nano SIM slots with 4G LTE (Cat.16 with 1Gbps of download speed), Dual-band Wi-Fi a/b/g/n/ac, GPS/GLONASS/Beidou, Bluetooth v5.0, NFC, USB Type-C port, and IR blaster. The Xiaomi Mi 6 lacks FM radio and 3.5mm earphone jack, but Xiaomi is providing a Type-C-to-analog jack adapter inside the box. It is currently running on MIUI 8 base on Android 7.1 Nougat.
There are stereo speakers on the bottom and a fingerprint scanner on the front.

You can buy the Xiaomi Mi 6 in Nepal for Rs. 54,999 starting today from its official website or from authorized retail stores all over Nepal. So, what do you think about the Xiaomi Mi6 (Considering the specs and price)? Let us know in the poll down below.