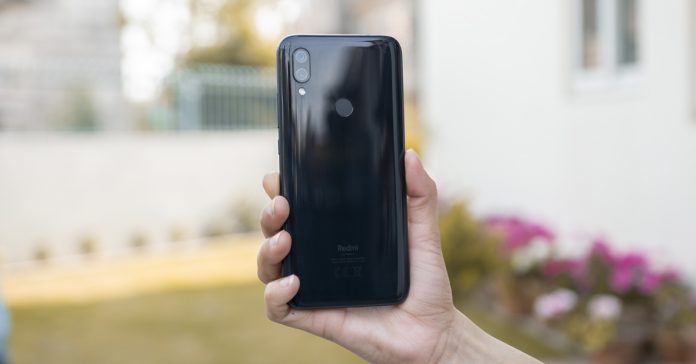 Xiaomi launches three budget phones for its Redmi series every year. This year too, it came up with the Redmi 7 series with a normal variant, a Note variant, and a Pro variant. And like the previous years, the Note 7 And the Note 7 Pro have taken all the spotlight.

The Redmi 7 here is the cheapest among the bunch and offers good improvements over the last years Redmi 6, at least on paper. So, let’s find out if the Redmi 7 provides enough value for the price like its siblings.

The Redmi 7, as expected, comes in a glossy plastic body and a plastic frame. On hands though, the feel is not very cheap. It feels sturdy enough, unlike last years Redmi 6 which had creaks and poor build quality.

This shiny plastic back, however, can easily get scratches and on a long run you will lose colors and it will wear out, So, the first thing you should do if you are getting this phone is buy a decent back cover. Even with the large bezel on the bottom, Xiaomi has made some use of the space adding in an LED notification indicator. Good job, Xiaomi!

The display we are looking at here is an HD display which is definitely not sharp if you compare it against full HD displays, but it’s still good enough for the price. The display is colorful and fairly color accurate. It is bright and gets the job done while you are using it outside. This display also offers a variety of settings to change the colors and contrast, so you can change as per your liking.

The best thing about this display is it is protected by a Gorilla Glass 5. I think this is the first time I have seen a gorilla glass 5 on a budget phone. However, with the dust swirling around the environment, I suggest you apply a tempered glass to add an extra level of protection.

Another talking point of the Xiaomi Redmi 7 is the internals. This device has the Qualcomm Snapdragon 632 inside, which is quite a performer. There are two variants of the phone, and the one I reviewed is the 3 + 32 GB RAM, and if you’re buying this device, buy this variant and not the 2 + 16 GB version. Since you are getting quite a decent processor, the 2GB RAM and 16GB storage variant won’t be enough if you intend to install and play a lot of high-end games.

With the Snapdragon 632, even high demanding games like PUBG and Asphalt 9 runs smoothly on medium settings. For the price, everything works like the way it’s supposed to, and even while running a few applications on the background, I haven’t really faced stutters. But there are times when the applications take a while to open up. It’s not always but several times, the time I tap the app icon and the time it takes to load up is around a second or two. The Xiaomi Redmi 7 runs on Android v9 Pie out of the box with Xiaomi’s own skin on top. The MIUI 10 software helps with the software experience, there are a lot of customizations in stores, and everything feels snappy. I still don’t like the lack of app menu, and also the fact that there are several pre-installed applications that you cannot delete. And obviously, with Xiaomi, you get ads here and there in the user interface. Also, the window that always pops up when you install an application is an absolute nuisance. Now, the Redmi 7 is a budget-oriented device. So, testing out the cameras on the phone, I had kept my expectations low. Specs wise, there’s a 13MP primary sensor with an extra 2 MP depth sensor for portraits, and that’s what I checked first.

The portrait shot on the phone, well, check out the skin color. That picture looks like someone just applied an Instagram effect on it. Yes, the overall picture might look good, but that skin color is not at all natural. And it’s really inconsistent with the edge detection too. In terms of the color tone from normal images, the Redmi 7 captures pictures with a colder tone in a daylight environment. The color tone depends completely on a user’s preference though. So, no judgment here. Talking about the details, the photos look good normally, but if you zoom into it, you will notice the lack of sharpness and details on the images. What’s nice on the Redmi 7’s rear camera photos is the saturation. While smartphones from various manufacturers, for example, Samsung, opt for oversaturated colors, the Redmi 7 remains true and that’s one of the plus points of its cameras. But in terms of dynamic range, the shadow detail is quite poor, and you won’t really notice it. Even though the highlight details are well saturated, and the exposure control is decent, you won’t be able to see the objects where the shadow lies.

Talking about the night time shots, well, the Redmi 7 is average at its best. What you will notice right away on its images are the grains and noise. If there is a light source, the photos have quite a bit of detail which is decent for the price. Check out these buildings, although there is a lack of details on the photos, the overall image quality is good, and even appealing.

On to the video quality, what I am really impressed with is that this budget device is capable of shooting full HD videos at 60 fps. And it is smooth too, although you will notice slight wobbles. Also, the colors are washed out, especially a person’s skin. Finally, let’s talk about the selfie. There is an 8-megapixel front-facing camera residing in the notch and it does an okay job and is better than what you get from the back cameras. Just look at the image, it’s decent for the price, right? But again, the skin tone is not very natural.

The portrait from the front camera is purely software, but it does an okay job. You also get AI beauty options and it’s quite good and not as aggressive as what you get from Vivo and OPPO.

One of the subtle design changes is the dual speaker grills on the bottom of the phone. Being a budget device, obviously, it has only one speaker on one of the grills that actually gets pretty loud but the quality is nothing to write home about.

The thing that hasn’t changed is the placement of the fingerprint scanner on the back. The scanner is quite fast which is really impressive for a budget phone. There’s also face unlock feature which is again fast, but since it’s done by the front camera, it’s not as reliable as the fingerprint sensor.


A good inclusion on the phone is the IR blaster which is helpful in controlling various electronic devices. But the thing Xiaomi has failed to add is the gyro sensor and that is quite strange as the previous Redmi phones had it. It comes in handy while tracking rotations and for VR.

The battery is also the strongest part of the Redmi 7. The Redmi series, apart from a couple of devices, has been a trademark when it comes to larger batteries, and this time it’s no different. There is a large 4,000 mAh battery inside, which does a commendable job. In my use, which constituted of watching an episode of Game of Thrones, playing games for a couple of hours, browsing through social media and different websites, the phone gave a screen on time of 6 hours. This is amazing, and for a “normal” user, you should be able to use it for a day and a half.

With an 18W fast charger, it fully charged the phone in 2 hours. So, you would want to buy a fast charger. The Redmi 7 is probably on the shadow of the Note 7 and the Note 7 Pro. It’s not as popular as its siblings, but on my test, with the efficient yet powerful professor and the HD display, the phone performed quite well. But it has its own shortcomings. The device’s camera setup shows promise but it’s not up there and some might not like the design. But you should take a look at the pricing. The device has a great battery life, a decent display, and ticks the boxes of the primary necessities of a smartphone. And for the price and the features it packs, it’s a device you should take a look at right away!