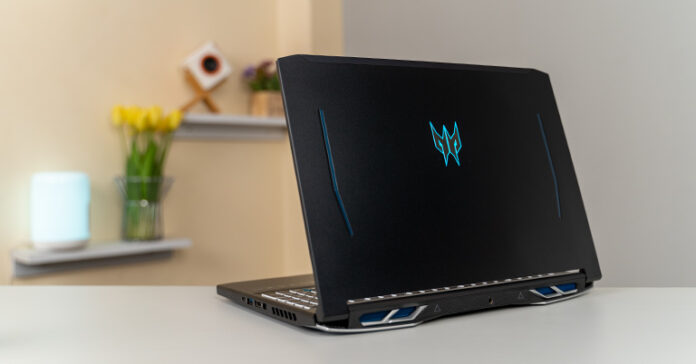 Over the years, Acer has pretty much perfected its Predator Helios lineup of gaming laptops. Thanks to their bold design mixed with powerful hardware and an equally competent thermal solution, Helios 300 has been the go-to choice of many gamers. So when I had the 2021 edition of Acer Predator Helios 300 (PH315-54) in for review, my expectations were high. And for the most part, this laptop has managed to live up to its reputation just fine.

Because this is a tried-and-tested design, Acer has been careful enough to not tamper with what works. As a result, the Helios 300 still features a familiar bold design with the glowing “Predator” logo at the back.

Unfortunately, there’s no way to completely shut it off—and it’ll instead get dimmer/brighter depending on the screen’s brightness level. This is complemented by non-illuminating blue stripes on the sides to let everyone around you know what you’re dealing with. The sharp-angled edges further establish the bold dominance of the Predator heritage. 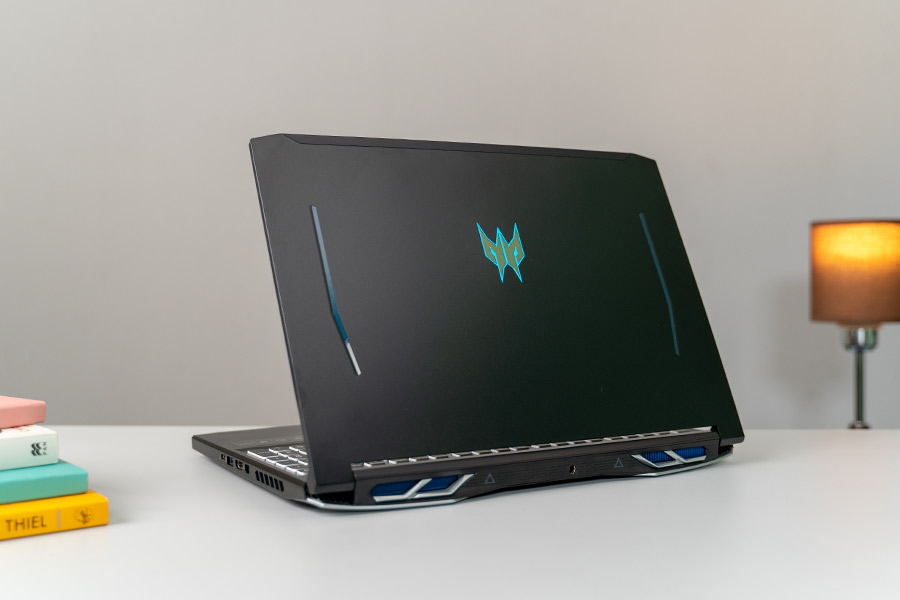 But things have changed in 2022. Few laptop makers had already adopted a relatively modern look on their 2021 lineup of gaming laptops and that commitment has only grown stronger this year. So, coming from someone who’s absolutely adored the subtle design of Lenovo’s Legion 5 Pro or the HP Omen 15, suffice it to say that I’m not a big fan of how the Helios 300 looks.

Plus, its wrist rest area is quite sharp as well. This hasn’t been bothersome at all when I’m wearing full-sleeved clothes in this weather, but I’m not sure about how it’ll fare during the summertime. Anyway, the metal body of the laptop—which includes the lid and the keyboard chassis—feels quite premium. At 2.3 kg, this is certainly not the most lightweight gaming laptop I’ve had in my backpack, but I’m not complaining.

Besides, you get one HDMI 2.1 connection that can output up to 4K/120Hz content (or even 8K/60Hz), one USB 3.2 Gen 2 Type-A, and one Mini DisplayPort 1.4. This USB-A port even supports power-off charging by the way—which means you can juice up your phone, tablet, smartwatch, or other USB-powered devices even when the laptop is in Sleep mode.

The Predator Helios 300 further continues to impress me with its display. It would’ve won me over completely if it was married to a 16:10 aspect ratio, but looks like we’re gonna have to wait till next year for that because even the new 2022 edition of this laptop incorporates the aging 16:9 screen.

At least the Predator branding on the bottom bezel is a lot subtle this time around, huh?

Specs-wise, you’re looking at a 15.6” display with a QHD resolution, 165Hz refresh rate, 3ms response time, and 100% DCI-P3 color coverage. And without a shred of doubt, this is the best screen on a gaming laptop in this price bracket.

Compared to the display on other gaming laptops in this arena, the Predator hunts down its prey rather easily. Fair to say, this can be a decent monitor for your professional video creation workloads as well. Our calibration tool measures this screen’s color gamut as follows:

However, not everything’s sunshine and rainbows here. Complementing all these specs is its hilariously mediocre brightness level. 238.4 nits is more than enough for indoor usage—sure—but that’s simply not enough if you ever plan on taking this thing out in the sun.

Could be a QC issue

But if you don’t intend on using this laptop outdoors, it won’t matter as much. I’m not sure this is a quality control (QC) issue limited to a few units including ours because Acer clearly states 300 nits of peak brightness on this thing. Moving on, the viewing angles here isn’t that bad though—with minimal drop in brightness, saturation levels when looking at it from the sides. Unlike a few other gaming laptops I’ve tested recently, the Helios 300 isn’t subject or any major IPS glow/screen bleeding either.

On to the keyboard, the Predator Helios 300 has the same 4-zone RGB backlit keyboard as last year. These concave keys do take some getting used to if you’ve mostly used flat keys on a laptop, but that’s ok. Compared to other gaming laptops I’ve tested last year, Acer brings comparatively softer keys—and I kinda like them. More importantly, their silent sound profile is music to my ears. Heh. But what gamers—especially eSports gamers—will appreciate more is the 26-key rollover that prevents any possible ghosting issue during the gaming sessions. There’s also a dedicated Numpad section over on the right, which is slightly compact in size compared to the other full-sized keys.

It hosts the shortcut key to the “PredatorSense” app as well, where you can overclock the CPU/GPU, toggle between multiple performance/fan profiles, tune up the keyboard lighting, and more.

The dedicated Turbo key is a blessing

As you can see, the full-sized arrow (thank heavens) and the WASD keys share a see-through design to further establish the gaming aesthetics on the Helios 300. And I gotta talk about this “Turbo” key.

You can of course switch to the maximum performance mode through the aforementioned PredatorSense app, but come on—how cool is it to just hit one button and start your game without having to worry about fan speeds and such.

Regardless, this trackpad is just about okay. Or as the deputy chief engineer of the Chernobyl Nuclear Power Plant would say “Not great, not terrible”. As expected, it’s plastic-made and features integrated left/right keys. 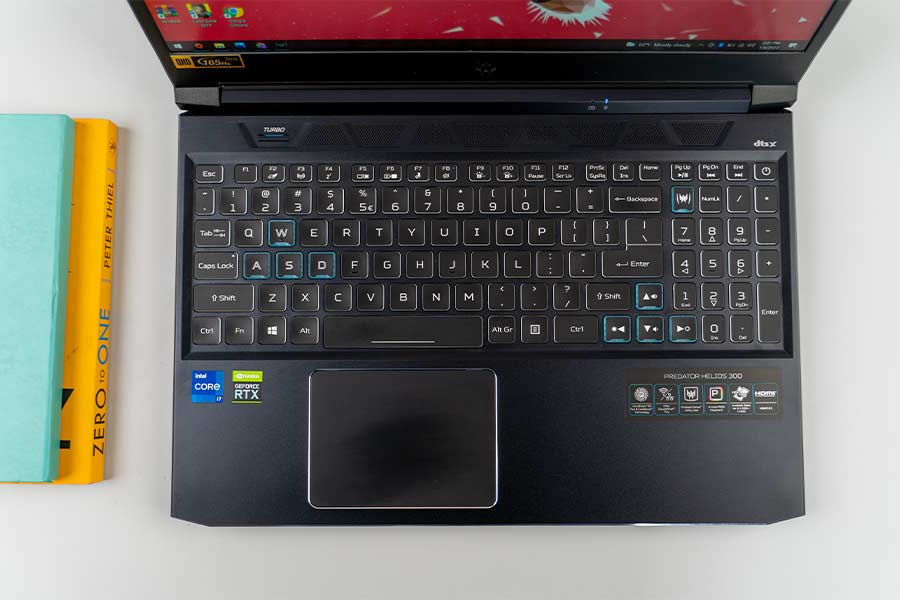 The click response is fine and multi-finger gestures work without any trouble either. And although a glass trackpad certainly would’ve been better, I didn’t notice any touch resistance here.

Over on the audio, the Helios 300 has a typical set of down-firing stereo speakers. While it’s definitely not the worst I’ve heard on a gaming laptop, don’t expect much from this setup. It gets fairly loud enough for an average-sized room and there’s even the option of playing with different audio profiles.

Oh, I almost forgot—in case people around you don’t recognize that this is a gaming laptop, Acer has made sure to remind them of the fact with the distinct start-up sound. Thankfully, you can disable it pretty easily under the PredatorSense app. For all your video calling needs, you’ll find a standard 720p HD camera housed inside the top bezel alongside the array microphones. I guess it’s alright for casual video calls and such.

This specific model is currently available in Nepal for Rs. 217,000—down from Rs. 230,000. Likewise, it costs INR 121,000 in India, and about USD 1,300 in the US. But given the fact that its 2022 edition with Intel’s new 12th Gen processor has already been announced, this Helios 300 should undergo some major price-cuts in the coming days—especially in the international market.

On the memory front, you have 8GB of DDR4 RAM and a terabyte of M.2 NVMe PCIe 4.0 SSD. Since this is a gaming laptop, neither of the memory modules are soldered onto the motherboard here. Therefore, you can access the two M.2 and two SO-DIMM slots for memory upgrades if necessary. There’s even a 2.5″ SATA slot to install an HDD or SSD.

the read/write speed of the pre-installed PCIe 4.0 SSD is some of the fastest I’ve ever seen.

Anyway, 8GB RAM is simply not enough for a high-end gaming laptop like this—and that was evident from my overall experience with the Helios 300.

My daily chores consist of browsing the web with a bunch of Chrome tabs opened at once, besides editing documents on LibreOffice Writer, listening to some tunes on Spotify, and even editing light photos on Photoshop every now and then. 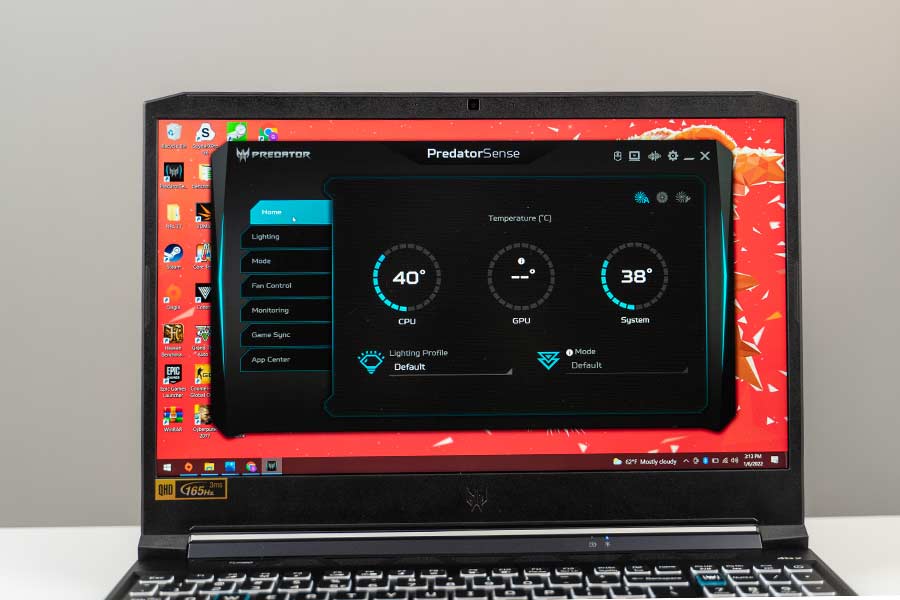 Under this, the laptop would occasionally fail to keep all the Chrome tabs in memory even when turning on the Turbo mode. This is best visualized on CPU-intensive games like CS: GO, where the Helios 300 is noticeably behind, compared to the MSI Katana GF66 with the same Intel CPU, but 16GB RAM.

To compare, the latter hits 240-260fps on average at the game’s highest graphics settings, which is about 30% higher than the Predator. I’m talking about 1080p gaming here, by the way.

On the other hand, GPU-intensive games take quite a toll on this laptop. Cyberpunk 2077 starts off at a decent 28-30fps under High texture quality and Ultra ray tracing, but it quickly drops down to about 20-24fps after mere 10-15 minutes into the game.

But dialing it down to Medium, one can expect a respectable 35-40fps on average. Similarly, Control is well playable at its highest settings here, giving off 39-45fps, whereas GTA V posts 89-95fps on average. By the way, I tested all the games with the Turbo mode turned on and kept DLSS and VSync off wherever available. So, you’ll get even better results when turning on DLSS on games like Cyberpunk 2077 and Control.

By now, we’re pretty familiar with the excellent single-core performance of Intel’s 11th Gen processors. And the i7-11800H is an excellent example. Moving on, managing all the heat are a couple of Acer’s 5th Gen Aeroblade 3D fans, three heat pipes, air exhaust vents on the sides and the back, and the intake vent on the bottom. 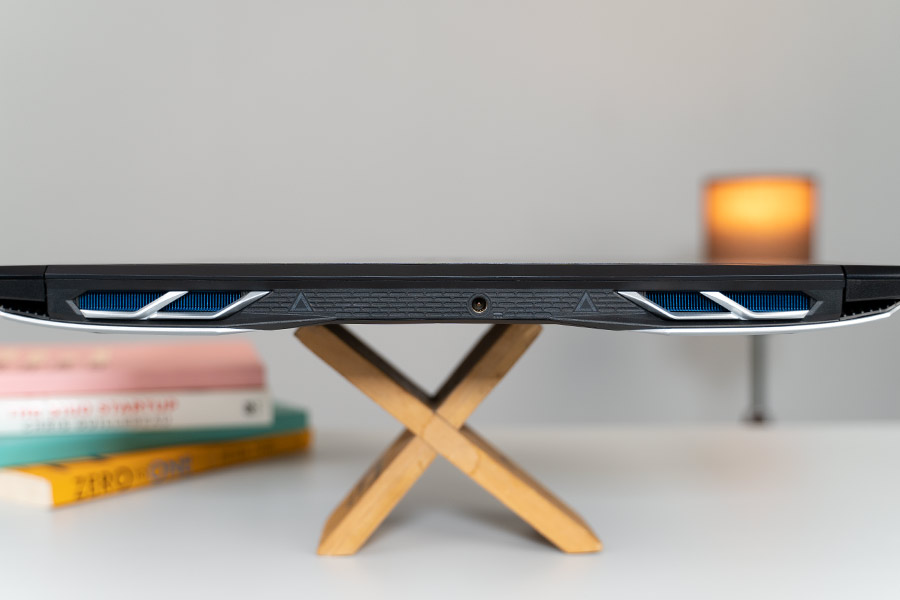 At its highest, I noticed the CPU and GPU temperature on the Helios 300 to be around 81 and 75°C, respectively. After more than an hour of continuous gaming, the WASD key area remains relatively cooler than the rest of the keyboard chassis.

But come summer season, the rise in the average ambient temperature should result in slightly worse thermal performance for this laptop. Almost forgot—switching to the Turbo mode blasts the fans to their highest speed, which means louder fan noise. So you’ll definitely want to put on a decent pair of headphones for the best gaming experience on this laptop.

In terms of battery, Acer has been confident enough to ship the same 59Wh battery on the 2021 edition of Helios 300 like its predecessor. And that’s incredibly misplaced confidence if you ask me! At a time when 70-80Wh batteries are getting common on gaming laptops, this is honestly really underwhelming. With brightness set to around 50%—on top of Default performance mode and Auto fan control—this laptop lasted me about 3-4 hours only under lightweight usage. Fueling it up is a 230W AC power adapter that takes about 2 hours to fill up the battery.

So there you have it, our review of the Acer Predator Helios 300 (2021). Based on everything I’ve discussed so far, you might have already guessed that I’m pretty fond of this gaming laptop. It features a solid build quality and an almost-excellent display—barring the brightness level of course.

Apart from this, the Helios 300 delivers an equally impressive gaming performance, backed by an effective cooling solution. It’s just that the bold visual flair of the Predator lineup feels unapologetically classic as we head on to 2022. And maybe Acer could’ve given an AMD option as well considering all the strides team red had made with its Ryzen 5000 series mobile processors. Unfortunately, even the 2022 iteration of Helios 300 laptops favor Intel CPU—although that doesn’t necessarily feel like a bad thing this time considering how Alder Lake looks superior to AMD’s Zen 3+ based Rembrandt CPUs. But only time will tell just how much of that is true.