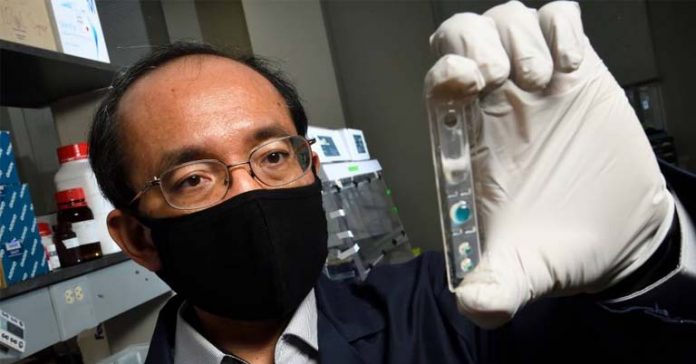 Researchers from John Hopkins University (JHU) have created an app and a low-cost portable device that can diagnose gonorrhea in less than 15 minutes. It can also predict whether a certain strain would react to first-line antibiotics. Gonorrhea is a sexually transmitted infection (STI), and an accurate and prompt diagnosis will greatly aid in the patient’s recovery.

Here, gonorrhea is the second most prevalent STI in the United States. Over time, it has become highly resistant to the medications used to cure it. The disease has already affected more than 87 million people around the world. And antibiotic resistance is exacerbating the condition.

A team led by scientist Tza-Huei Wang from Johns Hopkins University has developed an app and a portable device to diagnose gonorrhea. The new device is PROMPT (portable, rapid, on-cartridge, magnetofluidic purification and testing platform). It runs on a simple five-volt battery and includes thermoplastic cartridges that cost about $2.

Testing from this system is not at all time-consuming. It needs a swab containing the patient’s body fluids, which reacts with a magnetic particle solution in a tube. After mixing it up, a drop of liquid is loaded into a cartridge, which is then inserted into the device. The liquid particles contact with reagents in the cartridge, which performs 40 cycles of polymerase chain reaction (PCR) testing before displaying the results on a smartphone.

The outcome of the testing process is what is essential here. According to JHU, PROMPT testing in Baltimore and Kampala, Uganda correctly diagnosed the most prevalent strain of gonorrhea about 97 percent of the time. Furthermore, the device can fully detect (100%) whether the measured strain of the disease can react to ciprofloxacin. It is an antibiotic to treat infections that are immune to other antibiotics.

“Our portable, inexpensive testing platform has the potential to change the game when it comes to diagnosing and enabling rapid treatment of sexually transmitted infections,” says team leader Tza-Huei Wang.

The team has decided to make this device available to people whenever they needed it. As a result, Wang and his team plan to set up a new company to handle regulatory approval, manufacturing, and delivery of the product.