Handheld gaming devices are nothing new. In fact, many of us probably grew up with one. From the iconic Nintendo Game Boy to the PlayStation Portable, these video game consoles were the go-to pastime for most 90’s kids. Fast forward to 2022, the Nintendo Switch lineup pretty much dominates the handheld gaming arena—alongside a few small brands trying their best. One such company is Aya Neo. And in this review, I’ll be discussing the Aya Neo Pro 2021 Windows gaming console.

Founded in 2020, Aya Neo has seen great success in such a short period. I’ve been using the Aya Neo 2021 Pro for over a month and I can definitely see why people love this thing! Although it is one of the most powerful handheld gaming devices—one that’s capable of running a huge library of PC games—this device is targeted towards a very niche crowd. Not to mention, at USD 1,215, it’s quite expensive as well!

What about the competition?

To compare, the USD 649 (512GB) Steam Deck sounds like a much sweeter deal of the two. Besides the favorable price itself, it can play entire games from your Steam library and also dual boot on Windows.

However, it’s just hitting the shelves after almost 6 months of the announcement—and Valve is only selling the Steam Deck in a handful of regions including the US, Canada, UK, and the EU. That’s not to say the Aya Neo Pro is readily available everywhere, but you get the point.

In terms of design, this thing is reminiscent of the Nintendo Switch while being slightly bigger and bulkier. I have it in the Dark Star color option, whereas you can find it in Light Moon or a vintage-themed “Retro Power” color scheme as well. The matte finish certainly looks and feels nice even though the Aya Neo Pro has an all-plastic construction.

There are no weird creaks or anything—except for a minor gap at the top vent that results in some clicky noise when applying some pressure. Moving on, the Aya Neo Pro is pretty heavy for a handheld device.

At 650 grams, it’s fine for casual gaming but I often found myself searching for something to lay my wrists on during longer gaming sessions. Regardless, the control and trigger buttons are placed at just the right place and are therefore easy to get used to.

On the left, we have an analog thumbstick which is also clickable. Below it is a classic D-pad and four additional buttons: one for rumble on/off, one Xbox button that brings out the Xbox Game Bar, and one Start and Select button each.

Over on the right side are the ABXY gaming buttons, right analog stick, and 4 more hotkeys to make navigating through Windows OS on this touchscreen a little simpler. There’s one that triggers the Windows menu, one for the Task Manager, one for the on-screen keyboard, and one Escape key.

Plus, the keyboard button can also launch the Aya Space if you have it installed.

Moreover, the top frame houses the left/right shoulder and trigger buttons alongside the power and volume toggles. Here, the control buttons and triggers feel responsive and smooth, although the joysticks could have been better. One more thing, all the extra buttons on board that I discussed earlier have relatively short key travel, so their tactile feedback isn’t that great.

As for I/O, there’s a 3.5mm headphone jack at the top—which would’ve been more convenient if it were placed on the bottom. There’s no USB-A connection available but you’ll find a total of three USB 3.2 Gen 2 Type-C ports here, two of which also support DisplayPort 1.4 and Power Delivery.

Therefore, even if you don’t have the docking station, you can hook it up to an external monitor or a TV—provided that you have the right cables and adapters, of course. To make up for the missing USB-A port, Aya Neo does ship a couple of USB-A to USB-C adapters inside the box. Besides this, you’ll find a couple of stereo speakers on the bottom frame. And they’re… not that good. Neither do they get very loud, nor do they have a respectably wide soundstage.

Let’s now talk about the display. Aya Neo Pro brings a 7” IPS touchscreen with a 76% NTSC color gamut, which delivers decent colors and viewing angles. With 1280 by 800 pixels resolution spread across a tiny display, there’s no visible pixelation either.

More importantly, this HD resolution enables the Aya Neo Pro to run most games with respectable fps since the GPU isn’t stressed to push that many pixels here.

On the other hand, this handheld gaming console can hit 500 nits of peak brightness which is quite impressive. But the brightness level is where things get a little tricky. While it maintains visibility perfectly fine in a well-lit room or when you’re outdoors, it just can’t get dim enough. 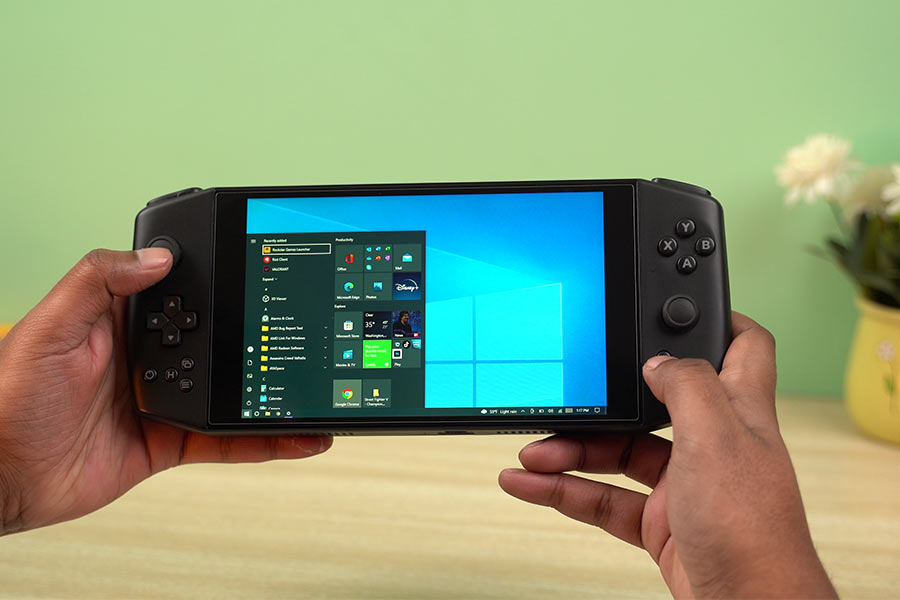 Say you want to play some games curled up inside a blanket in this freezing weather. Even when keeping the brightness level to 0%, it’s too bright for my eyes. As a result, I’ve had to resort to third-party applications like “Dimmer” to get this display to somewhat comfortable levels. Then there’s the rampant backlight bleed issue infecting this screen.

Sure it’s no problem when playing games with a daytime setting, but it has the potential to pull you off the immersiveness in something like Control that tends to literally get dark at times. Likewise, this display’s glossy finish means it’s incredibly reflective as well.

Okay, allow me to get into the software side of things now. The Aya Neo Pro boots on Windows 10 and is even Windows 11-compatible. For all my benchmarks and gaming tests, I stuck with Windows 10 since there are still some hiccups—major and minor—with gaming on Windows 11.

Then again, a keyboard-less Windows experience is far from ideal, and getting used to navigating the Aya Neo Pro certainly takes some getting used to. While Aya Space comes pre-installed on newer consoles from the company, we had to install it separately. This is basically a performance hub for Aya Neo devices that’ll let you access all the installed games, adjust performance profiles, view system status, and much more.

It also lets you switch between the intensity of the vibration feedback but the app straight up crashed a couple of times I tried it. Then there were a few instances where it seemingly worked, but I was greeted with a “Controller Disconnected” prompt when getting back to the game.

Finally, let’s talk about its performance. Powering the Aya Neo Pro is AMD’s Zen 2-based Ryzen 7 4800U mobile CPU. This octa-core processor features Radeon Vega 8 GPU with 8 cores, clocked at up to 1.75GHz. As you’d expect, this combo is powerful enough to handle all the latest and greatest games with adjusted settings.

You obviously won’t get to enjoy every title with pristine graphics quality, but I’ll trade off better graphics for smoother gameplay any day of the week. Complementing this is 16GB of LPDDR4X RAM in dual-channel (4266MHz) and a whole terabyte of M.2 NVMe SSD with significant read/write speeds.

On the gaming front, even when overclocking it to 30W—which is beyond the 20W default limit—the results don’t look that impressive for 50% more power consumption. So, I tested all the games at the 20W “Game” mode, where most AAA games averaged at about 25-40fps at their lowest settings. 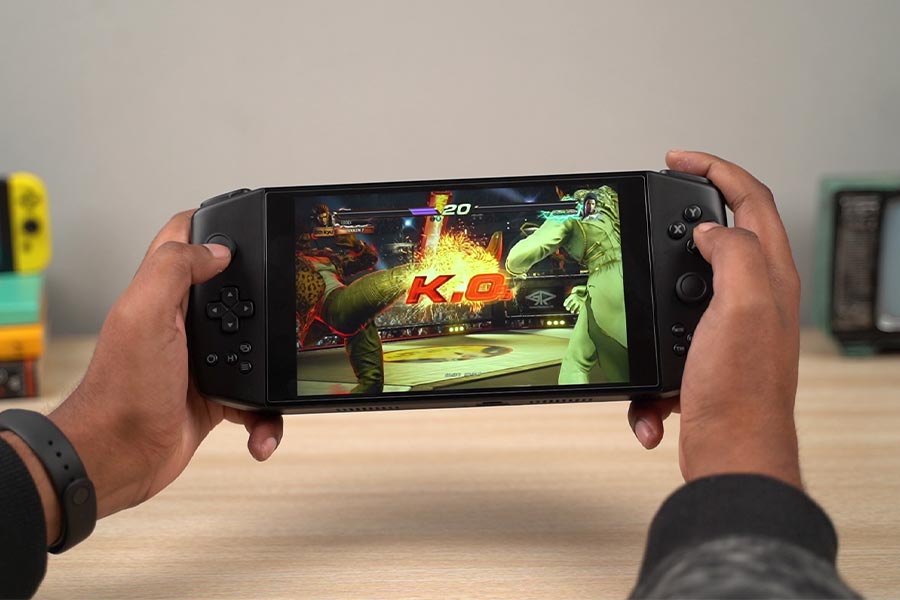 On the other hand, light-medium games can hit stable 60fps when meddling through the settings a little.

For instance, Assassin’s Creed Valhalla delivers 38fps on average at low settings, which is about 60% higher than when playing at high settings. Aya Neo also highlights that this thing can handle Cyberpunk 2077. But even at the lowest graphics settings, it managed just around 27fps on average. Relatively less-demanding titles like GTA V and The Sims 4 do hit 58-60fps even at high settings.

Similarly, Tekken 7 is well playable at low settings with a stable 60fps but I struggled to play fighting games like this with these controls.

The last time I remember playing Tekken and Street Fighter was with arcade gamepads.

So, this is a “me” problem and not an “it” problem. Furthermore, I thoroughly struggled with FPS games like CS: GO and Valorant on the Aya Neo Pro because I’ve never tried these games on controllers before. And unlike an Xbox or PlayStation, you don’t get aim-assist on Windows machines either. Sandbox RPG games like GTA V, Assassin’s Creed, Control, Aer, etc. are easy to navigate and get around though.

Adding to the gaming experience is the X-axis linear vibration motor that’s unpleasantly set to “strong” by default. So I switched to the “slight” profile for more subtle vibration feedback instead.

For the most part, it does enhance the gameplay—especially in racing games like Forza Horizon 5—where in-game events like the engine revving up or a crash are well replicated by the vibration motor. 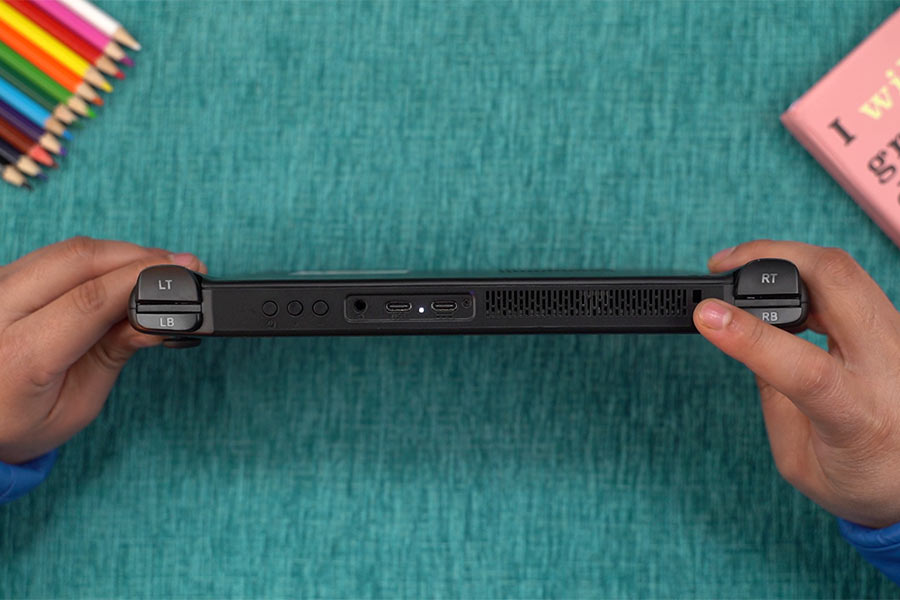 Handling the thermals is the single air-intake fan at the back and an exhaust vent at the top. If you have large hands, chances are you could block the intake a little depending on how you’d grip the device. But this wasn’t that much of a trouble for me.

Then again, the Aya Neo Pro warms up pretty fast even when turning on the “Excellent” fan profile that cranks the fan speed fast as 4700 RPM—although the fan noise isn’t that bothersome even at its loudest. Unless you’re blocking the ventilation in some way, the surface temperature never hits the “uncomfortable” territory, which is fantastic!

Fueling the Aya Neo Pro is a 47Wh battery that supports 60W USB PD charging. I’d say its endurance is just about decent. 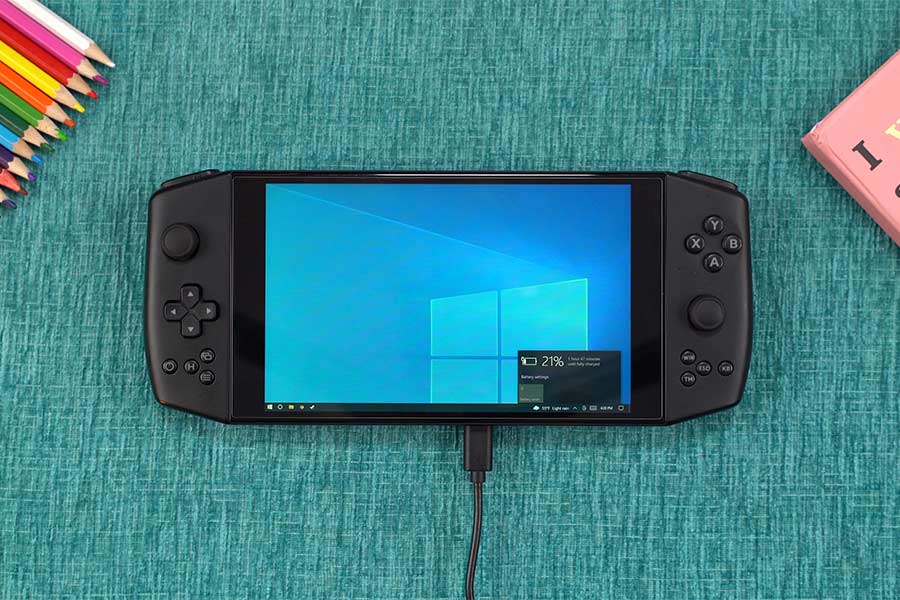 Playing games at 50% brightness under the 20W TDP profile, it lasted me about 1 hour and 45 minutes—but I was able to squeeze out an extra hour or so of screen-on time under medium and light games. Using the 60W adapter provided inside the box, it takes around 2 hours to fuel it completely.

Wrapping up this review, the Aya Neo Pro 2021 is a fun and capable handheld gaming PC to have. Like I mentioned in the beginning, this thing is for a niche group of consumers and if you fall under the target demographics, you’re probably gonna love it. It runs on Windows—and thereby lets you play your PC games anywhere. Not only that, the powerful AMD processor underneath is well-equipped to handle most current-gen games as well.

Now, even though it achieves what it’s set out to do, the Aya Neo Pro is extremely expensive. So if money is no object to you or you can’t wait for the Steam Deck to arrive—the Aya Neo Pro is as good as it gets.