Valve has announced its first Nintendo Switch-like handheld gaming console, called the Steam Deck. It lets you play your favorites Steam games on the go. So, let’s get into the specs, features, availability, and expected price of Valve Steam Deck in Nepal.

If you’re unaware, Valve is a video-game developer company that also has its hands in the hardware business. It is behind the popular titles like Dota 2, CS: GO, and others.

Here, the Steam Deck is similar to the Nintendo Switch (or Switch OLED) in that it is a handheld gaming machine with full-sized controllers. It also has a detachable dock that allows you to easily connect it to an external monitor. 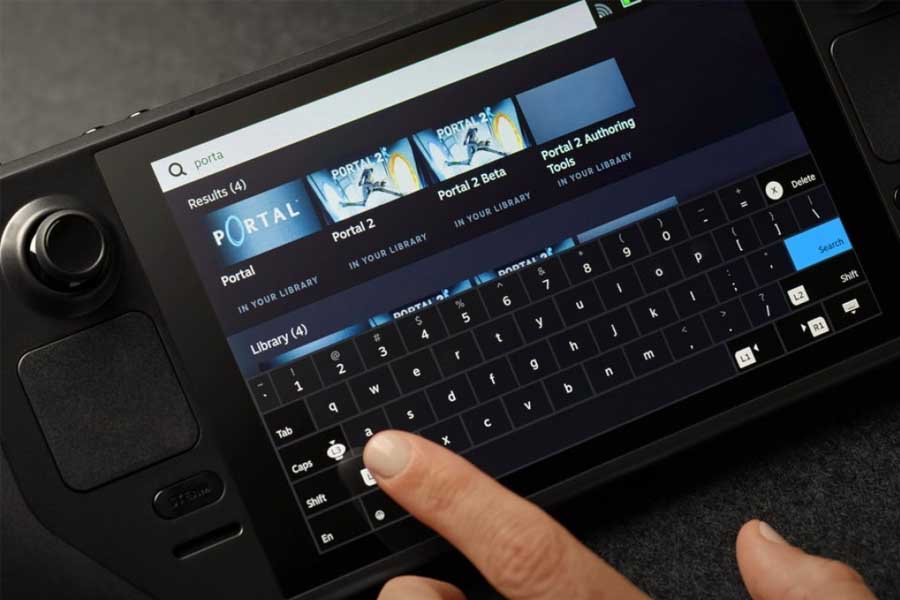 As per its specifications, it is more than a simple game console—it’s a portable PC. Powering the device is an AMD APU with Zen 2-based 4C/8T CPU that has a max turbo frequency of 3.5GHz. On the GPU front, it features octa-core Radeon graphics based on RDNA 2 architecture. Valve says this APU has a configurable TDP between 4 – 15W.

However, the company has confirmed that despite the difference in storage protocols, “there is no in-game difference in frame rates or graphics quality”. In terms of software, the Deck boots on Arch-based SteamOS 3.0. You can even install Windows on the Steam Deck if you’d like.

Furthermore, this handheld gaming PC is crammed with all the controls you’d expect to see on a console. It has A, B, X, and Y buttons, as well as a D-pad, L and R analog triggers and bumpers, View and Menu buttons, and four assignable grip buttons.

Similarly, there are two 32.5mm square trackpads on the left and right. When compared to the Steam Controller, these trackpads offer 55% lower latency. For easier control, it includes a 6-axis IMU gyroscope too. On the wireless connectivity front, it utilizes Bluetooth 5.0 and dual-band WiFi (ca). Unlike the Nintendo Switch, it supports Bluetooth audio as well. Additionally, there’s a USB 3.2 Gen 2 Type-C port with DisplayPort 1.4 support that is capable of transferring up to 8K videos at 60Hz.

Besides all of this, the console boasts a stereo speaker setup with a dual-microphone array and stereo 3.5mm headphone jacks. Likewise, with 40Whr of battery, Valve promises up to 8 hours of gameplay (depending on the game).

Steam Deck, like the Nintendo Switch, has a dock that lets you connect it to your computer or monitor. This USB Dock provides Display Port, HDMI 2.0, an Ethernet adapter, and three USB (2x USB-A 2.0, 1x USB-A 3.1) inputs. As expected, you’ll have to buy it separately although Valve hasn’t confirmed the price just yet.

The price of Valve Steam Deck starts at USD 399 for the 64GB model. The company will start its shipping in December in the US, UK, Canada, and EU while other regions will have to wait until 2022. We expect the price of the Valve Steam Deck in Nepal to start at around NPR 57,000 if it launches here.