Konka is a pretty familiar name in the TV market. And the UDL65NR672LN is pretty special because it runs on LG’s WebOS platform instead of the usual Android TV OS that you get on most other TVs. WebOS is pretty renowned for its clean design and overall ease of use, so this Konka TV could be perfect for those who want a simple UI, above everything else. Complementing this is LG’s Magic Remote which gives you an easier way to navigate through the TV. 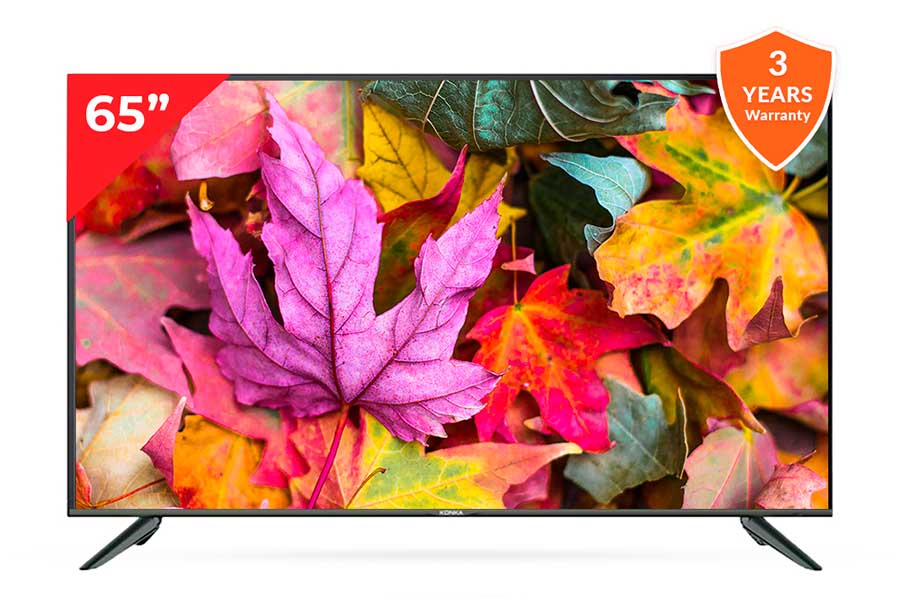 And enhancing the TV experience here is Konka’s XC3 UHD Engine for tuning colors, contrast, details, and more. But the company has used a TFT panel instead of IPS, which means it does have somewhat compromised viewing angles. Other than that, its audio setup is just about average only since Konka has gone with an underwhelming set of stereo speakers with just 10W output.

The fifth entry on our list of best 65″ 4K TV under NPR 1.5 lakh in Nepal is the Panasonic TH-65HX750M. This one’s a smart TV as well but instead of LG’s WebOS on the Konka TV above, this guy runs on Android TV 10. So that means you can enjoy all your favorite Google apps here on top of all the streaming platforms like Netflix, Amazon Prime Video, and more. It also has Chromecast built-in for wirelessly streaming your phone’s content onto the TV. As for the display itself, the TH-65HX750M has the Panasonic’s proprietary 4K Color Engine. According to the company, it tunes the dark and bright areas of any scene for a more immersive viewing experience. Panasonic also claims superior color reproduction on this TV thanks to the Hexa Chroma Drive. This uses 3 additional complementary colors (CMY) on top of RGB for a richer color palette. It also has a nice audio setup with Dolby Audio and DTS Studio Sound support.

Next up is the TCL 65P615. TCL’s “Series P” lineup of 4K televisions are pretty well known for their excellent utility and value-for-money, and it’s no surprise that the 65P615 has found its way onto our list of best 65″ 4K TV under NPR 1.5 lakh in Nepal. Matter of fact, this is also the most affordable entry on our list right now, which makes it doubly impressive. 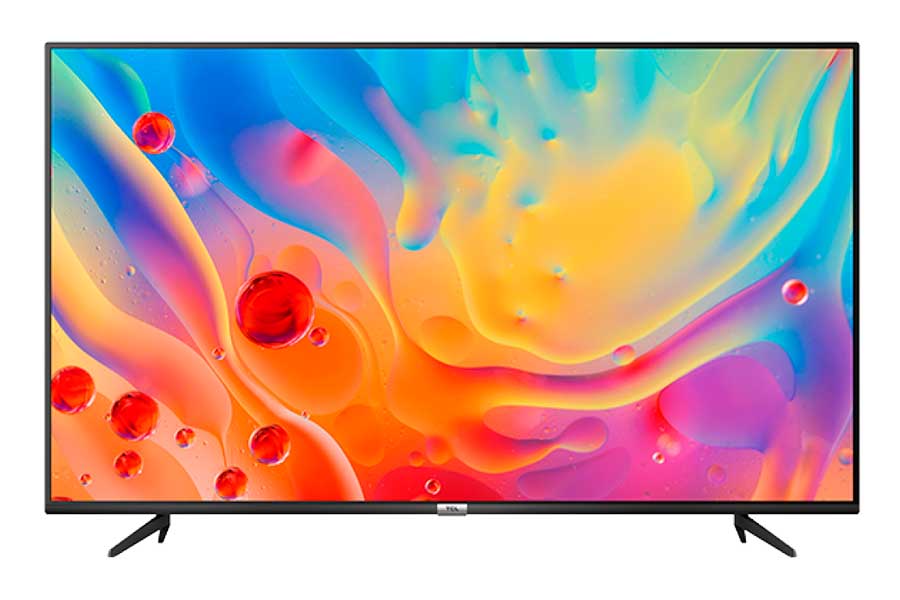 This TV has TCL’s 4K UHD upscaling technology for sharper details and clarity, whereas it also features micro dimming and dynamic color enhancement for great contrast and colors. It also brings a set of stereo speakers with Dolby Audio support. Since the TCL 65P615 runs on Android TV OS, it comes with Google Assistant support for quick navigation among other things.

But if you want, you can also use Alexa voice assistant here. And if you’re someone who watches a lot of fast-paced content like sports, then TCL’s Clear Motion Rate (CMR) is also something that you’d want. This feature basically reduces motion blur for enhanced visual clarity. Just make sure you turn it off for regular content, otherwise they’re gonna look rather eerie.

And taking the third spot on our list of best 65″ 4K TV under NPR 1.5 lakh in Nepal is the Hisense 65A7400F. This guy comes with minimal bezel on all four sides for a more modern visual aesthetics. It is tuned by Hisense’s “Precision Colour” and “UHD AI Upscaler” technology for greater color and clarity. And for richer contrast with brighter whites and darker darks, it supports ultra dimming for dynamically controlling luminance in different regions of the display. 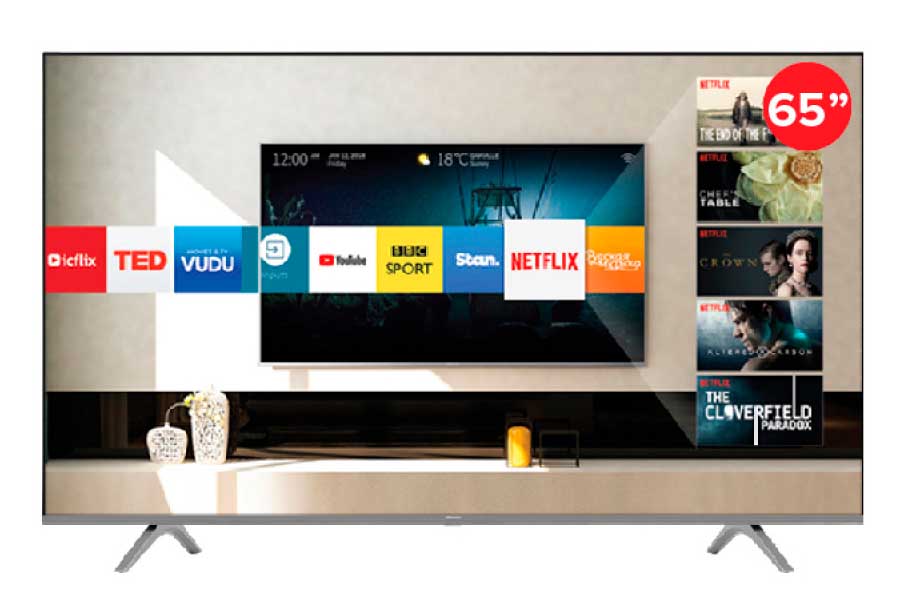 Furthermore, the Hisense 65A7400F is also loaded with Dolby Vision HDR for even better contrast and color details. Apart from the usual HDR10 and HLG standards. Its 2x 13W speakers support DTS Virtual:X surround sound and Dolby Audio technology as well. So you can enjoy movies or shows with much more aural depth here—although you’d still want to invest in a decent home theater system for the best experience. This Android smart TV has voice control remote with Google Assistant support too.

Moving on, the LG 65UP7550 claims the silver medal on our list of best 65″ 4K TV under NPR 1.5 lakh in Nepal. LG is the go-to brand for TV and other home appliances for many people in Nepal, and this guy is a fantastic 4K TV as well. With its clean design, great screen, rich sound quality, Magic Remote, and all the rich features introduced by the webOS platform, the 65UP7550 offers a great smart TV experience. Thanks to LG’s a5 AI Processor and 4K upscaling engine, this TV delivers crystal clear content. Although it doesn’t support Dolby Vision HDR, the company has used HDR dynamic tone mapping alongside HDR10 Pro (which is just LG’s name for HDR10 standard, by the way) for customized brightness levels when binging HDR-ready content. And it also supports the coveted “Filmmaker Mode” which automatically tunes your TV’s picture quality for the best cinematic experience. There’s also the newer LG 65UP7750 with a bunch of AI features, which costs about NPR 15,000 more than this.

Finally, the number one spot on our list of best 65″ 4K TV under NPR 1.5 lakh in Nepal goes to the Samsung UA65AU7700. Unlike other smart TVs here, it runs on Samsung’s proprietary Tizen operating system. Although it lacks Google Play Store support, Tizen OS is quite feature-rich and you’ll find most apps like YouTube, Netflix, Amazon Prime Video, and others on Samsung’s app store. As for the display itself, this 4K TV comes with Samsung’s “Pur Color” technology for more vibrant color details. There’s also UHD micro dimming and HDR10+ support to enhance contrast in any given scene. 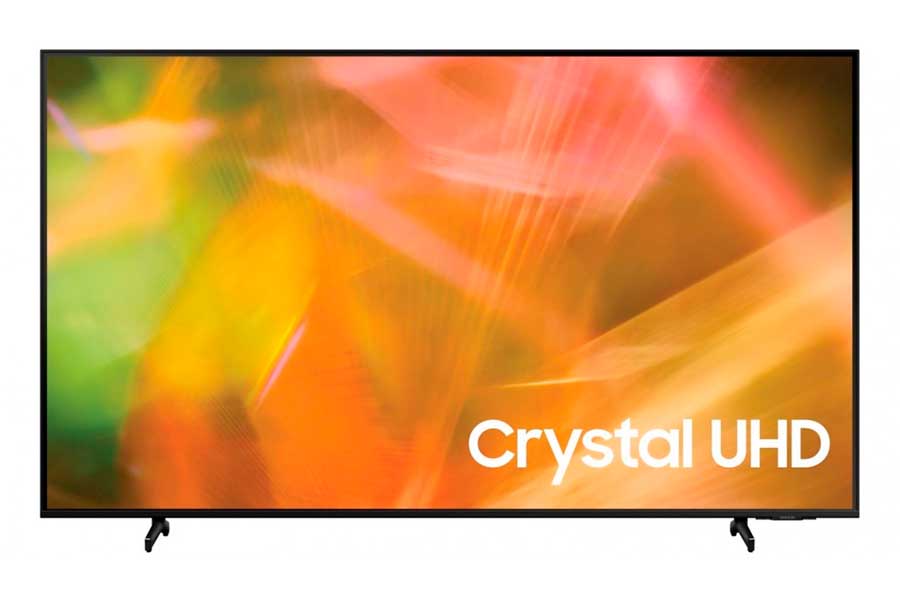 You can also wirelessly connect your smartphone, laptop, or PC to this TV to simply your workflow. In terms of audio, Samsung has gone with a couple of 10W speakers with Dolby Digital support. And it even features Q-Symphony technology where both the TV speakers and external soundbars can operate at once. Powering the whole thing is Samsung’s own Crystal Processor 4K.