Home Analysis The impact of COVID-19 on the smartphone industry! 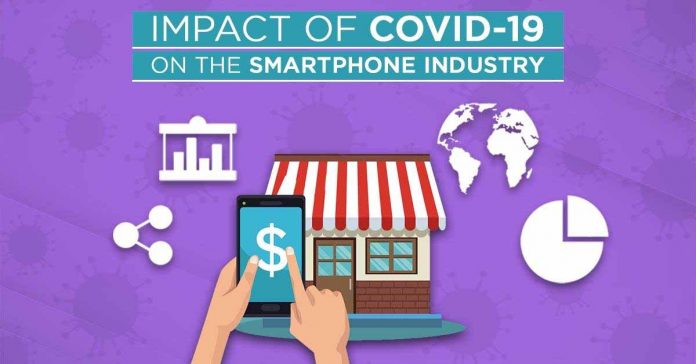 It is absolutely heart-wrenching to see how the global coronavirus pandemic has taken the lives of many; on top of creating an unruly commotion throughout the world. Our thought goes out to everyone facing this tough time and we pray for the best. This is of the most well documented global catastrophes in human history – a sad record. And we hope you guys are following all the precautionary measures like wearing masks, washing hands, maintaining social distance, etc. to minimize the spread of the virus. People’s life is in a state of chaos due to COVID-19, and so is the economy (therefore the smartphone industry). Factories are shut down, productions have been halted, people have been left jobless – I mean, the whole world is in shambles.

Some countries like China and New Zealand have had some success in fighting off the virus; things are gradually returning to normal there. Yet, the pandemic is far from over in other parts of the planet.

COVID-19: Impact on the smartphone industry

Though essential businesses have been open because of the nature of their operation, others have had to close shop. Because of the state-mandated lockdown in many countries, the smartphone (or rather yet the electronics industry as a whole) has suffered some major setbacks. We’re not only talking about production and sales here. The direction the industry had been heading towards before the whole ordeal has now completely changed its course. And sadly, it’s going to take years for OEMs, designers, and other affiliated parties to catch up to the point they once hoped to have reached.

But ultimately, it is the buyers who are going to face the unfair wrath of the industrial predicament.

Let’s start with the most fundamental analysis. China is the home to most companies’ manufacturing plants; due to its technological superiority and low cost of operation. However, the rigid dependence upon the country is slowly losing its dominance as companies have begun setting up factories in other countries like India and Bangladesh. Just last year, as a result of its ever-shrinking market share in China, Samsung abandoned all of its production plants in the country and is now investing in new territories.

And now, COVID-19 has “crafted” and intriguing avenue in the smartphone industry. As the origin center of the epidemic, China had the first-hand experience in the now-global situation. With local & international companies ceasing manufacture left and right, the circumstance had painted a vivid image of how the industry would be crippled; should the magnitude of reliance stay constant. I can even imagine the CEOs of such companies rushing to formulate an escape plan. After all, that is a logical move and very few people had even predicted that the pandemic would shape up to take the form that it has now. In short, the virus did give some ideas of expanding the production geography portfolio to many non-China based firms.

Anyway, coming to the present time, the whole “underestimation of China” things seems pointless now. Because of strict government regulations, China has managed to contain the virus to a great extent. And because of this, as I said earlier, things are returning to the way they were. Big names like Tesla have resumed operation and that’s only the tip of the iceberg. The second-best option – India, is still struggling to make a mark against the virus. That makes China, still the safest bet when it comes to smartphone manufacturers’ production needs.

But wait, just because production is possible, doesn’t mean everything’s alright now. The demand for smartphone components has dramatically surged with OEMs recognizing the eventual decline in consumers’ purchasing power and purchase decision. I’d once again like to bring up Samsung as an example, where the company has now decided to cut down its monthly smartphone manufacture volume by more than 50% (from 25 million to 10 million) according to some industry sources. Let’s take a deeper look. There are also companies like Foxconn, who is a “contract electronics maker”. This Taiwan-based company is the manufacturer of Apple’s iPhones, components for companies like Dell, Sony, among others. And most of the time, the company has a schedule regarding what to take into production.

Only after the delivery of one client’s contract, can the process for the next client begin. Yet, due to COVID-19, the aforementioned contracts have been “void” – in some way. Foxconn has since resumed its operation amidst taking precautionary tactics to meet the demand of one of its largest clienteles – Apple.

The thing is, we all know when we can expect a new generation of iPhones and that is September of every year. With each iteration, the total unit demand has only grown throughout time. But this time, even Apple has had to push the mass production of the upcoming iPhone 12 series by a month because of production limitations. Therefore, the new iPhones will most likely hit the shelves in October this year. Apple is still kind of on track in its timetable. Because of this, some other firm will be off-schedule by some significant margin; most definitely. The entire smartphone industry is like domino as demonstrated by COVID-19; just a single misbehaving piece can have a crippling effect on everyone involved.

Now let us shift our gears to the second largest smartphone consumer in the world – India. Unlike its neighbor China, things are yet to take a positive turn here in terms of the COVID-19 pandemic. The country is in its second month of lockdown with no immediate end in sight. Here, companies like Samsung, OPPO, Vivo, and Xiaomi have closed their factories; thus drastically reducing the country’s contribution to global smartphone production.

A shift in the public purchase decision

India is also home to some of the most price-conscious consumers in the world. That’s why brands like Xiaomi, OnePlus, and more recently Realme have managed to do so well there. Though the country’s top e-commerce platforms like Amazon & Flipkart have received the government’s permission to resume selling smartphones from May 3, the current market is nowhere near as well functioning as it was a couple of months ago. Sadly, the purchasing decision of customers has now radically changed, with priority set for essential goods; rightfully so. And that’s not specific to India. People throughout the world have shifted their spending concerns to goods of daily requirements like food, sanitation items, etc.

Bluntly put, nobody needs to or should be investing in a brand-new smartphone at this time, unless it’s an emergency.

I don’t believe this mindset of consumers will continue on in the long run, but it will be something hard to erase post haste. I mean, it’s most likely not the first time we are facing a crisis. Tragedies have always befallen us, though not on a global scale like right now. After all, we have in/directly contributed to the way things are, and we’ve made through the past misfortunes. Wow, did I just demonstrate an example of the “Butterfly Effect”? I think I did.

Further damage to the supply chain

I have already discussed how the manufacture of smartphones & other electronic goods have been hampered due to the pandemic. But what about those that were meant to be sold right now, had things not gone south? Well, they’re still in the godowns, the retail stores, sitting unattended and getting outdated & undervalued as days go on.

Despite the rapid incline in online smartphone sales in recent days, brick and mortar stores are still a big part of the industry. And the lack of movement of products only means trouble to the shop-owners and the buyers. You see, any retail store’s most common business policy is to empty the current stock before bringing in the new lot. So, the retail smartphone stores will aggressively try to push the products they have, before ordering the newer models. While that means customers won’t have the option to select from the newest smartphones, you may get great deals on a generation old smartphone when they open up. And honestly, that doesn’t sound bad at all. While this is most definitely a lost battle to the retail businesses, I see it as an unwarranted middle ground from a consumer’s point of view.

But despite all the production delays, shift in buyers’ purchasing decision, or the inability to sell the existing products, you know where the COVID-19 has hurt the worst in the electronics & the smartphone industry? R&D. Companies spend billions of dollars in research & development each year, which is a continuous process of improving the firm’s quality of operation & commodity.

In terms of the smartphone market, it looks like the EUV-based 5nm wafer production is going to take a considerable hit. That’s because ASML is facing issues in transporting its equipment because of travel restrictions that many countries have imposed. Based in Netherland, ASML is the only manufacturer of EUV exposure equipment for semiconductor production.

There’s a two-way race going on between Samsung and TSMC for 5nm semiconductors. However, the latter is already many steps ahead of Samsung in the competition. TSMC has even filled its 5nm demand from companies like Apple, AMD, Qualcomm, etc. Recently, the company also announced that it has delayed plans for testing 3nm chips. But excitingly, it is already working on 2nm chips though they won’t be available until 2025. Samsung, on the other hand, has further pushed back the date of the mass production of its own 3nm semiconductors to 2022 because of production complications as a result of COVID-19.

So you see, the global outbreak of COVID-19 has had a significant impact on the electronics & its subsidiary smartphone industry. Manufacturers now have an uphill battle to recover from the losses incurred because of it. It will be a challenging task to get people to spend the way they used to. It goes on to show that only the most visionary and clairvoyant ones will survive such misfortunes. That’s because such an unexpected turn of events can lead to an unprecedented degree of divergence in the world.