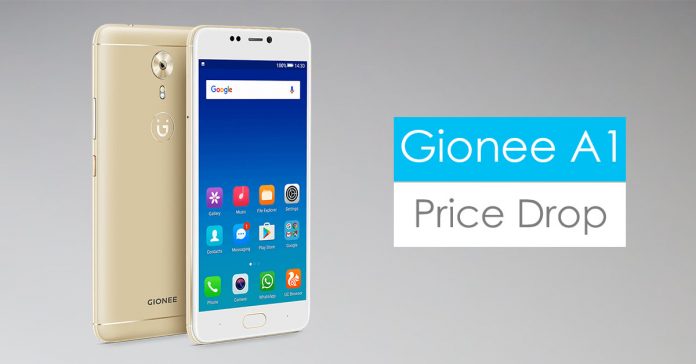 The once flagship phone form Gionee for the Nepali market, the Gionee A1 has received a sizable price drop. With an initial release price of Rs. 29,999, you can now buy the smartphone for Rs. 26,999. So, is the new price tag worth your attention?

The phone was released in April this year, so it’s safe to say it’s a relatively new smartphone. With an up par 5.5″ 1080p AMOLED touchscreen on the front, this device is no slouch in the display department. It also runs on a relatively new version of Android OS, i.e Android Nougat with Amigo OS 4.0 on top.

The Helio P10 inside might be a bummer, but considering the price, it’s not a big deal. Pair that with 4GB of RAM and 64GB of storage, that’s a configuration most high-end flagships hold.

Coming to the camera setup, a 13MP on the front and a 16MP at the back will be more than enough for most people. And that statement isn’t just going by the numbers, the Gionee A1 has a really good camera setup. It is a decent performer in our books.

The battery was also pretty decent with around 5 hours of screen-on-time during our use. What does disappoint are the mediocre connectivity such as Wi-Fi and the lack of USB C which won’t be an issue for most people. The Gionee A1’s top competitors are the OnePlus 3 and the Coolpad Cool1 Dual. The former now costs a hefty Rs. 8,000 more while the latter with its 64GB of storage costs a good Rs. 4,000 extra. The main competitor for this device now is Xiaomi Redmi Note 4 which is about the same price as the Gionee A1. But considering everything it’s still a pretty decent smartphone to buy, especially after the price drop.