Home Gionee Gionee Dashain Offer: Everything you need to know 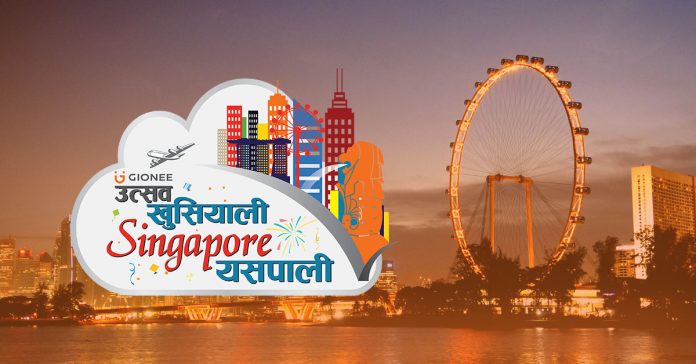 Dashain and Tihar are the festival of joy. These festivals are also a great opportunity for all the interested smartphone buyers. Almost all smartphone distributors have something up their sleeves for this big festival. And the Chinese manufacturer Gionee too has its own take on it.

Gionee Nepal has come up with “Gionee_  सव खुसियाली Singapore_यसपाली” for the upcoming festive season. The company is going to fly 20 individuals to Singapore as its promotional campaign. There are also various other gifts and prizes to go along with it as well. They are also giving away 20 Gionee A1 and A1 lite phones for the lucky winners.

How to participate in Gionee Dashain Tihar Offer:

What’s up for grabs in Gionee Dashain Tihar Offer:

The Gionee A1 and A1 lite are two of the best smartphone offerings from the Chinese manufacturers. If you are in the market for a Gionee smartphone, then you should give these two phones a try.

Gionee A1 is the company’s flagship smartphone for 2017 which replaced the Gionee S6S. Display wise it features a 5.5″ full HD screen. You get an octa-core MediaTek Helio P10 processor with 4GB of RAM inside. It runs on the Nougat version of Android and has a 4000mAh battery inside to keep the lights on.

The Gionee A1 lite is the miniature version of the Gionee A1. This phone has received numerous criticism regarding its high price tag, but putting all that aside, the 20MP front facing camera is one of the best selfie cameras on a smartphone. It still runs on one of the latest Android version and packs the same 4000mAh battery like its bigger sibling, but in a smaller body. The phone is priced at Rs 22,999, but is it overpriced? We will let you decide.

What do you think about Gionee उत्सव खुसियाली Singapore यसपाली campaign? Do let us know!