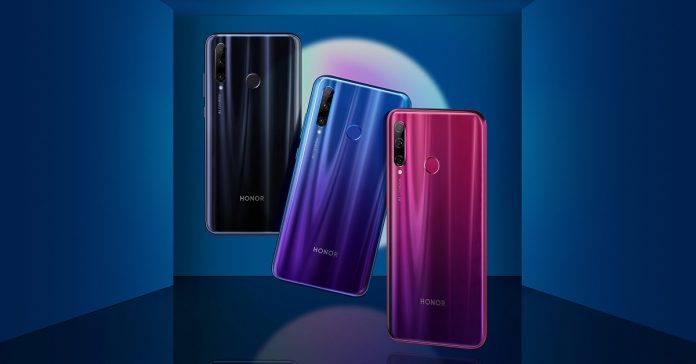 Honor, the subsidiary brand of Huawei is quite known for its value for money devices. And this time, the sub-brand thought of expanding its lineup and brought a brand new Honor 20i smartphone into the limelight. The Chinese smartphone maker lifted up the curtain and showcased four variants of the device.

Most of the Honor smartphones share the majority of specs from the Huawei devices. And having the same parent company, that’s understandable. This time has been no different. The Honor 20i shares most of the specs with the Huawei P30 Lite, which was launched just a few weeks back.

In terms of display, the Honor 20i flaunts a 6.21-inch IPS display, which is a tad bit bigger than that on the P30 Lite. The display comes with a tiny water-drop style notch on the top and features Full-HD+ resolution.

On to the performance part, the phone gets the Kirin 710 chipset. When it comes to the memory side, Honor has four different variants of the device: 4/128GB, 6/64GB, 6/128GB, and 6/256GB. Except for the 6/128GB variant, all of these devices are listed in Vmall, Huawei’s online store. So the 6/128GB variant may not be available for purchase as of now.

Talking about the camera, the flaunts three unique type of lenses on the back. A 24MP primary shooter, an 8MP ultra-wide-angle lens, and 2MP depth sensor, all of them are tucked in the rear panel in a vertical orientation. On the front, however, lies just a single lens. The 32MP selfie shooter rests in solitude in the notch atop the display.

Software-wise, the phone boots on Android Pie out of the box with Huawei’s latest EMUI 9 on the top. The phone also comes with 3400mAh battery and uses Micro USB 2.0 port for charging.