For years now, the Spectre lineup was HP’s premium laptop range. However, that is about change now. Today, the laptop manufacturer announced a host of laptops in its Envy lineup. There’s a redesigned Envy 13, Envy x360 15 and most importantly the Envy 15 2020. The new HP Envy 15 is a premium addition to the company’s usually affordable Envy lineup. Thus, it won’t come cheap, though the spec-sheet suggests that it will prove to be money well spent. I am excited about this device, so hopefully, the price of HP Envy 15 in Nepal will not be higher than its international price. We’ll get to the prices soon, but first, let’s see what this device brings to the table.

The HP Envy 15 has been retooled to cater to a very specific group of people, namely – content creators, videographers, photographers and so. This means that this laptop will be a competition for the likes of MacBook Pro 16 and Dell XPS 15. Now, these laptops that I just mentioned are some of the best out there. I mean the MacBook Pro 16-inch has been touted as the most powerful MacBook ever. Similarly, the Dell XPS 15 is said to be a monster of a laptop. So, it won’t be easy for the HP Envy 15 to compete with them. However, the specifications suggest that HP brings in its flare to the table and will probably be a worthy competitor for those two.

The design, for the most part, remains similar to the past Envy designs. It has a minimalist silver design with sharp corners and clear linings. This device weighs around 4.7 pounds and measures 14.1 x 9.3 x 0.7 inches. I have to say the uniform color does keep the aesthetics of the laptop pretty simple. Moreover, on the inside, there are silver keys that align perfectly with the single color tone of the laptop. And there are two Bang & Olufsen powered top-firing speakers on either side of the keyboard. Now, this design might remind you of the Razer Blade 15, which had a similar speaker and track-pad positioning.

Moving on, the display on the HP Envy 15 looks like a gem. It is a 15.6-inch 4K HDR AMOLED panel with narrow bezels. It has 100% DCI-P3 color calibration and Delta E < 2. This means the display will be excellent for its aimed customer group i.e. content creators. If the performance is as good as the specifications suggest, then it will probably end up attracting more customers than the MacBook Pro 16-inch. 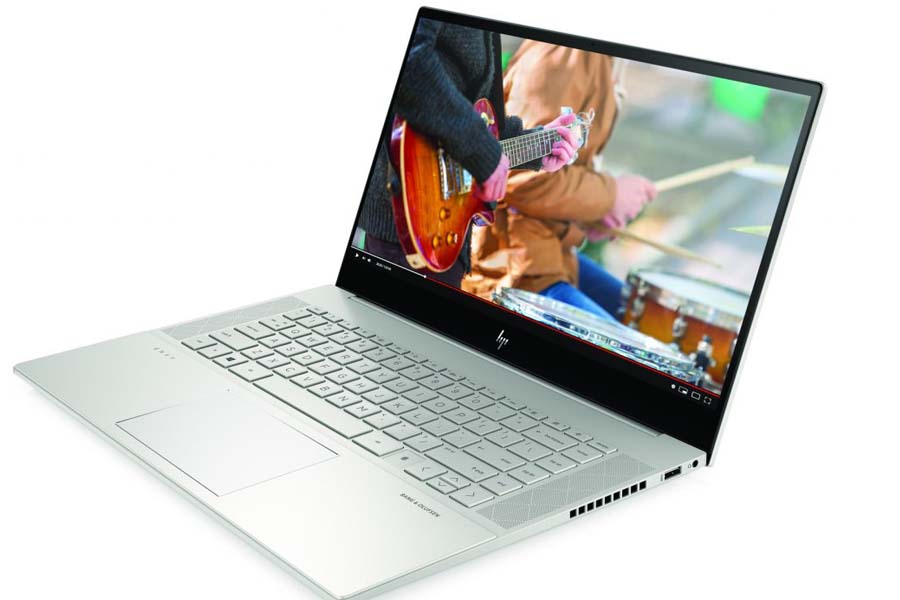 As mentioned above, the color of the keys on the HP Envy 15 matches the overall tone of the device. It doesn’t have a Numpad. However, you do get dedicated keys for frequently used apps. The shortcut keys can be used to access the camera, HP Command Center, and more. Moreover, their placement of the fingerprint sensor on this one is also quite intriguing. It is now placed on the left of the arrow keys.

The HP Envy 15 contains the latest Intel 10th Gen Core i9 processor. It is complemented by 32GB DDR4 RAM and 2TB of RAID 0 storage. As for the graphics, the device packs in the Nvidia GeForce RTX 2060 Max-Q graphics.

It has an improved thermal design that helps to deliver the best performance even while using graphic-intensive apps. According to HP, this device will be 33% faster than the previous 15-inch MacBook Pro while editing videos via Adobe Premiere Rush CC. However, the Nvidia graphics will still not be enough to run every triple-A title fluidly at the max setting.

As the HP Envy 15 is going to be pitted directly against the MacBook Pro 16 inch, we’ve listed a spec-wise comparison between the devices down below.

The other laptop that was announced today was the HP Envy x360 15. It is a much toned-down version of its standard Envy counterpart and as a result, will cost much less. The great thing about x360s is that they are convertible, i.e. you can bend them all the way and use it as a tablet.

You can buy the new HP Envy 15 from the company’s official website and sites such as Amazon, Costco and more starting from June 2020. As for the pricing, the starting price, most probably for the Core i7 version, is $1349. We are still in the blind regarding the price of the higher-end variant.

With the lockdown in place for the foreseeable future, we can not exactly give a specific release date of the device in Nepal. But I guess that we should see this device in our market around late August. Talking about the cost, the price of the HP Envy 15 in Nepal should be around Rs. 180,000.