Huawei, the maker of the Nexus 6p, is the widely known worldwide for providing specs-heavy phones at cheaper prices. It is with the release of Huawei P9, people started to talk about cameras right before talking about other aspects of the phone. Dual-cameras in the back is something we’ve been seeing a lot in high-end flagships lately but there are only handful of mid-range devices to sport the dual-cam setup and Huawei GR5 2017 is certainly one of those. Under 30,000 price segment, Samsung Galaxy J7 prime and Xiaomi Redmi Note 3 are being sold like hot cakes in the Nepali market. So can this phone stand out the crowd and make its strong standings among the phones in similar price range. Let’s find out from this review, if Huawei GR5 2017 is the best camera phone you can buy under 30K or not.

Huawei GR5 doesn’t sport any unique design but does look classy. The phone, with a curved back and rounded edges,  feels premium while holding. From the front, it looks like an iPhone-wannabe. On the back, it is almost all metal with plastic panels at the top and bottom. The vertically placed dual cameras in the back can be found near the top. The third generation rounded fingerprint scanner is well placed just below the rear cameras. All in all, the build quality is top-notch but the phone is a little slippery with its smooth finish. So, snapping a back cover or putting in some skins may be considered a better idea. 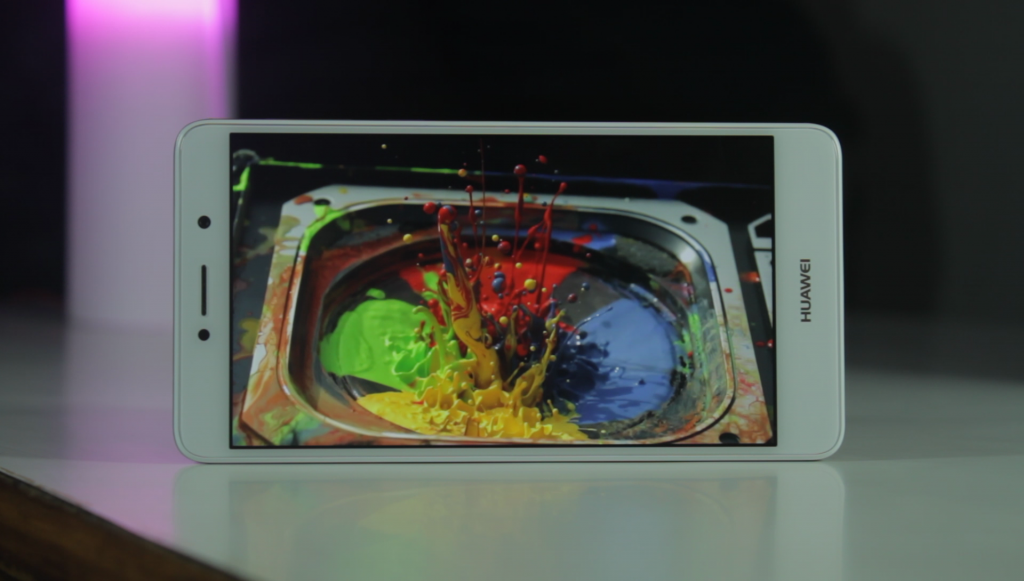 Huawei GR5 2017 comes with a 5.5 inch IPS LCD display that has the resolution of 1920*1080 pixels. This display is a praiseworthy one with good color reproduction and great viewing angles. Talking about the display, what I like the most is the option to customize the white balance. The white can be made warmer or cooler as per one’s preference. Plus, for those who are into using their phones at the night by filtering the blue color, there’s an option for that too.

On the software side, the phone boots on Android 6.0 Marshmallow with Huawei’s own EMUI 4.1 layered on top. For those coming from stock-like android UI, this UI might feel a little alien. For instance, while scrolling from the status bar notifications come out first and to reach quick settings you’ve to swipe from the right. But once you get used to it, you’ll certainly make the best out of it. Personally, I prefer stock-like android experience as opposed to a heavily skinned UI without an app drawer.

Under the hood, the phone is powered by Huawei’s own HiSilicon Kirin 655 octa-core processor with Mali T830-MP2, the first four cores are clocked at 2.1GHz and the remaining four are clocked at 1.7 GHz. This hardware configuration seems to be a perfect match with 3GB LPDDR3 RAM giving an outstanding performance. The gaming performance is satisfactory but the phone heats up a bit while gaming. But that is something common in many phones these days. Multitasking is great but I wish if the app tiles were organized in vertical ordering than the horizontal one. On the storage side, it has the built-in memory of 32GB that can be expanded up to 128GB via microSD card but that will use the SIM2 slot.

On the front, there’s a 8 Megapixels camera which does a decent job of taking selfies and video calling. There’s this beauty mode for selfies that can be scaled from 1 to 10 but works the best at the level of 5. On the back, there’s a set of two lenses of 12 Megapixels and 2 Megapixels placed vertically which are the charm of this device.

This dual camera setup aids in faster focus and gives nice bokeh effect to the portraits. At times, yes the bokeh effect wasn’t as perfect and seemed a little artificial. But I should agree that with dual cameras there was some noticeable depth in the photos. If you have a time and tripod, you can get artistic with its camera using modes like tail lights, light graffiti, silky water, star track that can be found under light painting mode. One can make a lot out of this camera phone that has multiple camera modes including pro mode for both photos and videos.

Personally, I found pro mode for videos to be really impressive. Not many phones have manual options for videos. Those who are into Vlogging from their phone camera might find this feature really handy. Videos can be taken at the highest resolution of [email protected]

The phone houses a 3340mAh battery that will even suffice the needs of hardcore users. The battery performance is remarkably good and can be optimized for much longer usage as well. Plus, it even supports the quick charge. Huawei claims the phone can easily get up to 2 days of battery life mark in normal usages. Honestly speaking, the unit I reviewed didn’t last for 2 whole days but I was able to get around 1 and half days from this phone on my regular usage before the battery died. Additionally, battery drained a little faster when I left my 4G on all day. With 4G always on I made through a day with this phone at its best.

Huawei GR5 2017 is all in all the best camera phone that one can buy under 30K. But, it doesn’t boast a unique or innovative design. Specs-wise, it doesn’t surpass other phones of the similar price range but comes neck and neck. If I were to choose between Samsung Galaxy J7 prime and this phone, I would certainly go with Huawei GR5 2017 without any second thoughts. But if you happen to be a power user, you might want to go with Xiaomi Redmi Note 3 but if you want a phone that is all-rounder then GR5 2017 is the right phone for you. In nutshell, Huawei GR5 2017 is an appreciable upgrade to its predecessor with a faster chip, bigger RAM, greater storage, better cameras and upgraded battery.