Genxt, the sole authorized distributor of Apple products in Nepal, has slashed the price of iPhone 12 Pro Max. Here, I’ll be discussing the iPhone 12 Pro Max and its features, specs, latest price, and availability in Nepal, and more.

More importantly, all new iPhones this year follow the design principle of the decade-old iPhone 4; with a flat-edge on the side. Still, the display has a rounded corner and curved edges like previous iPhones.

Yet, the rumors regarding a smaller notch didn’t turn out to be true. The iPhone 12 Pro Max’s “bathtub” notch is similar in size to the iPhone 11 series. Moreover, it is also IP68 rated against splash, water, and dust. According to Apple, it can survive submersion up to 6 meters of water for a maximum of 30 minutes.

In terms of display, the iPhone 12 Pro Max is for those who want a large screen. Its 6.7-inches OLED panel is the biggest screen in the entire history of iPhones. Compared to 12 Pro’s 6.1-inches panel, the Pro Max’s screen has a higher 2778 x 1284 pixel count with a 458 PPI. Besides the size & pixel density, both screens have the same display properties. 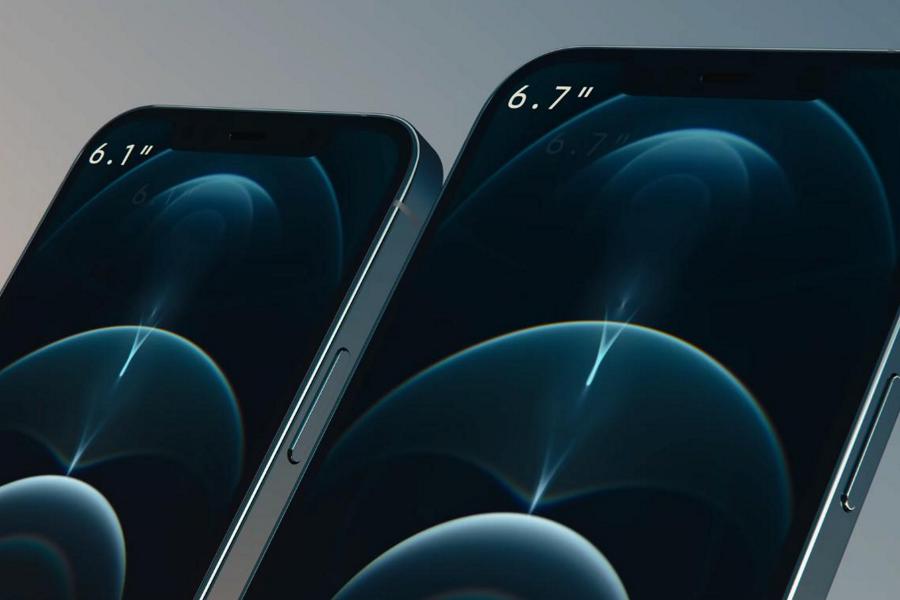 Moreover, it is also Dolby Vision, HDR, and Wide Color (P3) compliant, making the iPhone 12 Pro Max’s display one of the most visually stunning ones in the market – at least on paper.

Interestingly, Apple has worked with Corning to come up with “Ceramic Shield” for tougher protection against drops. By introducing nano-ceramic crystals in the glass matrix which form interlocked structures, Apple is claiming up to 4x better drop performance.

Sadly, Apple customers are gonna have to wait a little longer to find a high refresh rate display. The iPhone 12 series is still stuck on 60Hz.

“Our fastest iPhone yet” has been a consistent talking point on every iPhone launch event ever. But this time around, that claim is taken a step further with the support for the latest 5G connectivity.

Using custom made 5G antennas and radio equipment, Apple says the iPhone 12 series supports the widest range of 5G bands among any other smartphone in the market. As we know, there are two spectrums of 5G: sub-6GHz and mmWave. For now, the faster mmWave 5G is only available in the US.

In fact, 5G was one of the most talked-about features during the entire product showcase event. With mmWave 5G, the iPhone 12 Pro Max can reach peak upload and download speeds of up to 200 Mbps and 4Gbps in ideal conditions, respectively.

But considering the use case, its “Smart Data Mode” will automatically scale down to 4G LTE connection when 5G isn’t needed – and immediately switches back to 5G, once you need a faster network. This battery-saving feature analyzes network requirements in real-time.

Besides 5G, the new A14 Bionic silicon based on the 5nm process node is ridiculously fast as well. This is also the first commercially available mobile SoC based on the efficient 5nm process. We saw this SoC make its debut on the iPad Air 2020 which was unveiled around a month ago. It packs in 11.8 billion transistors, which is about 40% more than its predecessor.

Apple’s silicons have always been the industry leaders and if the company’s claims about the A14 Bionic are to be believed, the next-gen flagship SoCs powering Android phones have a big competition ahead. 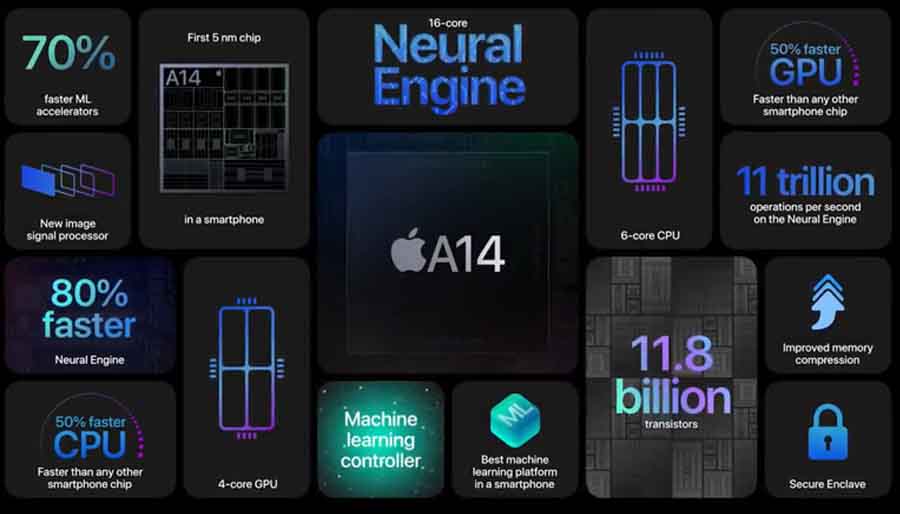 To put it in perspective, Apple is claiming a 50% faster CPU & GPU performance compared to any other smartphone chip. It has a hexa-core CPU setup with 2 high-performance and 4 high-efficiency cores, and a quad-core GPU with improved memory compression.

Moreover, the 16-core Neural Engine provides up to 80% faster operations. The dedicated ML (Machine Learning) accelerators on the A14 Bionic with its 2nd-gen architecture is now 70% faster.

Likewise, its new ISP (Image Signal Processor) allows for Dolby Vision recording, but more on that later on. Amidst the Apple-Epic debacle, Riot Game’s “League of Legends: Wild Rift” will also be coming to the iPhone 12 series.

But, the company hasn’t disclosed the exact date for now. Excitingly enough, Apple has bumped the base storage variant to 128GB from 64GB. You can also choose between 256GB and 512GB memory options.

Getting to the cameras, the iPhone 12 Pro Max, as expected features the best sensors ever put on an iPhone. It has a trio of 12MP lenses at the back; alongside a LiDAR sensor. It has a 7-element 12MP primary wide camera with f/1.6 aperture, 26mm focal length. While the 12 Pro features a 12MP primary wide camera as well, the one on the Pro Max has a 47% bigger 1.7μm sensor.

What this means is that this lens is much more capable of letting-in light (87% more as per Apple’s claims), for superior low-light photography. Also, it uses a DSLR-like “Sensor-shift” OIS technology for image stabilization. 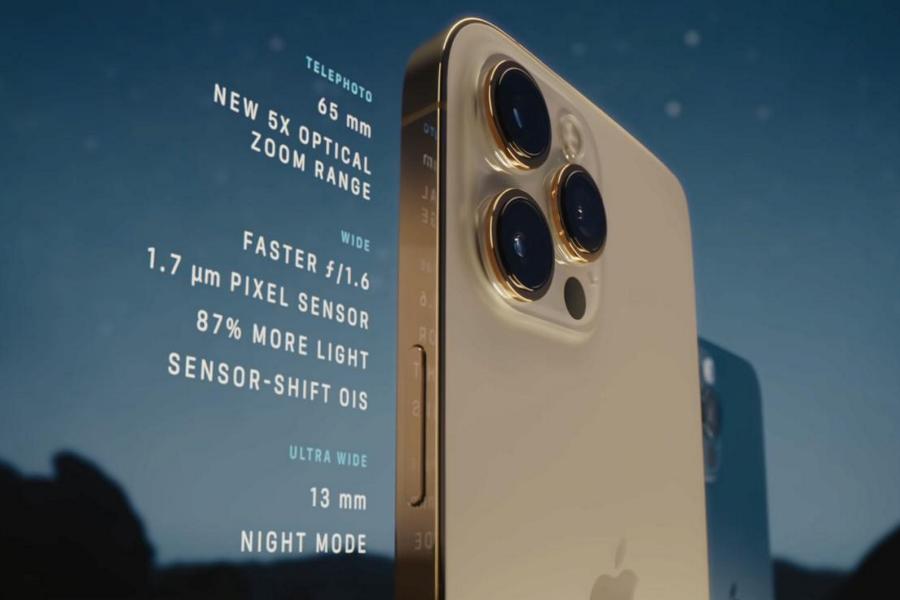 Then there’s the 5-element 12MP f/2.4 aperture ultra-wide camera with 13mm focal length and 120-degree field of view—the same as in 12 Pro. The final 6-element 12MP lens is a telephoto camera that is slightly superior to the one on 12 Pro.

It has an f/2.2 aperture, 65mm focal length, and is capable of 2.5x optical zoom in and 2x optical zoom out (total 5x optical zoom range). Here, both the primary wide and telephoto lens support (OIS) Optical Image Stabilization.

Similarly, iPhone 12 Pro Max also comes with the LiDAR scanner, which is absent on the regular iPhone 12 & 12 Mini. It eases your AR workload while also improving low-light photography and videography.

Paired with A14 Bionic’s Neural Engine, Apple claims that the iPhone 12 Pro Max can deliver the best night mode portrait images. The iPhone 12 series is also the first-and-only smartphone in the market that can record 10-bit Dolby Vision HDR videos at 4K/60fps.

Users can also edit the HDR recordings from the “Photos” app itself – another first for a smartphone. 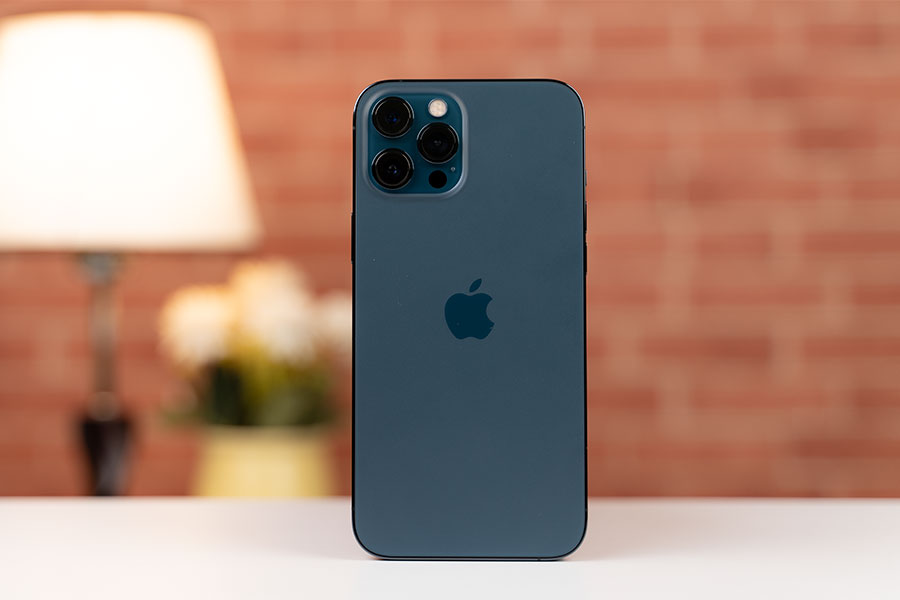 Dolby Vision recording is also possible on the 12MP f/2.2 front-facing TrueDepth camera, but only up to 4K/30fps. Other camera features on the iPhone 12 Pro Max include 87% improvement in low-light photos (compared to iPhone 11 Pro Max) and computational photography niceties like Smart HDR 3, Deep Fusion, etc.

Also exclusive to the 12 Pro series is “Apple ProRAW” from all four lenses. This feature is especially alluring to professionals who seek more creative controls in their shots. Apple says this feature will be available on iPhone 12 Pro and Pro Max starting later this year.

The entire iPhone 12 lineup ships with the latest iOS 14 out-of-the-box. In terms of battery, as usual, Apple hasn’t disclosed the actual capacity of the Li-Ion cell on the iPhone 12 Pro Max. Rather, it says the phone should last up to 20 hours of continuous video playback. But, a TENAA listing has confirmed that the 12 Pro Max comes with a 3687mAh battery. 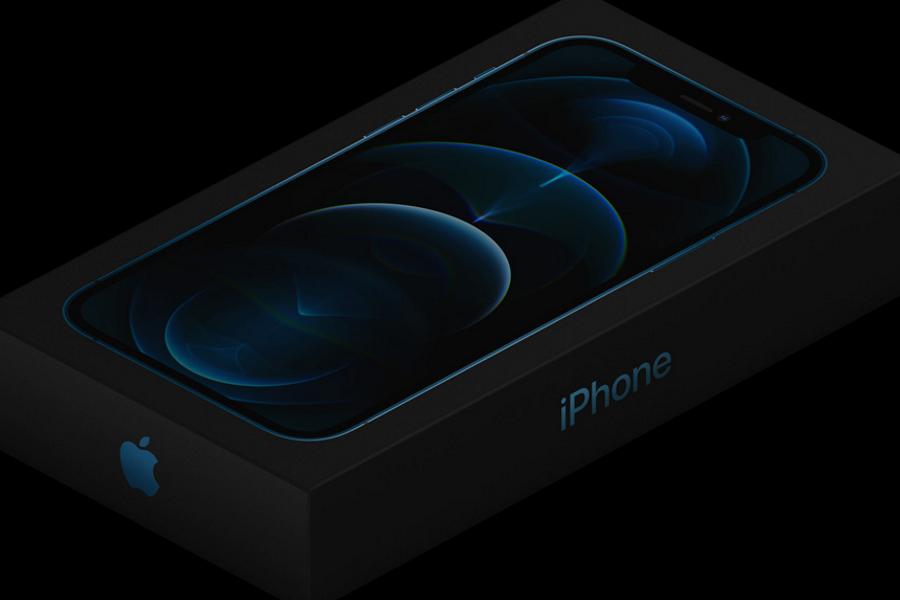 It also features a “MagSafe” wireless charger and a whole lot of magnetically-attaching accessories including a wallet. It supports 15W MagSafe and 7.5W Qi wireless charging.

Unfortunately, Apple is still sticking with the Lightning connector for this generation of iPhones. Using a 20W charger, it can juice up 50% battery in just 30 minutes.

In a bid to bring the manufacturing cost down to keep the prices consistent (and to reduce carbon emission), Apple won’t be shipping the iPhone 12 series with an earphone, and a charging adapter inside the box.

Still, you will be getting a USB Type-C to the Lightning cable inside the box. Even though the price of the iPhone 12 Pro Max in the US is admirable, buyers in Nepal are still gonna face a heavy price tag.