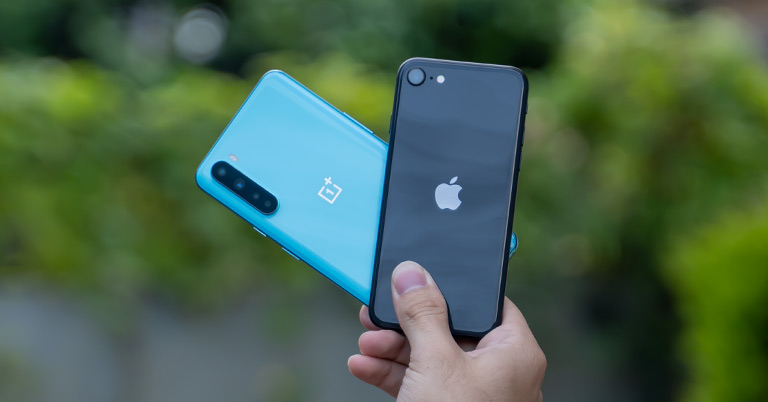 This year has been a little bit interesting for the smartphone world as we finally got to see Apple and OnePlus launching phones in the mid-range category after a long while. And today we have the iPhone SE 2020 and the OnePlus Nord up for comparison. These are probably the best non-flagship phones you can buy right now in the majority of the countries. Yes, I have not included Pixel 4a or the Redmi K30 Ultra…well because they aren’t as widely available as the two phones I have with me.

And while the OnePlus Nord and the iPhone SE 2020 are priced similarly in the European market, the price difference between these phones is quite high in the Asian market. But you know what? iPhones have always been pricier than its Android counterparts in this part of the world and frankly, I don’t know why. Regardless, which one should you pick, and which one would I recommend? Let’s do a detailed comparison in this video and find out.

Design-wise, these are completely different devices. OnePlus Nord has a more modern approach to its looks while the iPhone SE 2 is basically your old school iPhone 8, with different internals, of course. So, if you are someone who is into compact devices, the iPhone SE is a breath of fresh air in this world filled with large phones. It’s handy, comfortable for one-hand usage, and it fits snugly inside your pocket. 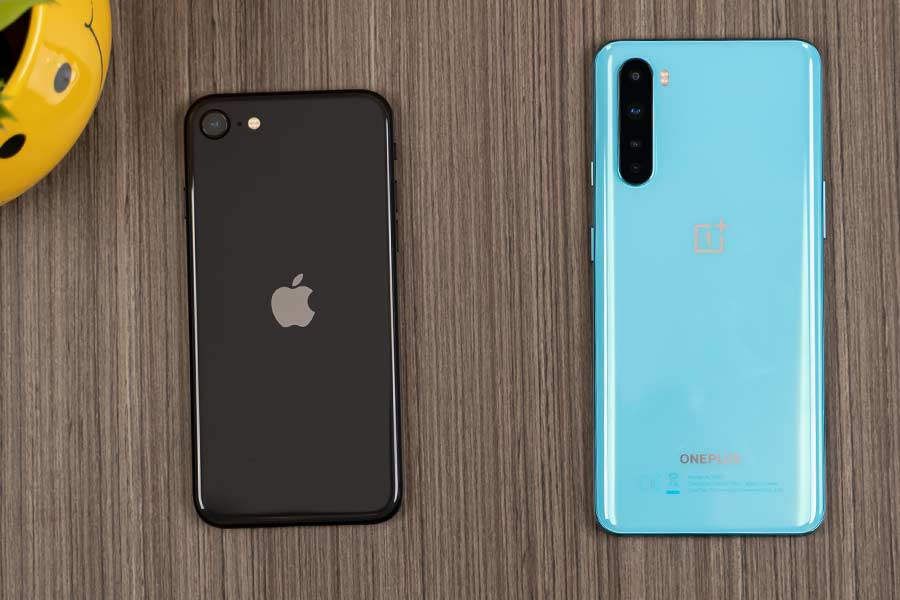 On the other hand, OnePlus Nord looks much more trendy and modern. Although it does not fit well for one-hand usage, the device does have good ergonomics in its favor. Additionally, the Nord gives you an in-display fingerprint sensor as opposed to the physical Touch ID on the iPhone SE 2020.

Being an iPhone 7 user in the past myself, I know how physical buttons are subject to damage over time. So, OnePlus’ implementation is certainly better among the two. Also, the minimal bezels, the tiny punch hole all add to the niceties of the Nord’s design.

Yes, you do get some perks in the iPhone SE’s design like an IP67 rating as compared to the splash resistance on the OnePlus Nord, but that, in no way covers up for its dated design and not so appealing aesthetics.

So, if you ask me to choose between one of these designs, well, it’s the OnePlus Nord!

On the display front too, you’re obviously going to get a lot more on the OnePlus Nord. I mean, it gives you a big AMOLED panel with a 90Hz refresh rate meaning you not only get to enjoy deeper blacks and vibrant colors but it offers you a smoother viewing, gameplay experience as well. 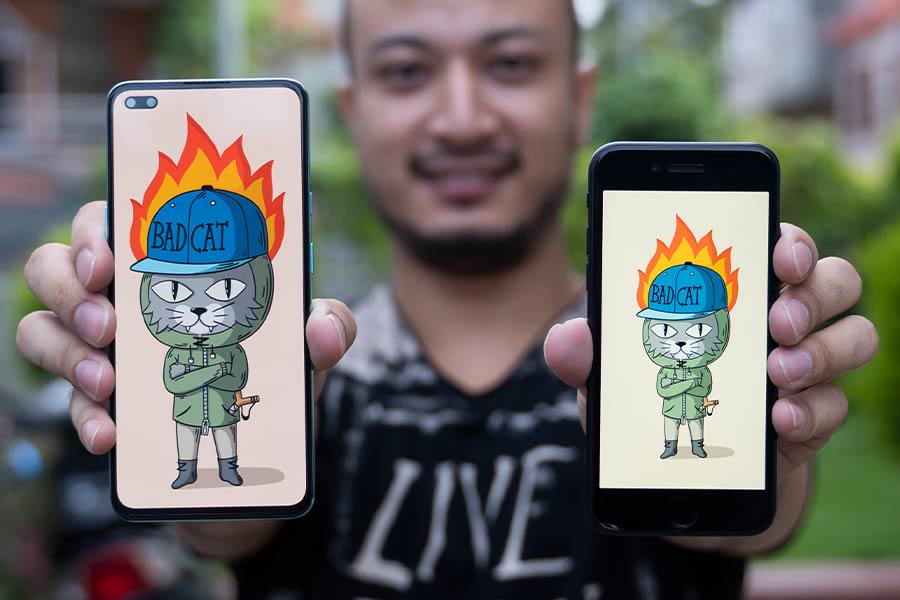 iPhone SE on the other hand offers an HD retina display with a much older 16:9 aspect ratio. And although its quality is decent, the display is too small and the bezels are too thick for it to be crowned as the winner in this aspect. So, this round goes to the OnePlus Nord as well.

Well, OnePlus Nord might take the cake for having the better design and display, but where the iPhone SE does holds its ground is unarguably in the performance and software support department.

As we all know by now, the iPhone SE 2020 is powered by Apple’s latest A13 Bionic chipset which is one of the fastest chipsets around – and not just in the Apple ecosystem. OnePlus Nord comes with the Snapdragon 765G & although I have the 12GB RAM variant, it struggles to keep up with the A13 in practically every aspect of performance like app opening, multitasking, gaming, etc. I ran multiple speed tests on these devices with apps that I use regularly and unsurprisingly found the iPhone SE completing it faster every time. Even when it comes to gaming, the iPhone SE does better. For instance, I can play PUBG Mobile in HDR graphics and Extreme frame rates without much lags, while the OnePlus Nord maxes out at HD graphics and High frame rates. Yes, the 90Hz refresh rate makes the gameplay a little better on the Nord but this, in no way, can compensate for the higher frame rates and better graphics that we can get on the iPhone SE 2020.

So, with its top-of-the-line performance, the iPhone SE 2020 wins this round.

Not to forget, this incredible performance is backed by iOS 13 whose app optimizations and back end support is just amazing. All of my most used apps like Instagram, YouTube Studio, Pages Manager, etc. run better on iOS devices.

Also, you get a well-stocked App Store in iOS with a wide selection of premium apps. Add to that the fact that the iPhone SE is going to receive updates for much longer than the Nord, the second-gen iPhone SE appeals to all those looking for years of software updates. Yes, OxygenOS is one of the best skins for Android but in comparison to iOS, it is still not up there.

So, the iPhone SE is the undisputed winner in the software department as well.

Since I have been using these devices for a long time now, I have had the opportunity to test them quite extensively. Spec-wise, you get 2 cameras on the iPhone SE 2020, a 12MP back camera, and a 7MP camera at the front while the OnePlus Nord has a total of 6 cameras, a 48MP primary camera, an 8MP ultra-wide lens, a 5MP depth sensor, and a 2MP macro lens. There are two cameras up front consisting of a 32MP primary sensor and 8MP ultra-wide- lens.

Quick info, I will divide this comparison between the rear camera, front camera, and videos! 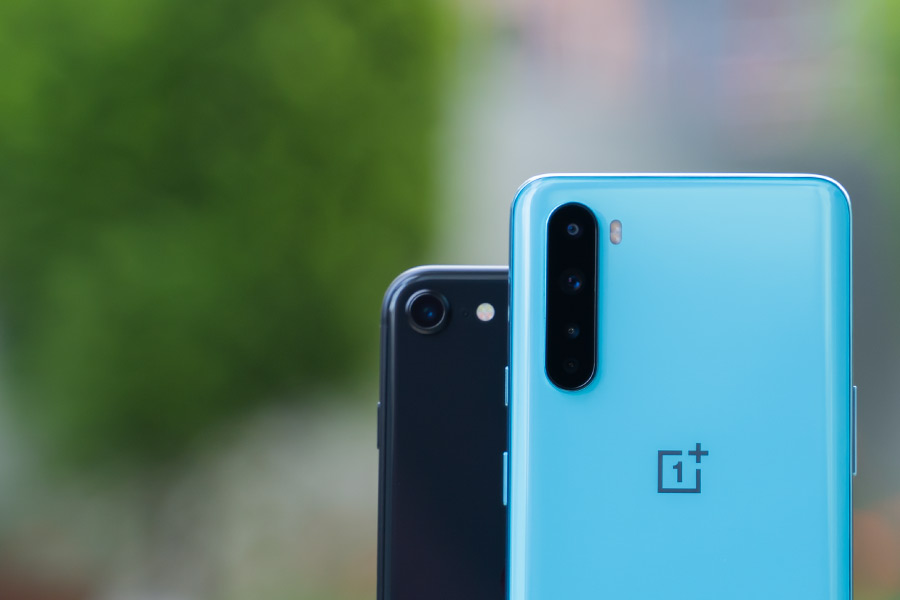 In terms of the primary camera, both phones do a pretty good job. iPhone SE produces warmer colors while the Nord has a cool tone in its images. The dynamic range works a little better on the iPhone SE though and sometimes its images are little on the saturated side. Despite this, I like the images from both cameras.

However, something that the iPhone SE does so much better is that its autofocus works wonderfully well and you will notice no shutter lag which of course is a perk of the well-optimized iOS.

Moving on, software-side portraits on the iPhone SE are on par with those from the 5MP depth sensor on the OnePlus Nord.

It’s just that the subjects appear a little dark on the SE as compared to Nord. Otherwise, both phones do a well enough job in portraits.

Talking of nighttime images, OnePlus Nord does slightly better in terms of details. But overall, the normal night time images are similar on both phones.

However, the iPhone SE does not have a dedicated night mode while the Nightscape feature on the Nord helps balance exposure and details by a great deal. So, that’s a plus for the Nord!

Also, we cannot miss out on the fact that the OnePlus Nord gives an ultra-wide-angle lens and a macro lens too which makes its rear cameras more versatile than the single-camera setup on the iPhone SE.

So, although both phones’ primary cameras do a similar job, it’s only fair to declare the Nord as the winner of this round. 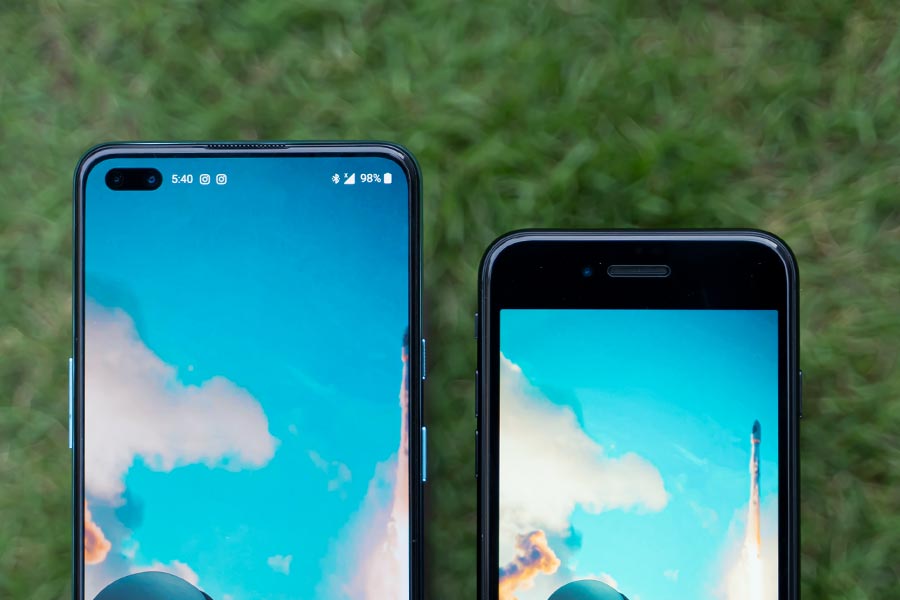 About the front cameras, I prefer the images from the OnePlus Nord in terms of skin color. iPhone SE applies a really unnatural brown-ish tint which makes you look a little weird.

Plus, the Nord gives you an extra wide-angle lens up front too. So, OnePlus Nord snatches victory in the selfie battle too.

Despite OnePlus’ dominance in the image department, I would give the iPhone SE the crown when it comes to videos. Here, you can get well stabilized and good quality videos in 4k 60 fps while the highest you can go on the Nord is 4k @30 fps.

Now, let’s get to connectivity. The iPhone SE supports the newer WiFi 6 while the OnePlus Nord does not have that. Yet, the Nord with its 5G connectivity, Dual-SIM compatibility, Bluetooth 5.1, and support for some high-end audio codec (aptX HD), all of which the iPhone SE 2020 lacks, wins this round.

Audio-wise, in a typical 2020 fashion, you don’t get a headphone jack on both phones. Likewise, iPhone SE has a stereo speaker while the OnePlus Nord only has a single firing speaker at the bottom. Overall, the iPhone SE has better audio clarity and frequency response. Also, the iPhone SE has a better vibration motor compared to the significantly weaker motors on the OnePlus Nord.

Time to talk about the batteries. And like I said in the long term review of the iPhone SE, it has one of the worst endurance among any other upper mid-range phone in 2020. The worst part is that you don’t even get a fast charger inside its box. On the other hand, OnePlus Nord has a much bigger battery, better endurance and the company provides the 30W fast charger inside the box. You sure don’t get the wireless charging feature on the Nord like the iPhone SE 2, but I am sure one won’t miss such a flagship feature on an upper mid-range phone.

So, without any doubt, OnePlus Nord absolutely thrashes the iPhone SE in the battery department.

The conclusion here is pretty clear. OnePlus Nord is victorious in more aspects while the iPhone SE sweeps victory mainly in the performance and software department. But then again, it all boils down to the ever-lasting Android-iOS debate.

No Android phone in this price range can provide you iPhone SE-level performance and years of software support. However, it is also true that the unrivaled performance comes at a cost of feature omissions like a better display and bigger battery, etc.

Overall, I think the OnePlus Nord is a much better value for the money than the iPhone SE 2020, at least in South Asia. If only Apple had made a few changes in the iPhone SE rather than just repackaging the iPhone 8 with A13 Bionic chipset, this comparison would have turned out to be very different. So, unless you strictly want an iPhone, getting the OnePlus Nord, that too for a cheaper price, would be the wiser investment.