Apple announced the latest iPhone SE during its “Peek Performance” event last month. The phone is now officially available in Nepal. So, let’s get into the specifications, availability, and official price of the iPhone SE (2022) in Nepal.

As of now only the 128GB variant of the iPhone SE (2022) is officially available in Nepal, whose market price is Rs. 87,000. You can buy the new iPhone SE 2022 from authorized stores like Hukut in Nepal.

The major upgrade in this year’s iPhone SE (2022) is the A15 Bionic chip. This is the same chipset used in the latest iPhone 13 series. The silicon includes a 6-core CPU with two performance cores and four efficiency cores, as well as a 4-core GPU. In addition, the SoC has a 16-core Neural Engine capable of 15.8 trillion operations per second (TOPS). On the software front, iPhone SE (2022) boots on the latest iOS 15. The storage option includes 64GB, 128GB, and 256GB. Moreover, the smartphone gains 5G connectivity; however, it does not support 5G mmWave bands. Instead, the new iPhone utilizes a sub-6 GHz band.

Similarly, the company has not disclosed the actual battery capacity of the phone. Yet, Apple claims that it can deliver up to 15 hours of video playback time, and up to 50 hours of audio playback. It charges via a 20W adapter which takes around 30 minutes to juice up the device to 50%. As is usual with Apple, the compatible adapter is sold separately.

Design-wise, iPhone SE (2022) retains the same design as its predecessor. As a result, you get eyesore bezels on the top and bottom of the smartphone. Similarly, it still has a home button with Touch ID support. 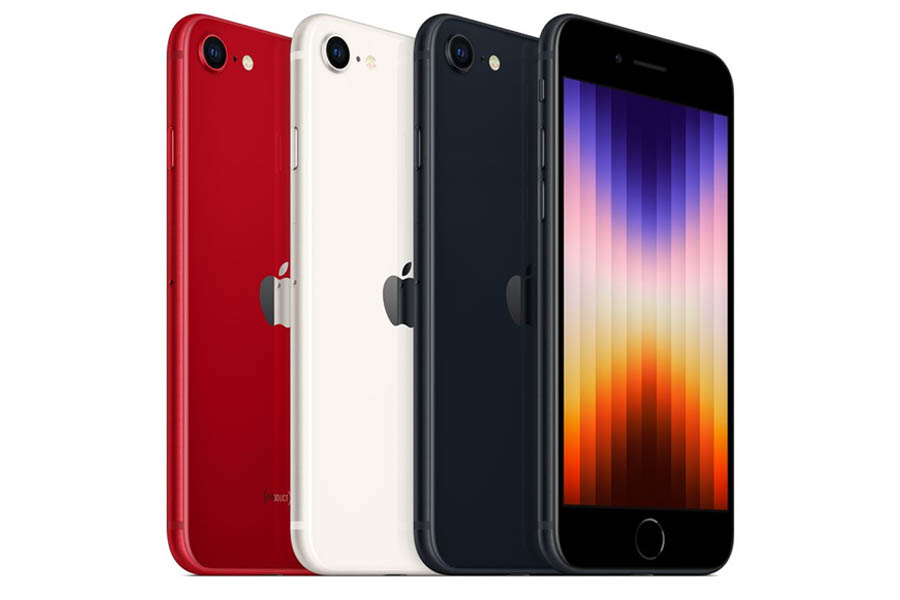 The device’s rear and the front are covered by glass, which Apple claims is “the toughest glass on a smartphone.” However, Apple hasn’t clearly said whether or if it’s their proprietary “Ceramic Shield” glass. Anyways, it also has IP67 certification against water and dust resistance. The iPhone SE (2022) comes in three colors: Midnight, Starlight, and (Product) Red.

On the front, there’s a 4.7-inch LCD screen, which is the same as the one seen on the SE 2020 and iPhone 8. The display boasts a fingerprint-resistant oleophobic coating, a resolution of 1334 x 750 pixels, and a peak brightness of 625 nits.