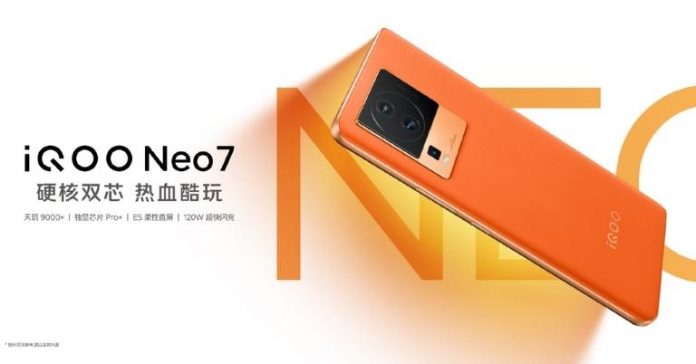 Just six months after the release of the Neo 6, iQOO introduced its successor, the Neo 7. It’s a mid-range phone with generational upgrades here and there. Here, we’ll take a closer look at the iQOO Neo 7, as well as its expected price in Nepal.

Visually, the Neo 7 is very similar to the Neo 6. The rectangular camera module remains on the back, with a punch-hole cutout display on the front. However, iQOO managed to squeeze in a larger 6.78-inch screen, up from the 6.62-inch of its predecessor. It’s also a Samsung-made E5 panel with a refresh rate of 120Hz, Full HD+ resolution, and HDR10+ certification. Furthermore, with a brightness of 1500nits, the smartphone can get enough bright outside. You get an in-display fingerprint scanner for biometrics. The iQOO Neo 7 is available in three colors: Pop Orange, Impression Blue, and Geometric Black.

Under the hood, the iQOO Neo 7 packs the flagship Dimensity 9000+ chipset. Based on TSMC’s 4nm fabrication process, this octa-core processor has a Cortex-X2 core clocked at 3.2GHz, three Cortex-A710 at 2.85GHz, and four Cortex-A510 efficiency cores. Graphics are handled by the Arm Mali-G710 MC10 GPU. In addition to the Dimensity 9000 Plus, the iQOO Neo 7 has a display-supporting chip. The chip, dubbed ‘Pro+,’ helps reduce power consumption for a better gaming experience and more stable framerates. The phone also has a 4013mm2 VC cooling system to help the Dimensity processor run at peak performance.

Memory-wise, it comes with up to 12GB of LPDDR5 RAM and up to 512GB of 3.1 storage. And the phone boots on OriginOS Ocean based on Android 13.

Moreover, the iQOO Neo 7 has three rear cameras headlined by a 50MP main sensor with OIS support. Along with it come an 8MP ultra-wide-angle lens, and a 2MP macro sensor. There is a front-facing 16MP selfie camera.

Aside from that, the Neo 7 comes with a 5000mAh battery that can be charged with a 120W USB-C charger. Stereo speakers handle the audio.