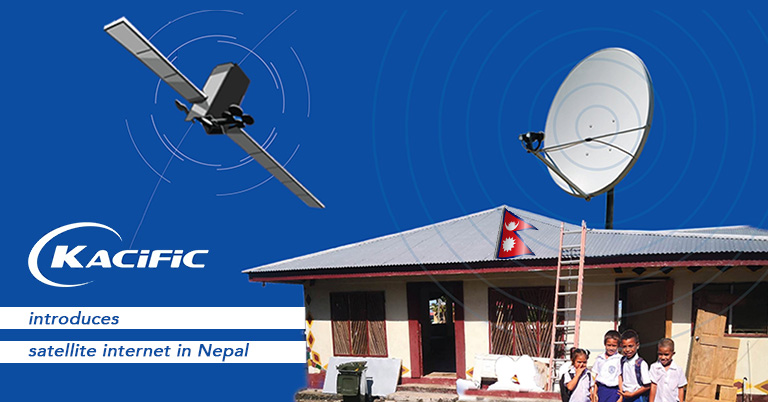 Yes, you read that right. Satellite internet is finally here in Nepal. And no, it was not Elon Musk’s Starlink to bring broadband satellite internet to the country. Although looking at its latest coverage map, the company does expect to enter the Himalayan country by 2023. Anyway, Everest Link has launched satellite internet service in Nepal in partnership with Space Link and Singapore’s Kacific Satellites.

What is satellite internet?

Unlike your typical fiber-based or wireless internet, satellite internet is a bit different. Simply put, its entire process starts with an ISP (Internet Service Provider) sending a geostationary satellite into space that orbits the Earth. The satellite is responsible for transmitting signals to and from the end-user and the “Earth Station”.

Here, the Earth station (or ground station, or gateway) is essentially what delivers internet radio signals to the satellite, which it then forwards to the local modem.

And to receive signals sent by the satellite, a receiver dish or a VSAT (Very Small Aperture Terminal) antenna is installed at a location with a clear view of the sky. That’s quite the oversimplification, but I hope you get the idea.

This is mostly ideal for rural or some geologically complex areas where fiber or dial-up internet is inaccessible. That unavailability may be due to the complicated logistics to expand fiber services, unfavorable economies of scale, or some other reasons entirely.

Regardless, the arrival of satellite internet service in Nepal is quite a significant achievement. That’s because now, the digitally underserved communities of the country—especially the Himalayan region—will finally have access to the wonders of the internet.

What is Kacific Satellites?

Kacific Satellites is a global broadband satellite operator that currently serves a total of 25 countries in South East Asia and the Pacific territory through 56 satellite spot beams. It is also the largest Ka-band operator in the said region. The company launched its first Ka-band geostationary high throughput satellite (HTS) in December 2019, called “Kacific1”.

Ka-band (or KA band, or Kₐ band, or K-above) defines frequencies in the range of 26.5 – 40 GHz that are used for satellite communication. Here in Nepal, NTA (Nepal Telecommunications Authority) approved the use of the Ka-band spectrum (19.7 – 21.2 GHz downlink, 29.5 – 31 GHz uplink) for satellite internet in March 2021.

So with the foundation set, Kacific Satellites has been testing on setting up a Ka-band terminal in Nepal for quite some time now. But mind you that an international satellite internet provider can’t directly offer its services to the end-user. According to the existing Nepali regulation, it has to route through an NSP (Network Service Provider) and an ISP (Internet Service Provider).

In this case, Space Link (NSP) acquired the license for the use of the Ka-band spectrum in March of last year. And to offer Kacific’s satellite internet services in Nepal, it has teamed up with Everest Link (ISP) since a licensed NSP isn’t allowed to provide internet services to the end customer either. However, Kacific clarified that other ISP or NSPs could also collaborate with the company to extend its services in Nepal if required.

And in December 2021, the company successfully tested a Ka-band terminal in Nepal where it achieved 80 Mbps download and 16 Mbps upload speed. According to Kacific, it is currently in the final stages of testing and plans to commercially roll out its satellite internet services in July 2022.

Brace yourselves. While satellite internet’s accessibility is no match for fiber-based internet, that does come at a price. Quite literally. Everest Link currently has the following three subscription tiers for its satellite internet services in Nepal:

Note: The aforementioned prices are inclusive of VAT. FUP is applicable to all plans.

On top of this, its one-time installation cost is quite staggering too. The 1.2 meters satellite dish alone costs $678 (which translates to around Rs. 85,000)! By the way, that’s the discounted price. The company mentioned that this rate will only be applicable to a handful of customers on a first-come-first-serve basis. And the original equipment cost for the dish is $1200 (~ Rs. 150,000). Then there’s the charge for the MDM2010 satellite modem, whereas transportation and other tertiary costs are to be incurred by the end customer too.

Likewise, the satellite dish is also non-returnable. That means, in case you’re unsatisfied with the service, you can’t return the dish and get a refund. Kacific did mention that a buyback program of sorts was being discussed internally, but we have no way to tell if and when that program will actually come into action as of now.

So it’s pretty clear that this satellite internet service is out of reach of many Nepali households. Instead, it’s mostly suited for government offices, hospitals, communities, corporations and business houses, and such. Then again, satellite internet (by its very nature) is expensive compared to fiber or dial-up internet. To minimize the cost burden to a certain degree, one can enroll in the Kacific Authorized Distributor (KAD) program.

This is basically a referral program where individuals or businesses can earn up to Rs. 45,000 by signing up a new customer. But their responsibility also includes installing network equipment to the customer’s location and making sure that the customer renews their subscription.