After months of anticipation and speculations, Lenovo finally pulled the curtains off of its first gaming smartphone which has been aptly named the “Legion Phone Duel”. With the ever-surging portable gaming scene in the industry, it was only a matter of time that the company wanted to cash-in on this market. So let’s take a look at what the Lenovo Legion Phone Duel is packing, and its expected price, availability if and when it launches in Nepal.

The essence of “Legion”

First of all, the name. Legion is the company’s long-running lineup of gaming products like PCs, laptops, monitors, etc. Though Lenovo still sells smartphones under its own brand even after the acquisition of Motorola way back in 2014, they’ve not been made with many triumphs. And it’s only logical that they’re borrowing from the success of the “Legion” name to kick off its gaming smartphone venture. After all, other gaming hardware manufacturers like ASUS, Razer found success in this market by doing the same.

But yeah… “Lenovo Legion Phone Duel” definitely doesn’t roll off the tongue and thus is a mouthful at 8 syllables. Interestingly, it goes by a different name in the Chinese market: Lenovo Legion Phone Pro. Naming aside, this smartphone rightfully looks to shake up the whole “gaming-specific smartphone” atmosphere; with its wild design and an insane spec-sheet.

A radical design, even for a gaming smartphone

As we’ve seen throughout the years, gaming phones tend to have a flapper aesthetics with a non-subtle and aggressive look. Because of such design practice only, they’ve managed to confine themselves into a niche group of the market while packing on par (if not better) hardware compared to the general flagship devices. However, the Legion Phone Duel is hoping to take it a step further. Take a look at this thing. Available in either “Vengeance Red” or “Blazing Blue”, each one has a slightly different rear panel. Though both of them have the “Stylish Outside” and “Savage Inside” lasered on either side (that’s also the slogan of Legion brand by the way), the panel itself has a varying aesthetics. The red one has a calmer stripey look whereas the blue color option goes full-on gamer-mode with vertical lines and an arrowhead of sorts converging to the center of the device.

So, why did Lenovo go on to manufacture such contrasting variants of the same device? I think the company has been clever enough to address the past complaints gaming phones, in general, have received on their extreme design language. While it’s not completely what we’d call “normal”, the Vengeance Red alternative at least tries to somewhat blend into the standard smartphone design norm.

Aside from this, the center of the phone holds the programmable multi-color LED underneath the classic Legion “Y” logo. Yup, how can a phone be worthy of the gaming title if it doesn’t feature a glowing component, amirite? On its right is the dual rear-camera setup while the top gets interesting as it features the world’s first side-mounted front-facing camera. Even though pop-up lenses have been around for a while, this sort of implementation is the first of its kind.

What this also goes on to reflect is where Lenovo’s priorities lie. It’s a gaming phone and it is only natural that gamers would like to stream what they’re playing as well. And the side-facing front camera is the perfect position for this (though its housing is a little wide for holding a single lens). 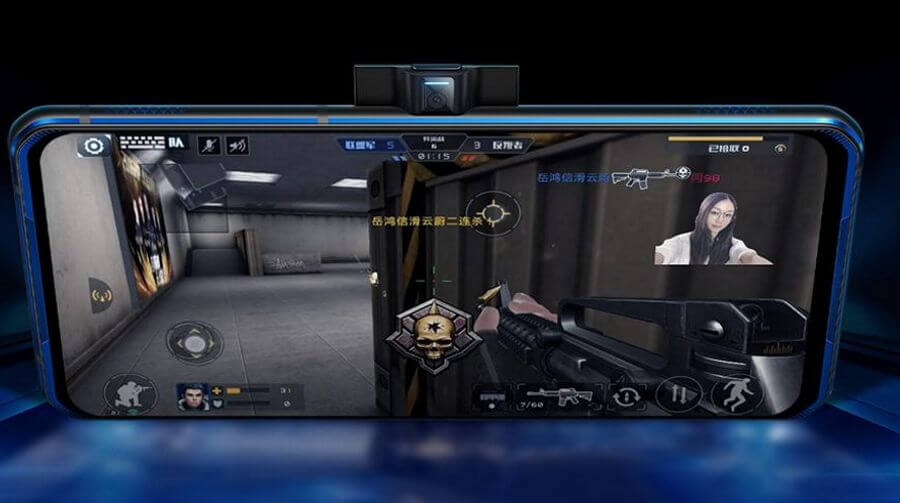 The motor looks quite sturdy too; at least on the paper. According to the company, this 20MP motorized camera has a life of 400,000 pop-ups which is about 100 pop-ups every day for a little under 11 years. Furthermore, the motor retracts in just half a second to protect against any damage in case of any fall.

Coming to the front, the display is treated with minimal bezels on all four sides but more importantly, you are getting dual front-firing stereo speakers tuned by Dirac Audio. They’re wide enough to be immune to complete blockage from the user’s hand but Lenovo has ensured a terrific audio experience with a “90° holographic sound field phase” using Audio MIMO technology. The appeal of high refresh rate displays on smartphones has been borrowed from desktops and laptops. And at this point are pretty much a necessity on a 2020 phone. While 90Hz or 120Hz remains the dominant standard on phones available right now, they’ve already been met with a successor in the form of 144Hz. The Legion Phone Duel brags the very same technology; although it’s not the first to do so as there are already a couple of 144Hz smartphones. Like the iQOO Neo3 5G, iQOO Z1, Nubia Red Magic 5G, etc.

What a high refresh rate does is result in the smoother viewing experience and reduced latency as the pixels on the screen are being refreshed more often than they do on a standard 60Hz panel. And there are already quite many games that support 144Hz like Vainglory, Injustice 2, Oddmar, etc.

But for a gaming phone, the touch sampling rate is equally important. It basically refers to how fast the display can scan and register your touch input. Therefore, the Legion Phone Duel comes with an impressive 240Hz touch sampling rate though it is overshadowed by the new ASUS ROG Phone III with its 270Hz or upcoming Nubia Red Magic 5S’ 320Hz. 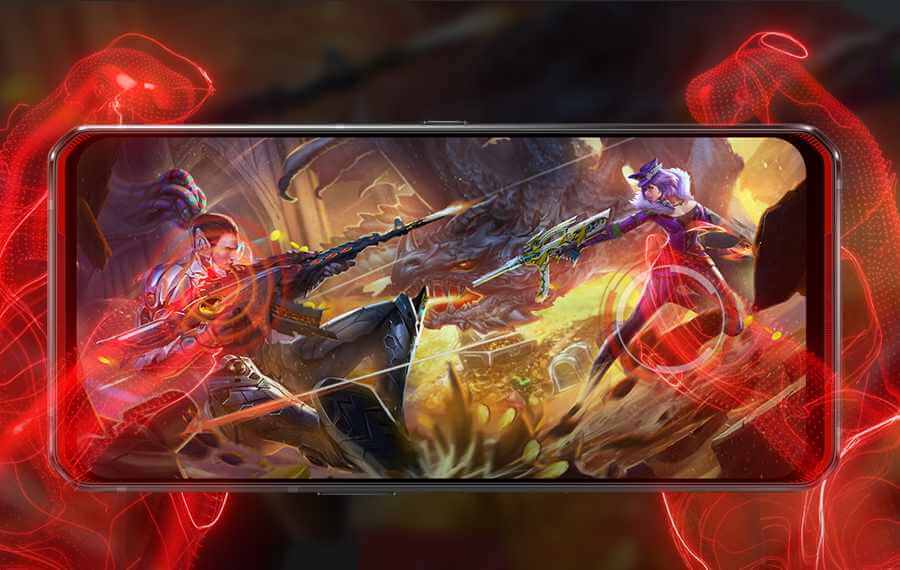 It also has dual ultrasonic trigger buttons. These can be customized to launch various in-game actions to ease the gaming experience. Likewise, it comes with a dual X-axis linear vibration motor called “U-Engine” and 3D motion sensors that offer immersive haptic feedback, especially when gaming.

And the display panel itself is amazing too. The phone has a big 6.65-inches AMOLED display with wide DCI-P3 color coverage, in-display fingerprint scanner, and is TÜV eye-protection certified. Corning’s latest Gorilla Glass 6 protects both the front and the back of the device.

We’d be only fooling ourselves if we expected anything less than top-notch in the performance department. Lenovo is packing all the greatest hardware inside the Legion Phone Duel. You get the latest Snapdragon 865 Plus, up to 16GB of LPDDR5 RAM, and 512GB of UFS 3.1 storage. Based on the same 7nm process node, the 865 Plus is an overclocked version of the standard 865.

Even though this chipset supports both sub-6GHz & mmWave 5G, Lenovo says this device won’t support the faster mmWave spectrum which is honestly a bummer to buyers where this technology is readily available. Having said that, it can achieve up to 2.52GB/s of download speeds in NSA mode and 2.12Gbps in SA mode, which is pretty good. The phone also supports WiFi 6 (ax) for a low-latency connection. Talking about benchmarks, Lenovo says the Legion Phone Duel managed to score a whopping 648,871 on AnTuTu v8 from the 16/512GB model. 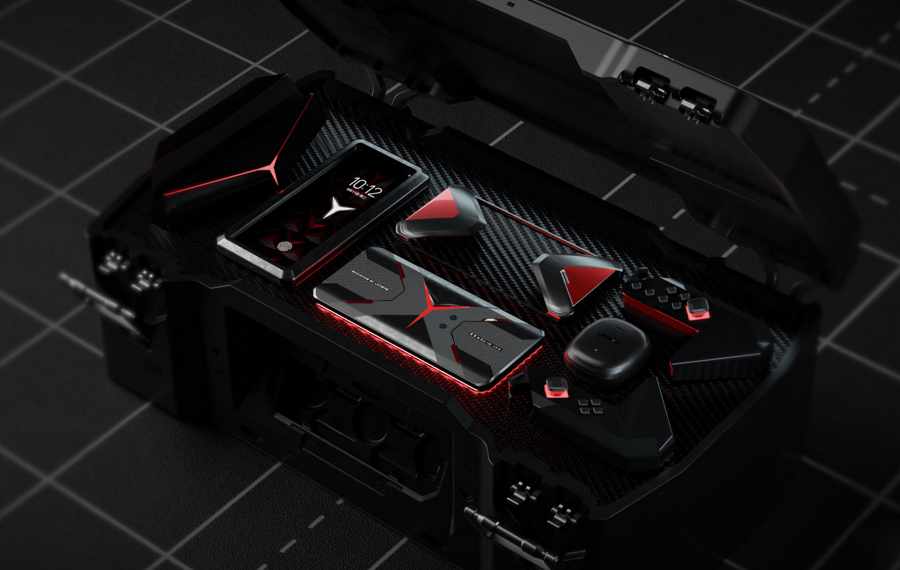 Lenovo has added in a handy record that lets you quickly record, view, and share your gameplay with others. Additionally, users can tweak the hardware performance level under the “Lenovo Legion Realm” dashboard for in-depth control of system resources to get superior performance.

Like ASUS, Razer, and Xioami who have launched their gaming smartphones with extra accessories; the Legion Phone Duel also comes with detachable controllers and Legion-branded TWS earphones.

The one thing that Lenovo had promised from the very beginning on its gaming phone was a clever heat dissipation mechanism. It seems the company has delivered on its promise. The Legion Phone Duel features dual liquid-cooling and copper tubes with a large area of 45,767.32mm2. Similarly, its big 5000mAh battery is actually two separate 2500mAh cells that have been placed on either side of the motherboard. 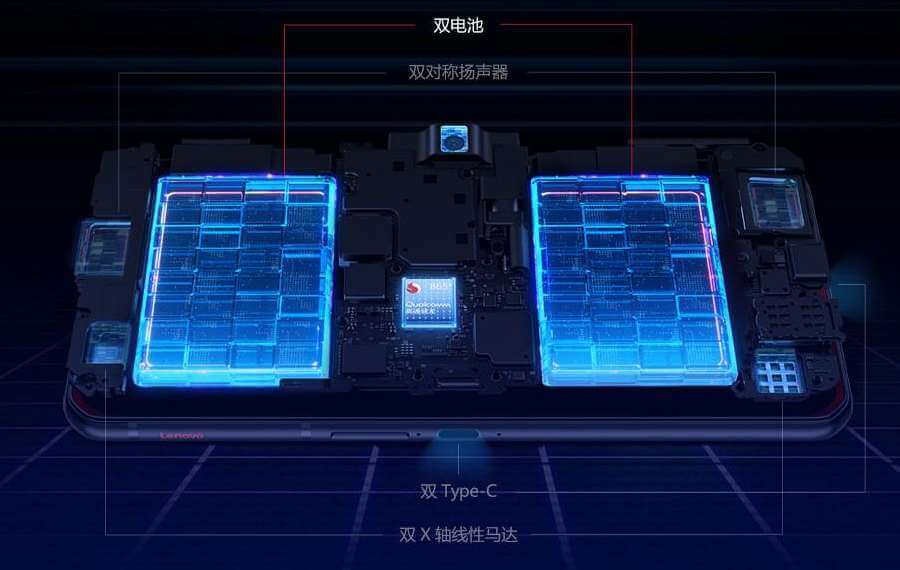 With this, the most heat-generating component of any phone: the chipset, lies in the center of the Legion Phone Duel which is typically unreachable when you’re playing any game in landscape orientation. This is further helped by the fact that this phone is quite huge. So, yeah… I’m impressed. And about that 90W charging, it is important to note that it is possible only when simultaneously connecting two cables; on both charging ports found at the left and the bottom of the phone.

Lenovo calls it “Twin Turbo Power System” but depending upon region, you might get a 65W charger instead. Talking about the charging speed, under 90W, the phone can go from 0 to 50% in 10 minutes and to 100% in 30 minutes.

Decent cameras or no?

Now, gaming phones have never been known for their exceptional photography prowess. And the Legion Phone Duel looks to be no exception either. The dual rear camera setup consists of a 64MP primary lens and a 16MP ultrawide camera with 120° field-of-view. This primary lens is maxed out at 4K/30fps videos; which is a little surprising considering that the 865+ is well capable of handling 8K footages. The 4K recording is true for the 20MP front-facing pop-up camera too.