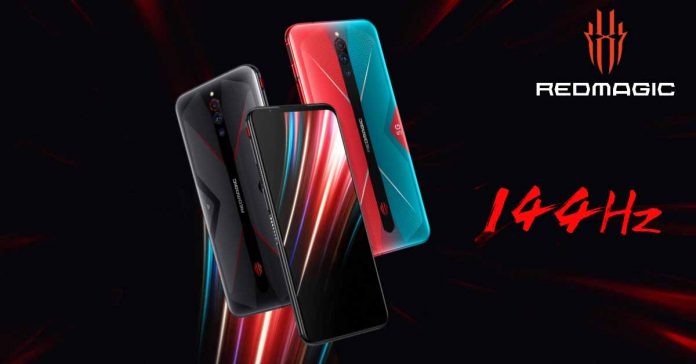 Back in the day, people would laugh at you if you said you were a smartphone gamer. However, with the advancement of smartphone hardware, gaming smartphones are becoming a thing. Though it may not be as popular as console or PC gaming, it is growing at a rapid rate. The gaming smartphone has now caught the attention of the brands that lead the gaming industry such as Razer and Lenovo Legion. This year, we expect a lot of things to happen in the smartphone gaming segment; the start of which seems to be the launch of Nubia Red Magic 5G.

Nubia, which started as a subsidiary brand ZTE, became an independent manufacturer in 2015 following enormous investment from Suning Holding Group and Suning Commerce Group. While it markets the majority of its smartphones as “Mobile Photography Expert“, the Red Magic series is popular among gamers as it brings gaming specs at a reasonable price.

With the new Nubia Red Magic 5G, Nubia is following the recent trends of smartphone brands to announce 5G phones. We have a lot of 5G phones in 2020 – even gaming phones like Black Shark 3 series, and iQOO 3 5G. However, Nubia Red Magic 5G is a different beast altogether with some serious power inside.

Nubia Red Magic 5G comes with a 6.65-inch FullHD+ screen. The AMOLED panel packs in 2340 x 1080 pixels. But what makes headline is the 144Hz refresh rate on the device. You heard it right – even when 90Hz screens on phones are scarce, the device supports a refresh rate of up to 144Hz. The refresh rate is well complemented by the 240Hz response rate. Frankly, what else would you ask if you are a gamer? It is the first among the smartphone to come with the flashy feature. The screen has narrow bezels on the top and the bottom. There is a tiny circular cut out on the top to accommodate the front camera. Under the hood, Nubia Red Magic 5G comes with Qualcomm’s Snapdragon 865 chipset. The chipset has become a standard for all the flagship smartphones set to launch this year. The chipset is coupled with Qualcomm’s Snapdragon X55 modem for 5G connectivity. The base variant comes with an 8GB RAM but you can choose to get up to 16GB of RAM. Talking about internal storage, you can choose from 128GB to 256GB of UFS 3.0 storage. The RAM, here, is based on the latest LPDDR5 technology.

On the back of the device, we have a three-camera sensor arranged vertically on the top of the device. An LED flash resides just above the camera setup. The primary camera, here, is Sony’s IMX 686 sensor. It is accompanied by an 8MP ultra-wide angle sensor and a 2MP macro sensor. On the front, we have an 8MP selfie camera. The camera isn’t the strongest part of the device but it isn’t designed for photographers. The Red Magic 5G comes with improved shoulder trigger buttons. The buttons have a 300Hz response rate and a 3milli-second touch delay for a more console-like experience. The 4,500mAh battery on the device supports 55W fast charging technology. It has an “air-cooled fast charging technology solution” to combat the heat generated from the fast charging. The colling system consists of a fan and a heat-sink chamber and is claimed to reduce the temperature around the CPU by almost 18-degrees.

It ships with Red Magic OS layered on top of Android 10. The phone retains the 3.5mm headphone jack and comes with 6 mics. The device supports 5G connectivity and WiFi-6 standards.

Check out the top gaming laptops under 1 lakh in Nepal

So are you excited about the Nubia Red Magic 5G? Does it miss out on any features you would want on a gaming smartphone? Let us know about what do you expect in gaming smartphones that will hit the market this year.

Check out our long-term review of Poco X2.