Home Chipset MediaTek looks to make smartphone gaming cheaper than ever with its new... 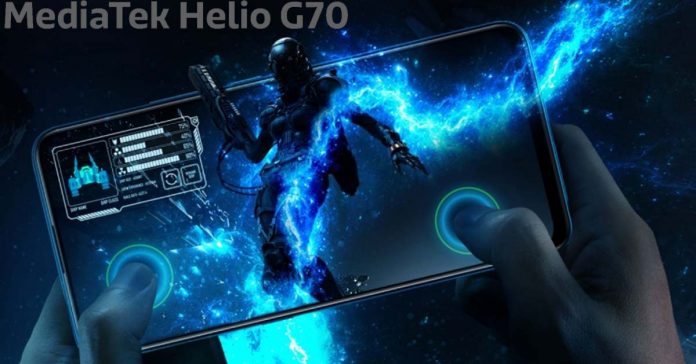 When early rumors of the Xiaomi Redmi 9 hit the internet back in December, it was said to feature an unannounced MediaTek Helio G70. Unheard? Unannounced? Not anymore. MediaTek has finally announced Helio G70 in the Helio G series of gaming chipset. The new Helio G70 chipset will be powering upcoming mid-range gaming smartphones in 2020.

MediaTek came up with the gaming-focused Helio G series of processors last year. Helio G90 and G90T were the first two chips under the new series, while the latter was used in the Xiaomi Redmi Note 8 Pro. It uses the ARM Cortex-A76 as the performance cores and Cortex-A55 (@2Ghz) as efficient cores. Helio G90T is based on the 12nm FinFET process.

Not to forget, Redmi Note 8 Pro was the best performer at its price range.  So what separates the Helio G series from the rest? MediaTek Helio G series comes with Mediatek’s HyperEngine technology. The company claims that different technologies embedded in HyperEngine will enhance the gaming experience through fast connection, optimized response, brilliant picture quality, and intelligent resource management. MediaTek will be focusing on the lower end of the gaming smartphone market with the new Helio G70 series. So, it is fair to say that the Helio G70 will not come possessed with the gaming prowess of the G90T but will try to replicate some of it for the reduced cost.

If we compare it to the specs of Helio G90T, we see that a lot of things have been compromised for the budget segment chipset.

MediaTek also announced Helio G70T, but it’s not clear exactly how it’s different from the regular G70. We can expect higher frequency CPU/GPU in the G70T, plus other notable enhancements. Both these chipsets will debut in early 2020.

Check out our review of the Xiaomi Redmi Note 8 Pro:

How excited are you about the new gaming chipset from MediaTek? Do you think it can take on the Qualcomm’s Snapdragon 765G? Let us know your views.