Earlier, a report from TechnikNews suggested Motorola will be changing the naming convention of its G-series. As per the new naming scheme, devices in the G-series will now have a double-digit number in their moniker. The report named four upcoming devices – G10 (Capri), G20 (Java), G30 (Capri Plus), and G100 (Nio). However, Mukul Sharma, an Indian tipster, has suggested another phone with a G40 moniker is on its way to India. Let’s take a look at all the leaks and rumors surrounding the specs, features, and availability of upcoming of the Motorola Moto G40.

Moto G40 was recently spotted in Geekbench 4 listing with the model name Motorola XT2137-2. The device managed to score 2466 in the single-core score and 6223 in the multi-score score. It also revealed the codename of the phone to be Ibiza. The model that went through the test had 6GB of RAM and ran on Android 11. It was also spotted on the Wi-Fi Alliance database which confirmed support for dual-band WiFi on the phone. 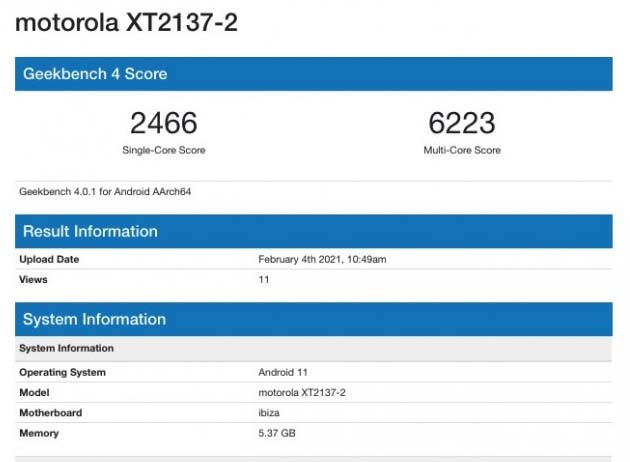 According to Mukul Sharma, the phone will be a budget-oriented 5G devices. Thus, it’s likely that it will be powered by the latest Snapdragon 480. The chipset was announced last month and it features two Cortex-A76 (@2.0GHz) and six Cortex-A53 cores (@1.8GHz). It has the Snapdragon X51 modem for 5G connectivity.

The HD+ IPS panel on the G40 will have support for a 90Hz refresh rate. It will also have a waterdrop notch to house the 13MP selfie camera. At the back, the phone will have a triple camera setup consisting of a 48MP primary lens, a 5MP macro sensor, and a 2MP depth sensor. The phone will feature a 5,000mAh battery.

According to Mukul Sharma, Motorola could launch the Moto G40 in February. The phone will initially be available in India. However, there is no information regarding the price of the Moto G40 for now.