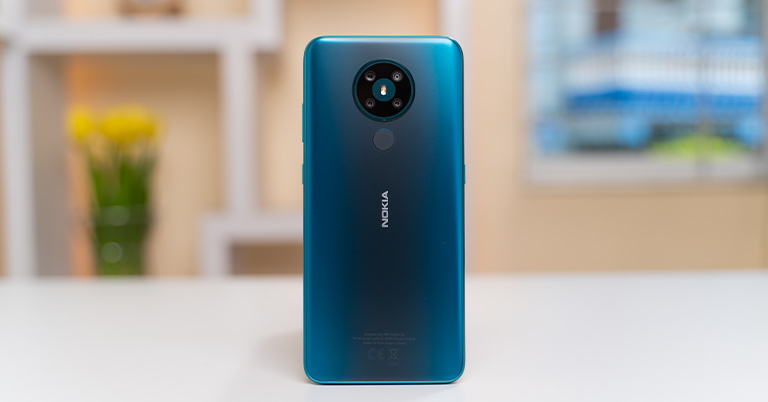 The mid-range market in Nepal is dominated by Xiaomi. And even though Samsung is trying to make a space for itself, it is still a longshot that Samsung will disrupt Xiaomi’s stronghold. So, in the midst of these two smartphone giants, where does the Nokia 5.3 stand – well, we’ll discover exactly that throughout this review.

As is the case with most Nokia phones, the Nokia 5.3 brings in the Android One experience as well. However, will customers gravitate towards this device just because of the clean and secure Android experience? Or does it bring to the table something more than what meets the eye? Well, let’s find out in our review of the Nokia 5.3.

So, I’ve got the “Cyan” color variant with me, which is actually the only color option of the Nokia 5.3 available in Nepal. It has a clean matte finish on a polycarbonate back. And despite being plastic, it does not look or feel cheap. Moreover, it is pretty sturdy and won’t attract smudges easily. Now, the arrangement of the rear cameras on a circular module is up for debate. Should they have gone for a vertical or a horizontal array? Well, I for one have no complaints about this design choice as it adds to the aesthetics. But hey, aesthetics is subjective as well, right?

Just below the camera module is the fingerprint sensor, which for the most part does the job pretty well. It is receptive but you will notice that it could have been more snappy. Upfront, there’s a notch that houses an 8MP front camera for selfies and face-unlock. We’ll talk more about the image quality later on but about the latter, I have to say, it works pretty well in bright to medium light. In low-light conditions, however, it’s a hit or a miss.

What about the audio?

Up top, you get a 3.5mm headphone jack. Personally, I have always felt that this is where a headphone jack should be placed in devices. I don’t really fancy the ones that sport it on the bottom. But once again it is a personal preference and nothing much. 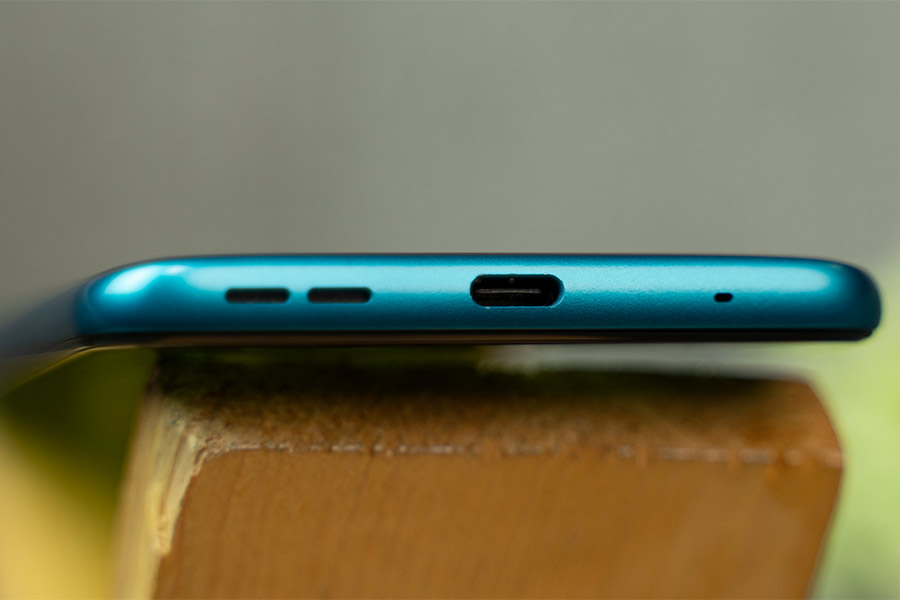 Down at the bottom, there’s the USB-C port and the speaker grills. The speakers are loud, but they will certainly not blow you away. You’ll start to feel some distortion in the sound as soon as the volume hits the high-mids. You’ll be better off using a headphone while watching videos or while playing games. But it will suffice while making calls as it is loud enough.

You’ll find a dual-sim/microSDX tray and a dedicated Google Assistant button on the left-hand side. It is a handy feature to have. However, if you find the button intrusive, you can always disable it. As in the past, there’s no default option to remap this button for some other function. But you will be able to do it via third-party apps.

On the right-hand side, you get an unsegmented volume rocker and a power button that doubles down as the LED notification. It will light up when you have a notification or while charging. It is a nifty feature that I’ve liked and do hope to see on other smartphones too. If you recall, this was present in last year’s Nokia 7.2 as well. Overall, the Nokia 5.3 has a few curves and a simplistic look that will appeal to people who are not looking for something fancy but don’t want to over-compromise on the looks either. The weight of the device is evenly distributed and feels light on hand. The device does seem durable, but you can’t really say much about the durability of budget phones. Furthermore, it does not have any IP rating, so be careful and protect it from splashes.

Getting to the display, you’re getting a 6.55-inch IPS LCD screen with a tear-drop notch. The side bezels are certainly thinner than the previous iterations. However, I felt that they could have reduced it a tad bit more. There is a significant chin out here, but it’s akin to most devices in this price range. 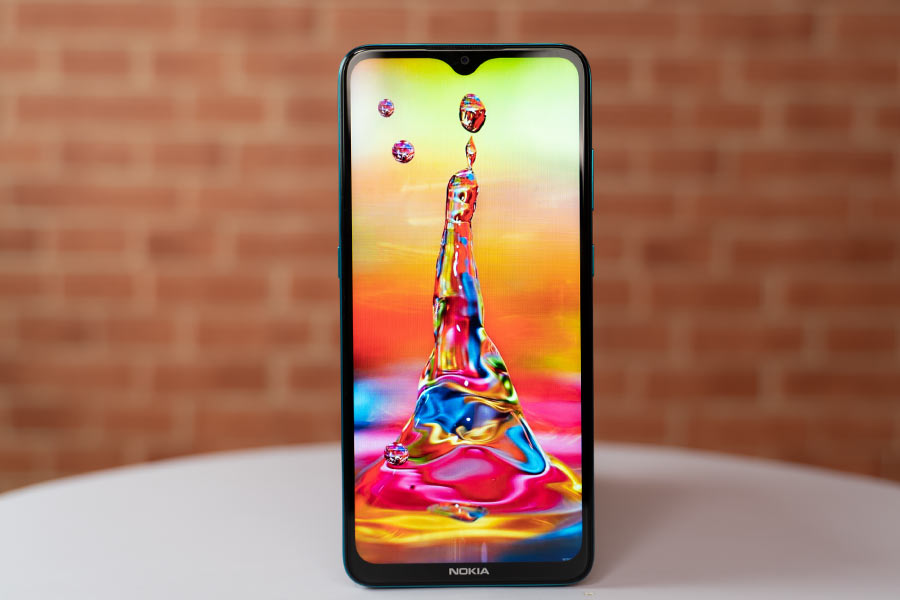 Moreover, Nokia has only included an HD+ panel, which initially I was a little bit worried about. But, this IPS LCD panel is actually not that bad as it sounds. Obviously, it’s not the sharpest panel out there, though you’ll not notice any pixelation while browsing through the web or even watching YouTube videos at an arm’s length. The brightness was just enough for me to use the device under direct sunlight.

The colors also look quite natural, but it is nothing mind-blowing and lacks the contrast that you might get on an OLED panel of the similarly priced Galaxy M21.

Performance-wise, the Nokia 5.3 is powered by Snapdragon 665 SoC coupled with either 4GB or 6GB of RAM and 64GB storage. The Snapdragon 665 chipset falls way behind the likes of Exynos 9611 found on Samsung’s Galaxy M21 and the MediaTek Helio G85 on the Redmi Note 9.

But, with the stock Android UI, it works considerably well for your everyday tasks, like social media and browsing. Though, at times I did notice stutters while navigating and apps taking a tad bit sec to load. Similarly, gaming is not going to be a breeze on this one. I noticed significant load-time and loads of stutters on high-speed games.

Anyways, the selling point of Nokia 5.3 is clearly its clean and pure near-stock Android experience. It is free from any bloatware and offers an experience similar to the Google Pixel phones. While Xiaomi’s and Samsung’s custom skin is getting pretty good, the former is still marred with bloatware and ads. Thus, I feel that the stock android experience is still a huge selling point these days. Furthermore, as a part of the Android One program, this phone is guaranteed to get 2 years of the software update and 3 years of security updates, which adds up to the value of the device.

For cameras, you get a gimmicky quad-camera setup at the back with a 13MP primary sensor, a 5MP ultra-wide lens, 2MP macro lens, another 2MP depth sensor. And to be absolutely honest, the images are just about average.

With ample light, you’ll be able to capture decent normal, and ultra-wide-angle shots.

But, when you start to compare against the Galaxy M21, things don’t look good for the Nokia 5.3.

As you can see, the Galaxy M21 has a better dynamic range, contrast, and a wider field of view.

The portrait images on the Nokia 5.3 is slightly better than that of the M21.

The subject looks more vibrant, edge detection is better and the bokeh effect is pretty good too.

In low light conditions, you’ll see a lot of noise and a lack of details in the images. There is a dedicated night mode which will extend the exposure time.

However, it takes too long to take and process an image in this mode and frankly, it’s not that great either.

As expected, the 2MP macro lens is useless and you will hardly make use of it.

Moving to the selfies, you get an 8MP shooter.

It does the basics correct, however, if you compare its selfies with that of the M21, you’ll certainly see that photos lack a certain amount of vibrancy in them.

As far as portrait selfies go, the contrast does not feel good and the M21 captures an image closer to reality with better edge detection and details.

Video-wise, you can shoot upto 4K 30fps from the back and 1080P 30fps from the front. In any resolution, there’s no stabilization from both the rear and the front camera, and videos come out wobbly with limited dynamic range.

All things considered, the cameras on the Nokia 5.3 is pretty average. So, if cameras are your main concern, you’ll be better off with the Galaxy M21 instead.

In terms of battery, the Nokia 5.3 is equipped with a 4000mAh cell. The battery backup is pretty great, as even while doing the most intensive tasks all day long, you might still be left with some juice on the device. 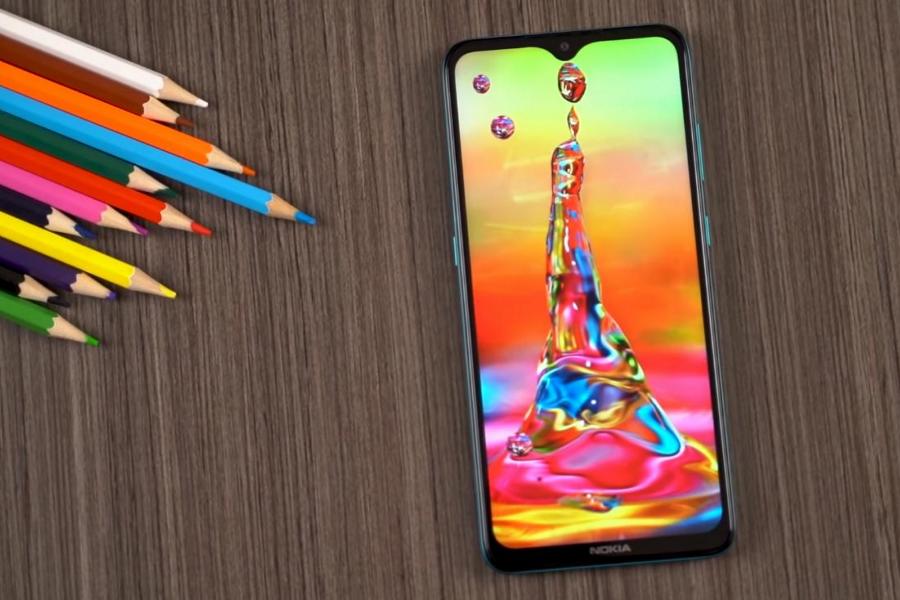 During my review, I watched videos at full brightness and after about an hour or so, the battery on Nokia 5.3 drained by only 10%. So, it is pretty great.  Sadly though, the device only charges at 10W, which takes about three hours to get fully charged from 0 to 100%. This is all the more disappointing considering how Snapdragon 665 supports Quick Charge 3.0 protocol with 18W fast charging.

Nokia devices have mostly been about the android experience and Nokia 5.3 delivers that. Hence, if you are on a tight budget, and want a non-Chinese “Stock android” phone that can do most of the tasks decently and also offer a great battery life, then you can go for it.

However, you only get an HD+ panel and the camera is pretty average too. So, I feel like Nokia could, but rather should be doing more with its budget and mid-range phones. If this had, like say a better chipset and a fast charging, it would have made this phone very compelling.