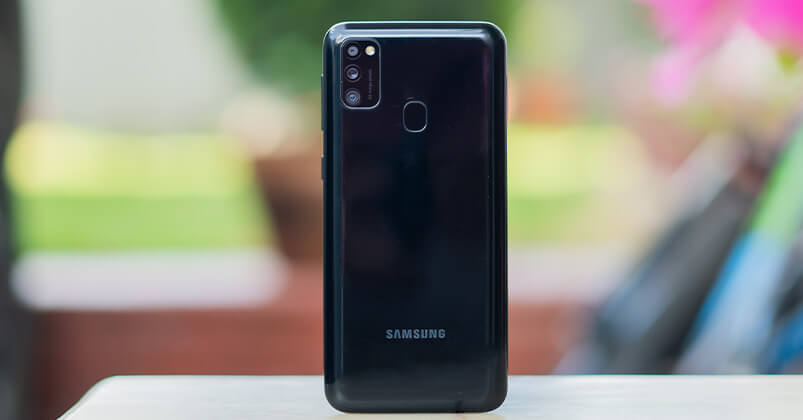 So, I have been using the Samsung Galaxy M21 for over a month now. Its predecessor, the Galaxy M20 that was launched back in 2019 was appreciated by many. The M21 here brings improvement over the M20 in a variety of aspects like display, performance, and cameras. And I think this is the first time that we have seen so much leap from one generation Samsung budget phone to another. With that out of the way, let’s get to our review of the new Samsung Galaxy M21.

Keeping that improvements aside, we cannot ignore the fact that the M21 is strikingly similar to the Galaxy M30s, spec-wise, and even design-wise. And you’ll only discover more of it throughout this review of Samsung Galaxy M21. The only difference I see is the 20MP selfie camera which was 16MP on the M30s. And what’s bizarre is that the M30s is still available in the market and for a more-or-less same price as that of the M21. Okay, the design of M-series has not been its strongest suits and the M21 is no different from the bunch.

Lightweight Build Despite A Big Battery

But the key takeaway here is that this phone has a very huge 6,000mAh battery and yet it’s not very thick or heavy. In fact, if you compare this one with other mid-range phones with 4,000 or 4,300mAh batteries, the M21 will actually feel lighter.

Nonetheless, you cannot ignore the fact that it’s still a generic design with plastic back and plastic frames. At the back, you can see the traditional fingerprint sensor which is getting rarer even in midrange phones these days because, guess what – more brands in 2020 have either moved to a side-mounted one or have gone in-display.

Yet, The performance of the sensor is fast and gets it correct almost all the time.

There’s face unlock here too which works fine, but I used fingerprint as my go-to biometric for unlocking.

More on the aesthetics, the slightly larger chin and a dewdrop notch on the top is something that has bugged me because it makes the phone look outdated. So, if you are someone who values good looks, you want to look somewhere else. I, however, will not say the same about the front of this phone. The display is a really nice looking Super AMOLED panel. And it makes me really happy knowing that it’s an FHD display despite having a budget price.

The display is protected by the older Gorilla Glass 3 but I don’t mind that knowing at least it has some kind of protection compared to the Honor 9X which I dropped from like a one-meter distance and got the screen cracked!

I am also happy to report that the M21’s display is a good one. In fact, I found it to be as good as the Galaxy A51 in terms of colors, saturation, and contrast. You can watch Amazon and Netflix content on this one at FHD resolution as it supports Widevine L1 certification.

Talking about brightness, it’s sufficient indoors but in outdoor scenarios, you might want to go to its full brightness just to make the content visible. One thing though, what this display lacks is a higher 90Hz refresh rate like the Realme 6, which is its closest competitor. But again, the display on the Realme 6 is an IPS one, and this one’s AMOLED, so there’s that!

Overall, I must quite praise the fact that you are getting a good quality AMOLED panel on the M21 as opposed to the PLS one on the M20! At least here, you can enjoy the perks of the Always-on-Display feature and a well functioning dark mode!

Now let’s get to performance, which, this time is powered by Exynos 9611. Since this is not the first time we are seeing this chipset on a Samsung phone, we know how it performs.

And in case you have not followed our review of other phones with this chipset, it performs pretty well, at least for this price!

But again, it all boils down to the competition, because, well, the Realme 6 sports a much better MediaTek Helio G90T for the same price. So, even though the Exynos 9611 performs well enough, the Helio G90T is a much better option whether you look at the benchmarks or experience gaming on the phone.

So, for the core performance aspect, the Realme 6 will serve you better.

But of course, the Samsung Galaxy M21 is not downright miserable as I found out during my review. With the improved optimization of the Android 10 based One UI 2.0, your daily tasks like browsing the web, using Instagram, messaging, a little bit of multitasking should have no problem running. However, you might notice a slight hint of lag while multitasking with heavy apps and sometimes with navigating as well.

One UI is better than ever!

That being said, One UI is great and I love it. From the notifications panel to the multitasking window to the app arrangement in folders, everything works well for me. There’s also very little bloatware and most of them can be uninstalled, unlike many Chinese brand smartphones. 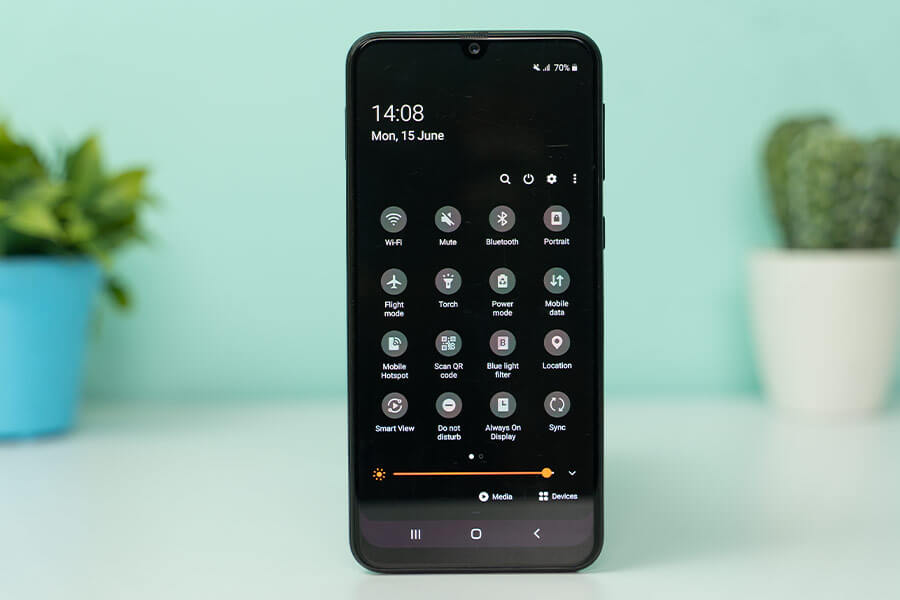 Also, another thing I like about Samsung is how they do the dark mode optimization better than the others which make the AMOLED display more pleasing to look at.

For the gamers out there, you can crank-up high-end games like PUBG to HD graphics and Ultra frame rates, but the gameplay in that setting will result in frequent lags and stutters. The best gameplay, I would say, will be a combination of graphics set to smooth with Ultra frame rates that will give you around 40-45 FPS during gaming.

In comparison, you can play PUBG in HDR graphics and Ultra frame rates pretty smoothly on the Realme 6. This makes it obvious that Realme 6 is a better gaming phone.

So, if you are someone who doesn’t play games at all, or if you are just a casual gamer, then the M21 should serve you well.

I am happy to see no compromises here unlike the J-series, which if you remember used to skimp on such aspects. Now that we are talking of things that are not compromised here, I would not forget the #MegaMonster battery as Samsung likes to call it. Here, the company has generously provided a huge 6,000mAh battery that gave me around 8 hours of screen on time with 2 hours of gaming, 3 hours of video playback, and 2 hours of social media usage.

In simple words, I would use the phone all day and still have around 30% of the battery left at the end of the day. As for charging, the phone comes with a USB Type C port and a comparatively slower 15W charging. And since the battery is huge, it takes around 2 & a half hours to go from 0 to 100%.

Okay, finally let’s talk cameras. The phone has a triple camera setup that consists of a 48MP main sensor, an 8MP ultra-wide-angle lens, and a 5MP sensor for depth effects.

One thing I noticed is that the M21’s camera is slightly inferior to its bigger variant M31. The Galaxy M31, which comes for a slightly higher price tag, has better camera capabilities in every aspect. So, that’s basically the difference between these two phones.

That being said, M21’s images are good for the most part with fast focus, vibrant colors, sufficient details, and consistent dynamic range. Wide-angle images are above average in my opinion and get the job done.

I also did compare its images with Realme 6 which is its closest competitor and my test showed that the M21 has way better focus as evident from this picture of a leaf.

Having said that, both phones are neck to neck in both normal and wide-angle image capabilities.

One difference though, in the wide-angle images from the phones is that the M21 has a wider focal length hence giving you more viewing area.

As for portraits, I have liked the Galaxy M21 better while compared to the Realme 6. Samsung does well in terms of subject focus and the background blur!

In the selfie game too, the M21 takes the lead as compared to the Realme 6. The images from its front camera are bright with good colors, good HDR capabilities, and a natural-looking skin tone.

The portrait selfies look okay but lack proper edge detection which is expected as it is software at work.

Talking about the night time images, they are exactly the opposite of what I had to say about the day time pictures. They lack in detail, there’s lots of grains and noise and in most cases, they are unusable. The night mode that we get in here does help a little bit, but its performance is nothing mind-boggling.

Video-wise you can shoot up to 4K @30fps. While there is no stabilization in 4K videos, the 1080P 30fps is quite stable. You also get the super steady mode, super slow-mo, slow-mo – those fun stuff are here too, so that’s great.

Alright, now let’s talk about things that make for a better smartphone experience which are the speakers and the headphone performance.

The single downward-firing speaker is not very loud but it’s crisp and the sound is not distorted!

Similarly, the headphone works really well with its 3.5mm TRRS output. And this is usually the case with most Samsung phones which is because of very good DAC and amplifiers that the company uses. 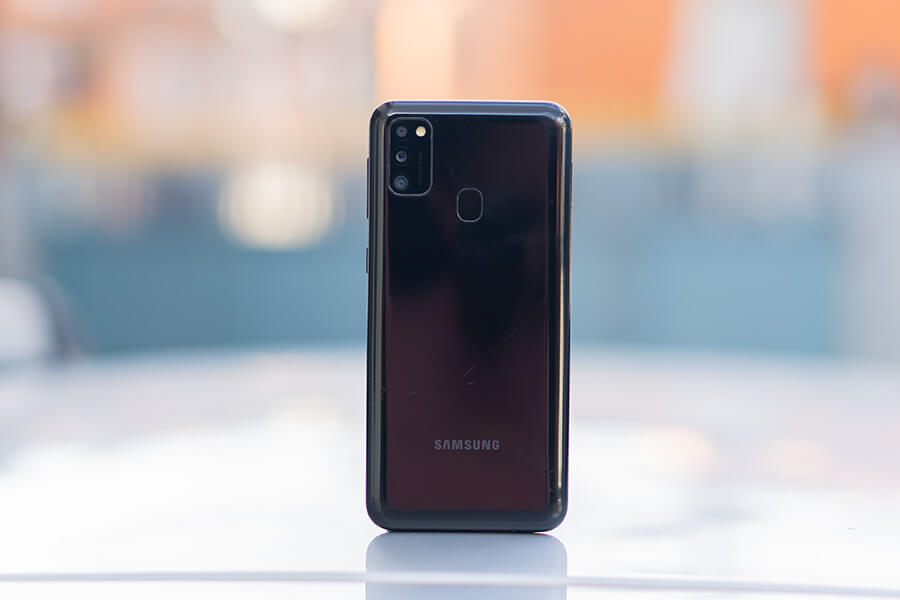 I used my Sony Studio wired headphones and the audio coming out of the M21 is quite good. Actually, during my review, I also it on the Realme 6 and it didn’t quite do well like the Samsung Galaxy M21. Now, this might be a very small thing and I often overlook such aspects on budget and mid-range phones. However, for some, it could be really important.

So that was it for our review of the Samsung Galaxy M21. To conclude, I have liked what the company is offering with the M21. And although it is very similar to the M30s, the M21 comes with the latest Android 10 version. This means that the M21 holds a better possibility of getting longer security and firmware updates in the course of its life.

Now talking about that competition I have been mentioning throughout this video – the Realme 6, it does offer you better gaming experience with its better SoC and 90Hz display panel, but M21 has its own benefits as it gives you a little bit of everything.

And personally, I think the Galaxy M21 is perfect for non-gamers and someone who watches a lot of movies on a single charge and want the best camera at this price bracket. In the future though, I would want to see Samsung come up with an M-series smartphone that focuses more on gaming, perhaps. That would be great.