Home Nokia Nokia 5.4 launched: Comes with a punch-hole display and a quad-camera setup 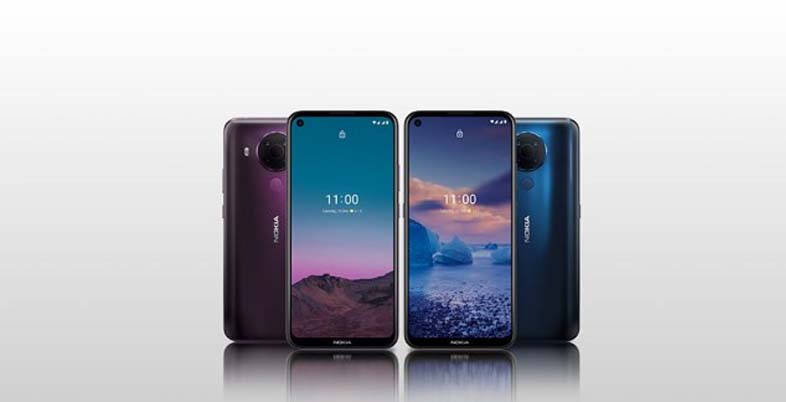 Nokia 5.3 saw a delayed-release in Nepal compared to the phone’s international launch. However, it had been reported that the brand is already working on its successor. And the successor is finally here. Let’s learn more about the specs, features and expected price and availability in Nepal of the new Nokia 5.4.

Nokia 5.4 comes as another addition to the Nokia 5 series which is basically a mid-range segment. This device runs on the Snapdragon 662 and has a Nordic design, similar to that of the Nokia 3.4.

This time around, Nokia has made some changes on the front of the device. The Nokia 5.3 came with a 6.55-inch IPS LCD panel with a waterdrop notch on the top. However, the screen size of the Nokia 5.4 is comparable to that of Nokia 3.4. Thus, the upcoming Nokia 5.4 has screen that is closer to 6.4-inch in diagonal length. And it has a resolution of 1560 x 720 pixels. This time around, Nokia has included a punch-hole instead of a notch to house the front camera.

A capacitive touch-sensor is there on the back just below the camera module. And talking about the colors, there are two options – Polar Night and Dusk. On the back, there’s a quad-camera setup in a circular cutout. The primary sensor is of 48MP. A 5MP ultra-wide lens, a 2MP depth sensor, and a 2MP macro lens complete the setup. Up front, there’s a 16MP sensor inside the punch-hole.

Nokia 5.4 runs on the Snapdragon 662 SoC. It is the same chipset that the Poco M3 and the Moto G9 series devices are equipped with. The chipset can be paired with either 4GB or 6GB RAM and either 64GB or 128GB storage.

The device packs in a 4000mAh battery that charges at 10W via the USB-C port.

As expected, the phone ships with Android 10. However, an update for Android 11 is already on the work. The major selling point of the device will still be its software experience. It will offer a near-stock Android experience. The Android One Program will guarantee 2 years of the software update and 3 years of security updates.

Nokia 5.4 will be available for purchase in Europe later this month. The base configuration i.e 4/64GB variant is priced at €189. There are other two variants, 4/128GB and 6/64GB. However, they are yet to receive official pricing.

HMD Global will probably launch this device in other regions including Nepal. However, a specific date has not been revealed. And the price of the base variant of Nokia 5.4 in Nepal will be around NPR. 28,000.