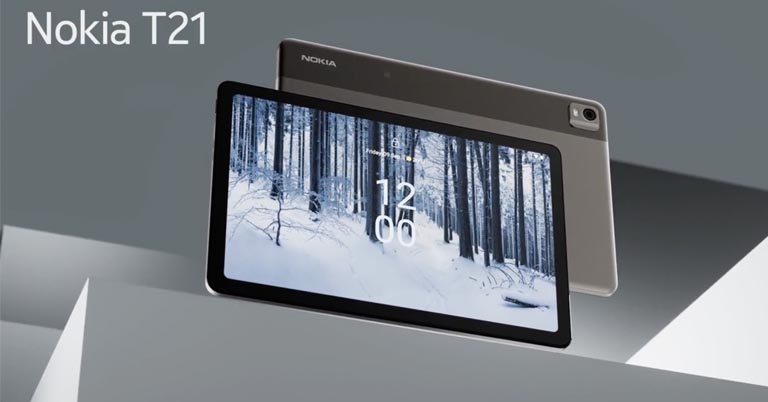 Nokia also introduced a new tablet at IFA 2022, dubbed the T21. The tablet is the successor to T20 and is now available in India. So, let’s take a look at the specs, features, expected price, and availability of the Nokia T21 in Nepal.

The first thing you will notice on the Nokia T21 is that it now sports a dual-tone finish with a redesigned camera bump. Nokia has opted for aluminum for the most part while the antenna cover is made up of recycled plastic. The tablet also has an IP52 rating for dust and splash resistance. Likewise, Nokia has also moved on from the Ocean Blue shade that it used on its previous tablets.

Nokia T21 has the same 10.4-inch 2K IPS panel as its predecessor. It has a typical brightness level of 360 nits. This time around, Nokia has even added support for a stylus. According to the company, you will be able to use the T21 with Wacom Active ES 2.0 styluses. Interestingly, you can use the tablet as a second screen for your Windows laptops. Inside Nokia has removed the Unisoc T610 to make room for the Unisoc T612 chipset on the T21. Both the chips are based on a 12nm process and boast the same octa-core CPU arrangement. That being said, T612 does come on top with a newer instruction set architecture.

Nokia has paired the chip with 4GB of RAM. Users can choose between 64GB and 128GB of internal storage. There is also the option to expand the storage using a microSD card.

Nokia T21 ships with a near-stock version of Android 12 out of the box. In addition, Nokia has promised two years of software updates. That means it will even run Android 14 when it comes out later. Furthermore, the tablet will receive security updates till 2025.

There are a total of two cameras on the new Nokia T210. Both the front and rear shooters come with an 8MP sensor. That being said, the one on the back has Auto Focus and an LED flash that the front shooter lacks.

It is fueled by an 8,200mAh battery with support for 18W fast charging support. The tablet is compatible with PowerDelivery 3.0 chargers.