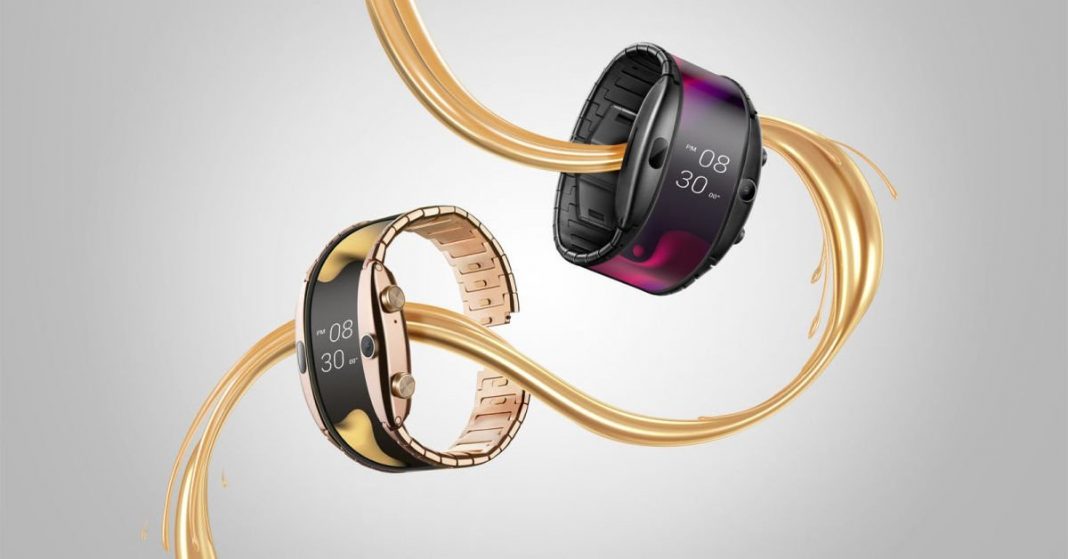 We saw quite a lot from Samsung’s Galaxy Fold and Huawei’s Mate X foldable smartphones. It was obvious to see such innovative products from such big players in the smartphone arena. But the story of the foldable device does not actually end there. Alongside the Mate X, Nubia also launched the Nubia Alpha foldable smartwatch at a grand event in MWC 2019. Written as Nubia α, this foldable smartphone also doubles as a flexible smartphone.

The concept of foldable looks truly fascinating. The idea of using a mobile device to view contents into a large screen with a privilege to bend and carry it around the pocket is surely amazing. To achieve more or less the same amount of versatility, ZTE’s subsidiary brand this time launched a Nubia α smartwatch.

The display on the smartwatch comes in a tall and narrow form factor. A 4.0-inch Super AMOLED panel has been used on the device, which comes with 960 x 192 pixels resolution at 45:9 aspect ratio. To develop a foldable display for the smartwatch is not an easy job. So Nubia collaborated with Visionox, which happens to be a specialist in the flexible display business. Alongside the flexible display, the wearable also comes with water and dust proof body. It has also received an IP67 certification for that.

Apart from the flexible screen, the phone has got Qualcomm’s Snapdragon Wear 2100 chipset, which is rather dated. The chipset has already been replaced by Wear 3100 chipset last year. The device also comes with 1GB of RAM and 8GB of onboard memory. As far as battery is concerned, the wearable is fueled by a 5000mAh battery. And according to the company, the battery will keep the device alive for a day or two on a single charge. Adding to the hardware is a 5MP camera, which can be handy while doing some video calls and for taking selfies.

Being a smart wearable, the smartwatch also comes with a fitness tracker to monitor the heart rate, sleep cycle and exercise patterns. And these features are accessible from Nubia’s custom OS, which goes by the name of Android Wear OS 2.1. Furthermore, the OS also supports voice commands, multi-touch feature, and some finicky air gestures just like what we saw on the LG’s new flagship devices.

“All of your information is perfectly organized and within reach. Infinitely customizable, intuitive, and visually striking, our new wearable OS is a whole new way to interact with what you care about most,” the company boasted in a press release.

On the connectivity side, this smart device comes with Bluetooth 5.0 and Wi-Fi. There is also the 4G LTE connectivity option on one variant with which users can use the device as a smartphone. However, only an electronic SIM (or eSIM) can be used in the device.

The LTE variant will be available through China Unicom starting from April of 2019. And this eSIM variant will land in Europe in the Q3 of 2019 eventually in North America in Q4 of 2019. But as far as Nepal is concerned, the device may not launch here at all.