Nubia is another Chinese smartphone company that made its entry to the Nepali market recently. And they entered with four phones – Nubia V18, Nubia Z17 Mini, Nubia Z17 Lite, and Nubia Z17 MiniS.

Now, the company is known for its innovative products, such as the Nubia X – a bezel-less phone with dual screens! And besides that, they pack good specs for the price as well. Here, we review three of their phones as they belong to the 25000 – 30000 category. 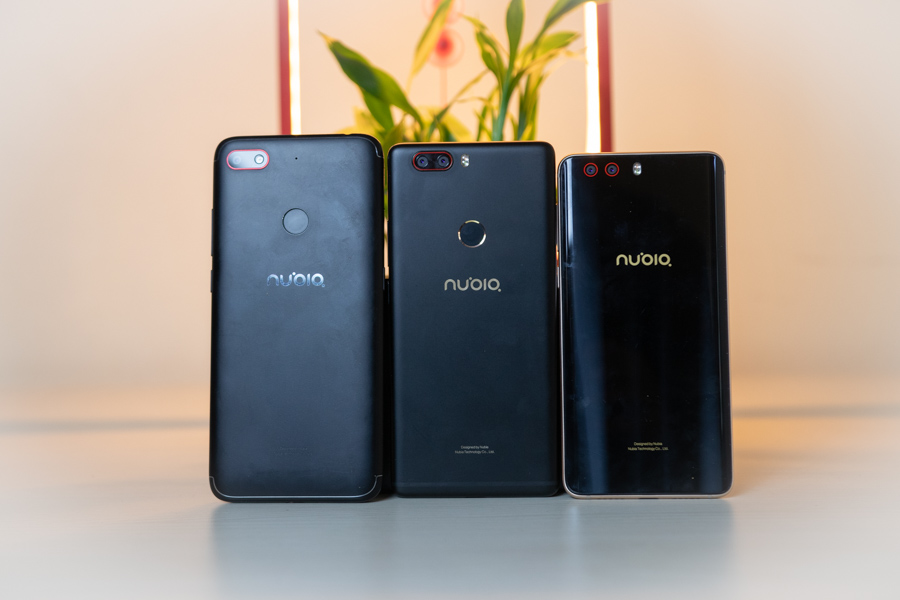 The Nubia V18 is the cheapest of the bunch, costing Rs.25000. For that, you do get a metal build, but with a smooth plastic finish, that makes it appear not-metal! Due to this, it doesn’t look and feel as premium as the other two. And since this phone has a bigger screen, it stands out as the largest phone of the bunch, but at the same time, has the worst built among the three. It flexes quite a bit when bent. So, there are some build issues.

It has a single camera at the back and a rear-mounted fingerprint sensor. The volume rockers and power button are on the right while there is also a dedicated camera button on the left.

This one stays true to metal. With a metal unibody design, perfect edges and curves, this looks really good. The smooth metal finish also makes it feel good on the hands. A seamless body combined with its subtle gold accents makes it look almost perfect!

Its build quality is also quite good. There are no flexes or creaks of any kind when bent or so. All buttons are on the right, and there is a rear-mounted fingerprint sensor at the back. But it does not have a headphone jack!

This one is in a league of its own. It has a glass back with metal frame, and the fine finish makes it feel very premium on the hands. The gold accent on the frame makes it look all the better, but the glass attracts some finger smudges and such, and at the same time might not be able to withstand drops or impacts.

Its buttons are on the right as well, and the back only houses the dual camera setup. The fingerprint sensor is on the front embedded on the home button itself. Also, this one shows a bit of flex and creaks when bent, but I guess, that’s normal for a glass phone. This, too, misses out on the headphone jack.

Overall, the Z17 MiniS looks the best, while the Z17 Lite wins in build quality. But the V18 has the advantage of having a 3.5 mm headphone jack over these two.

In terms of display, all of these features IPS LCD panels, but they differ in size and in quality. 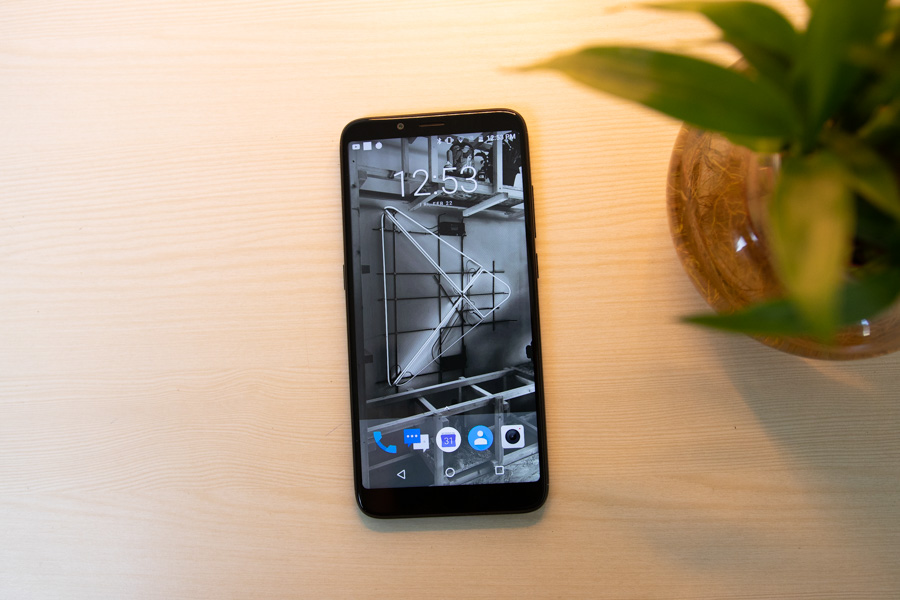 The V18 gets a large 6.0″ display with an 18:9 aspect ratio. It features a Full HD+ resolution but with its larger display, it fails to compete with the other two in terms of quality, maybe due to it’s lesser pixel density. It’s not that bad, because it still is a Full HD, which some phones still don’t give you for the price. The Z17 Lite features a 5.5″ display with Full HD resolution in a smaller 16:9 aspect ratio. But besides the smaller aspect ratio, everything else about the display is pretty good. It has decent color accuracy, a fair amount of brightness, and non-existent bezels at the side. Looking at the display on this one, it feels like this kind of display is more than okay, we don’t really need bezel-less displays with a notch or what not. The Z17 MiniS has the smallest screen at 5.0″. But since it does pack the same Full HD resolution, it gets better pixel density, and so, has the best display quality among the three. The colors on it are punchy, without being oversaturated, and the brightness is ample to use outdoors as well. This is simply a great display, and so, I don’t mind even if it is small.

The Nubia V18 packs a single 13 MP camera at the back and an 8 MP camera at the front. And to say the most, the rear camera is better than your average camera, I mean, more than you’d expect from a phone like this. It has good color reproduction and okay dynamic range.

The selfie camera, though, is not good. The images don’t come out sharp enough. There are less details, are muddy, and the white balance seems to be off. The dynamic range on it is also not great, photos can come out soft, and it has some focus issues as well. Also, sometimes, it appears that the photos have been beautified.

The Z17 Lite packs a 13 MP primary camera accompanied by a 2 MP depth sensor at the back. And the photos on this one are pretty good! Pictures come out sharp and detailed. There’s a lot of clarity in the images, the color reproduction is nice, and the dynamic range is also fantastic! Overall, the photos look very rich, both in colors and details. The portrait images are also good enough but seem to lack a bit of “something” than the normal images.

In terms of the selfie, it features a 16 MP camera. And that makes for quite the details in your selfies. The colors are there, but the white balance seems slightly off. Portrait images are great…the edge detection and background blurring are pretty balanced.

The MiniS packs a 13 MP primary camera with a 2 MP depth sensor. And the camera is the best among the three. Color tones are rich, the white balance is on point, images are vibrant. Actually, the images are more or less, similar to the Z17 Lite, but I don’t know, it looks very slightly better.

For selfies, there is a dual camera model compromising of a 16 MP primary camera and a 5 MP depth sensor. The details are good, sharpness is also okay and the color reproduction is excellent. And since it has a depth sensor in the front too, it can capture some really great bokeh images!

The performance across all the three phones are decent, to say the least.

The V18 features a Snapdragon 625 processor, which seems a bit underpowered for a phone that costs Rs.25000. It has 4 GB of RAM, which can handle normal day-to-day tasks easily. You can also play PUBG at low settings without many noticeable stutters. But it does not have any kind of heating issue even after long hours of gaming sessions.

Both these phones feature the Snapdragon 653 processor and a 6 GB of RAM. They perform as expected, with smooth transitions between screens, and multi-tasking. For daily usage, the phones run smooth, without the slightest bit of stutters. As for gaming, you can play PUBG on both at medium settings. But these have a bit of heating issue during long gaming sessions. Nothing alarming, but just something to mention.

The Nubia V18 comes with Android 7.1.2 stock Android One UI, so, everything is pretty basic on that front. It does have its fair share of bloatware even though it’s stock Android, but, they are of a minimal amount, so, it’s okay. The UI is as smooth too, so, no problems on that front, either.

The Lite and MiniS run on Android 7.1.1 with Nubia UI 5.0. They don’t feel that bad, though. The only thing I can complain about here is the shape or layout of the icons which look too flashy!

In terms of battery, the Nubia V18 is the best. It has a big 4000 mAh battery and with Android One UI, battery optimization seems good. It can give you 6 hours of screen on time with mixed usage. The only problem is that it still comes with a micro USB port without any fast charging. So, it takes about 3 hours to fully charge.

The Lite and MiniS both come with 3200 mAh battery, and they give out about 4.5 hours of screen on time. These, too, however, have 18-Watt Fast Charging and USB-C, so, charge fully in under 2 hours!

To sum up, Nubia V18 is a bit difficult to recommend. Because for a price of Rs.25000, it’s got quite uninspiring materials. There’s only a single camera, with the selfie camera not being that good. Plus, the performance is also not something you can talk about. The battery life on it is good, but, if you add some cash, you can get one of the other two, which are a lot better!

The Z17 Lite has the best build quality among the three – no creaks, no flexes! It also looks premium, but not to the level of the Z17 MiniS. But, the non-existent side bezels look really really appealing! So, for a price of Rs.26,500, this seems like a good buy.

The Z17 MiniS has a proper glass build, making it the most premium of the three devices. It gets 4 cameras too, which take some great pictures. Of course, the display is only 5.2″, but I don’t really mind that…for the look and the feel of the phone. At Rs.28000, this can be the one to go for if you’re looking for a premium phone under Rs.30000.

Overall, there are quite a few options available in the price range of Rs.25000 – Rs.30000. But the premium look and feel offered by these devices, especially the Z17 Lite and Z17 MiniS seem unmatched. And so, even though these are older phones, they’re still quite relevant today.