OnePlus introduced us to its Concept One in the latest edition of the Consumer Electronics Show (CES). And now, OnePlus seems to have shifted its focus at the upcoming OnePlus 8 series. The series will feature OnePlus 8 and OnePlus 8 Pro. A few days ago, the news of a midrange moniker OnePlus 8 Lite also hit the internet. The news has, now, been shadowed by the reveal of OnePlus 8 Pro which has appeared in the Geekbench database, and there’s the news of it having a smooth 120Hz refresh rate display as well.

OnePlus 8 Pro has already gone through the Geekbench Benchmark Test, which the site uploaded the result of the test on January 10. The device went through the benchmark test as “GALILEI IN2023“. It scored 4,296 points in Geekbench’s single-core test and managed to pull off 12,531 points in the multi-core test.

OnePlus 8  Pro Specs as of now

The Geekbench Benchmark database has revealed some of the key specs of the upcoming OnePlus 8 Pro. According to Geekbench’s database, the phone will be powered by the “Kona” SoC. Never heard of the name? Well, “Kona” is the codename for Qualcomm’s latest Snapdragon 865 processor.

The main feature of the SoC is the 5G connectivity. The Snapdragon 865 doesn’t come with an integrated 5G modem but Qualcomm has announced that it will come bundled with a discrete X55 modem. With this, Oneplus 8 joins the list of upcoming 5G phones such as the ZTE Axon 10s Pro, Xiaomi’s Mi 10 series and Xiaomi’s Black Shark 3.

The phone will come with 12GB of RAM. There is no information about the internal storage onboard on the tested device. We are confident about the flagship moniker arriving with different storage configurations. The phone will run the latest Android Q.

OnePlus 8 Pro will come with a display with a refresh rate of 120Hz. It was hinted by the company’s CEO, Pete Lau, at the CES 2020. Talking about the new display technology, he added that the OnePlus 8 Pro could be “the smartphone with the best display in 2020“.

In a screen technology communication event held yesterday, OnePlus displayed its latest mobile display tech. It is, of course, the 120Hz refresh rate display. Official sources have confirmed that the research phase is over and it has already moved towards the development phase. And that means we might just get to see it on the upcoming OnePlus 8 phones. Most probably the OnePlus 8 Pro. 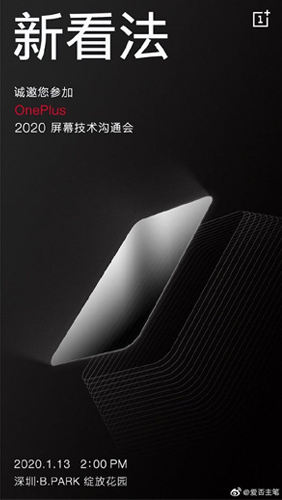 As per the released statement, aside from the information about the 120Hz refresh rate, it goes on to talk about a 240Hz touch sampling rate. Furthermore, it will have 8.3ms of rendering time per frame.

OnePlus has labeled this optimized display as “Smooth Chain“. It basically comprises of hardware and software-optimized touch input and display output chain. This helps to bring down the delay between input and response time. Speculation is that this technology utilizes something similar to Huawei’s GPU Turbo tech. Though it is just speculation nonetheless.

Another feature introduced in the event was the MEMC. It is an abbreviation for Motion Estimation, Motion Compensation. It is a nifty feature that allows for a smart frame insertion and interpolation layer. And what’s the result you ask? Well, it helps to process lower frame-rate video up to a simulated 120fps. However, the catch here is that it should actually be done in real-time as all of this is handled by an independent chip in the display.

Now, we all know for a fact that OnePlus does not manufacture display panels itself. However, they have made a strong point in saying that the display will be a very accurate one. As a matter of fact, the company is using Just Noticeable Color Difference as its accuracy metric. And the claimed value for this display is 0.8. Now, for measurement purposes, anything below 1 is considered to be great!

Moreover, this panel is a true 10-bit for 1.07 billion colors. There’s also 4096 levels of brightness. However, not a single mention is there about HDR support. Maybe it’s a certification pending situation. Still, the levels of brightness will definitely come in handy for any HDR implementation.

Don’t forget to check out our long term review of the OnePlus 7T!