For a long time, we have seen Oppo rolling out camera-centric mid-range smartphones. But this time, Oppo has brought a flagship smartphone with the innovative design in the Oppo Find X smartphone. With this new design language, Oppo has been able to pack the display with the highest screen-to-body ratio in any smartphone.

When the rumors were followed, Lenovo Z5 was supposed to be a true bezel-less smartphone but that all turned out a hoax at the end. Oppo’s sister company Vivo had also brought a smartphone with near bezel-less display namely known as the Vivo NEX S. The NEX S had 91.24% screen-to-body ratio, a value, which the tech giants like Apple and Samsung have been craving for a long time now. To increase the screen-to-body ratio, iPhone X ditched the Touch ID and came up with a notch up top to adjust the front camera and other sensors. But NEX S did it better without a notch and similar is the case with the Oppo Find X. Vivo NEX S had a motorized selfie shooter but the Find X has the top part of the phone motorized. The crammed up top part of the phone includes all the cameras (dual rear camera and a front camera) and other sensors. The motorized part pops up when the feature is accessed.

The most interesting part of the Oppo Find X is its innovative design. To cut down the bezels on the top or the annoying notch, Oppo developed a motorized system that contains 3D face scanning system, 25MP front camera, and 16MP +20MP dual rear camera. These crammed up components motorize up when accessed. They pop up when the phone is tried to unlock or when the camera is accessed.

Oppo Find X comes with the tall 6.42-inch display with the curvy edges just the Samsung Galaxy S9. The display on the Find X possesses the highest screen-to-body ratio in any smartphone. The display on the phone occupies 93.8% of the front area. And that too without a notch. Samsung’s AMOLED panel has been used as display material in the phone, which features Full-HD+ resolution. So the display is surely going to look sharp and vibrant. The display is protected by Corning Gorilla Glass 5 on the top to shield the display from the scratches and cracks during the fall. 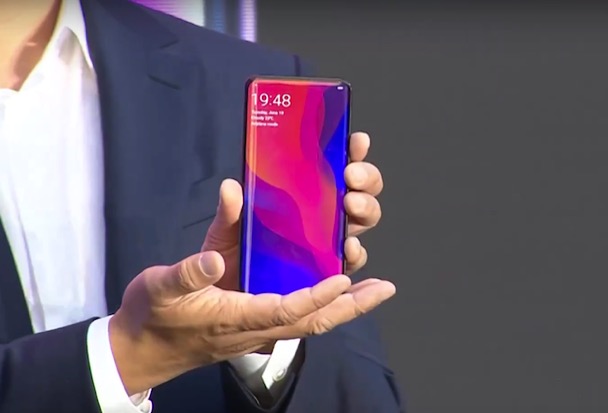 To evade the security vulnerabilities, Oppo has added the 3D face scanning system just like the iPhone X. The company claims, with this technology, the users can unlock the device merely in 0.5 seconds and that too with great accuracy. That sounds really great but the absence of the fingerprint sensor is really a bummer. Yes, this so-called flagship does not contain any kind of fingerprint sensor (physical fingerprint sensor or an under display one).

The Find X is flagship by all means. It has the powerful Snapdragon 845 chipset with 8GB of RAM alongside. The phone also supports an SD card, which lets the users expand the storage up to 400GB.

On the software side of things, the Find X comes with an Android OS out of the box. To spice up the things on the software in Oppo’s way, Oppo has included its home-baked Color OS on the top. The Color OS highly resembles the UI of the iPhone. We would definitely prefer the stock version of Android. Nonetheless, it is not the worst UI by any means.

Oppo has a great history of providing a remarkable set of cameras in its mid-range handsets. And in its flagship model, the smartphone maker does not disappoint either. In terms of camera, the Find X employs a camera pair with 20MP and 16MP sensors at the back, both of them furnished by f/2.0 aperture. And up front, there is a whopping 25MP camera for the selfies and video calling. Since the cameras are crammed up inside the phone, they only pop up when the feature is accessed.

We have seen numerous flagships with a ton of appealing features but falling short in delivering the horsepower. But that’s not the case with the Oppo Find X. The handset has stuffed an ample 3730mAh battery to suffice the needs of the users so that the users do not need to run towards the charger every now and then. Also, the smartphone has included a VOOC technology to charge the device quickly. With the VOOC technology, the charger injects 20-watt power (5V/4A) to speed up the charging process.