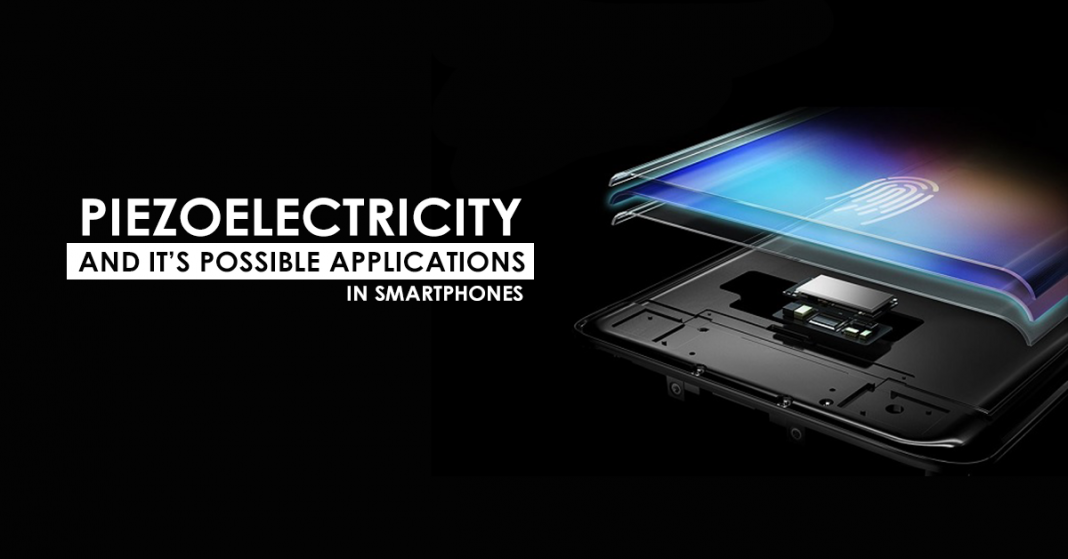 A few days ago, Vivo smartphones teaming up with Qualcomm unveiled their on-screen fingerprint sensor that brings ultrasonic fingerprint scanning to mobile devices, also known as biometric authentication. The technology use Piezoelectricity that changes mechanical pressure or sound vibration to exchange ultrasonic signals which travel through its OLED screen and create a 3D map of your fingerprint under the screen. So, what exactly is Piezoelectricity (pronounced as pee-ay-jo) and what does it hold for future applications in mobile computing? Let’s take a brief look:

Quartz crystals (Silicon dioxide, found in sand and most types of rock) are the most common minerals on Earth that produce electricity when pressure is applied to it. Under any stress or sound vibration, these quartz crystals develop an electric potential (voltage) across its sides. The voltage can drive current in an electric circuit. Conversely, when the crystals are subjected to an electric field they stretch or squeeze themselves by vibrating back and forth. A Crystal is a scientific name for any solid whose atoms or molecules are arranged in a periodic or repeating structure (a 3D structure). This structure repeats endlessly on the same building block, also called a unit cell. In most non-piezoelectric crystalline materials, the atoms are arranged symmetrically around a center point unlike other crystals, which do not possess symmetric structure. These crystals are electrically neutral, which means the positive charges cancel out the negative charge. But if you squeeze or stretch these materials, the atoms get disarranged which produces a small amount of energy that needs to be released for the material to obtain its original shape (similar to compressing a spring). This small amount of electrical energy can be stored or drive an electric circuit. Also, when electricity is applied to such crystals, they tend to stretch or squeeze depending on the amount of voltage applied. More materials are piezoelectric then you might think, such as DNA, bone, and silk.

Nearly all applications that require the measurement of dynamic pressure change uses piezoelectric materials because of its better contribution in the results than any other conventional sensors. Since piezoelectric sensors have a high-frequency response and a better signal conversion, they provide fast and accurate control over a long period of time. These sensors can be used in every small electronic gadget ranging from computer chips, microphones, record players and even quartz watches that keeps your time running precisely. Piezoelectric speakers support every application that efficiently produces sound from small electronic devices such as earbuds, musical greeting cards, sound producing toys etc. Voice recognition software also employ piezoelectric crystals that convert the sound vibration of your voice into electrical signals and vice-versa.

The most recent innovation that uses piezoelectricity is in the sports industry, like tennis. In order to provide more comfort and power while attempting a shot, players requested racquet manufacturers to reduce the shock vibrations through the player’s arm. Piezoelectric fibers were embedded around the racquet throat and a computer chip embedded in the handle such that, when the ball is hit the fibers bent and produce charge which is transmitted to the silicon chip through a circuit. These charges are amplified and sent back to the fibers out of phase in an attempt to reduce the vibration by canceling out the initial vibration produced when the ball was hit. Wearable technologies that include fitness and activity wristband, monitors that observe distance, respiration, heart rate and even sleep patterns use piezoelectric sensors. The mechanical stress and vibrations of your body organs are converted into electrical signals and are transmitted via Bluetooth, Wi-Fi or any other wireless signals into your smartphone apps. Wireless blood pressure cuffs that measure patient’s blood pressure through a phone app is also based on piezoelectric energy harvesting technique. Smart watches that can manage texts, calls, and emails, smart clothing devices that monitor body movement and other vital signs, smart eyeglasses that can record photos, videos and connect to the Internet, all these wearable devices will use piezoelectricity in the imminent future.

Also, researchers at China developed a new transparent material that is attached to a smartphone touch screen. This transparent material on the device generates electricity whenever the user taps onto in. The mechanical energy from these motions could be then converted to electrical energy. Scientists at Lanzhou University have invented a transparent silicon rubber known as PDMS. PDMS consist of thin wires (about 140times thinner than a human hair). This material is then laid on top of the smartphone screen. When the wires are bent (when touched on the screen), they generate electricity. The voltage generated can be stored in the phone’s batteries. Further, researchers at the UK have initiated a new startup company which uses a special type of energy- harvesting rubber forged out of piezoelectric material. The rubber is placed under the sole of your shoe and generates electrical energy from the force of your body weight to the ground. These rubbers can charge your electronic devices while walking down the street. So what’s next for piezoelectricity in the upcoming future?