The CEO of Realme India has revealed some interesting details of their new flagship phone, the Realme 5. The phone will feature a quad-camera setup, the main one being the 64MP sensor. Today the company announced more details on them, not the specs, just the camera setup.

The Realme 5 will have a Samsung ISOCELL bright GW1 sensor, a first for any smartphone. That is basically the 64 MP sensor where all the hype revolves around. The other sensor, since it is a quad-camera setup will be the ultrawide, telephoto and a depth sensor combo.

The primary lens has a footprint of 1/1.72″ while the pixel size comes in at 0.8µm. According to the company, the camera will provide clearer images, better details even when cropped and zoomed. The camera sensor is of Teracell variety and will create 16MP binned photos. 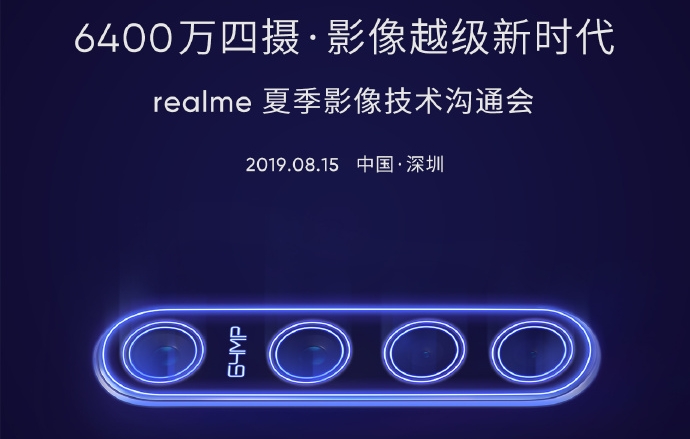 As for the second sensor, it’s a super-wide-angle f/2.0 camera with a 119-degree FoV. The third is a dedicated microlens which allows users to shoot from up to 4cm with impressive details. And finally, a depth sensor to neatly tie up the quad-cam setup.

Placement of the cameras is in vertical order, same as on the Realme 3 Pro. Plus a yellow ring around the primary lens and a 64MP badge to flex on people who are stuck with just 48 megapixels. It will come with a dual-LED flash as well.

Rest of the phone

While the phone itself will get an official launch in China on August 15, we have very little knowledge about the device. It will be a flagship phone and a successor to the Realme 3. Whether the Realme 5 will be blessed with the 64MP sensor or not remains uncertain. For all we know, a Realme 5 Pro might be in the works. We might also see Realme move on from ColorOS with their own Realme OS. Plus being a flagship, expect the phone to break Realme’s 20k (Indian Currency) price barrier as well.