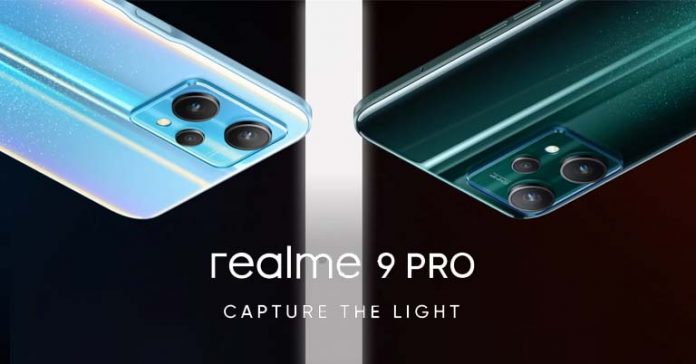 Realme 9, 9i, and Pro+ are already available in Nepal. And now, the Realme 9 Pro has made its way in the Nepali market as well. In the article, we will be discussing the specs, features, official price, and availability of the Realme 9 Pro 5G in Nepal.

Realme 9 Pro 5G was among the first phone of the latest number series when it launched in India back in February. It is the successor to last year’s Realme 8 Pro and brings 5G to the mix. Specs-wise, it is the middle ground between Realme 9 and Realme 9 Pro+.

Realme 9 Pro has a bigger and faster display than its predecessor but at the expense of the panel quality. It features a 6.6” FHD+ panel with a 120Hz refresh rate. The display can switch between six levels of refresh rates based on the content on the screen.

Likewise, the touch sampling rate has been bumped to 240Hz as well. That being said, it uses an LCD panel which is a downgrade from 8 Pro’s AMOLED display. Realme 9 Pro measures 8.5mm in thickness and weighs around 195 grams. It is available in three color options: Aurora Green, Midnight Black, and Sunrise Blue. The latter comes with a Light Shift Design which allows the phone to change color based on its exposure to sunlight.

For performance, Realme has turned to Qualcomm’s Snapdragon 695 5G. On a quick glance, it may look like a downgrade from Snapdragon 720G on the Realme 8 Pro, but it’s not. Snapdragon 695 actually has newer Cortex-A78 and Cortex-A55 cores, compared to Cortex-A76 on the 720G. Likewise, graphics performance is also better on the 695 with the Adreno 619 GPU.

In addition, the new chipset brings a more power-efficient 6nm process and 5G connectivity as well. The chipset is paired with 6GB and 8GB of RAM and 128GB of internal storage.

Realme 9 Pro features a triple camera at the back compared to the quad-camera setup on its predecessor. Moreover, the resolution of the primary camera has been reduced to 64MP from 108MP. Accompanying it is an 8MP ultrawide and a 2MP macro lens. Upfront, you get a 16MP selfie camera within the circular camera cutout. Realme 9 Pro gets its juice from a 5,000mAh battery compared to a 4,500mAh cell on the 8 Pro. Unfortunately, the charging speed maxes out at 33W. Moving on, the phone ships with Android 12 with Realme UI 3.0 on top.