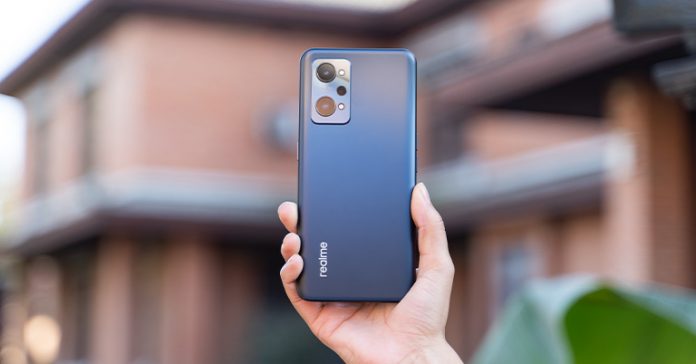 In this review, I’ll be discussing all about the new Realme GT Neo 2. If you’re not aware, Realme seems to be focusing a lot on the premium mid-range segment recently, by launching multiple phones in its GT series.

This one here is already their 5th premium phone in a space of what—3 to 4 months—which goes on to say that they really want to replicate the success of the OnePlus Nord 2, which is the highest-selling phone in India under the INR 30,000 price segment. And for this review, I have been using the Realme GT Neo 2 alongside the Nord 2 to give you a better insight into how these phones perform. 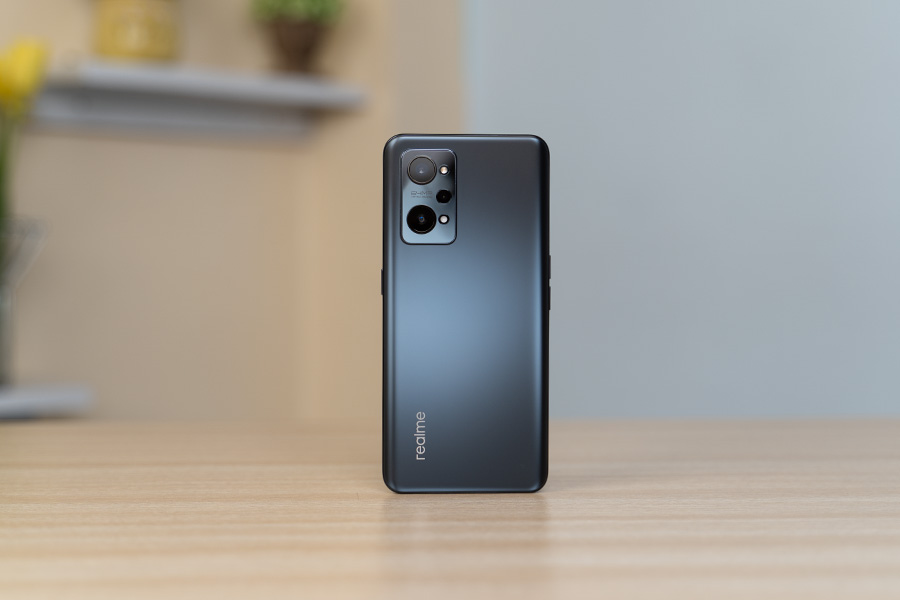 Okay, let’s talk about the GT Neo 2’s design first. And here, it definitely doesn’t bring all the bells and whistles as other entries in the Realme GT lineup in terms of looks. It brings a simple plastic back with a matte finish, which thankfully does not attract many fingerprints.

Honestly, this Neo Black color option that I am using looks a bit ordinary, so you might want to get your hands on the flashier green or blue color options instead. In terms of the hands-on feel, unlike most Realme phones, this one’s not as sleek and slim either.

There’s a definite heft to it, but it’s not uncomfortably heavy to use. However, if you prefer a more lightweight and compact form factor, I think you would like what the OnePlus Nord 2 offers. But do keep in mind that its compact form factor comes at the cost of a smaller battery.

Here, the GT Neo 2 brings a sizable 5,000mAh battery, which offered me a relatively better endurance than the OnePlus Nord 2 and the GT Master Edition. It usually gave a total of 7 to 7.5 hours of screen-on time with my typical “reviewer” usage pattern. Plus, charging this phone is pretty fast too with its proprietary 65 Watt Dart Charger. It takes around 40 minutes to fully juice up the phone from 0-100%, so I never had a battery-related issue during my time with this phone.

Realme has also included a Dolby Atmos-powered stereo speaker setup here which sounds quite good. I checked to see if they were as good as the OnePlus Nord 2, which you know has one of the best stereo outputs in this price segment, and found out that Nord 2’s audio still sounds slightly fuller and louder with crisp vocals.

Also, the Nord 2 comes with decent haptics whereas the one on the GT Neo 2 doesn’t feel as effective—although the company has advertised on offering a better haptic motor.

In any case, the Realme GT Neo 2 kills it in the display department. It has a 6.6 inch AMOLED screen with a 120Hz refresh rate and up to 600Hz touch sampling rate, which is almost twice the industry standard. With that, cruising through this display feels really smooth and fast, especially when playing fast-paced games. 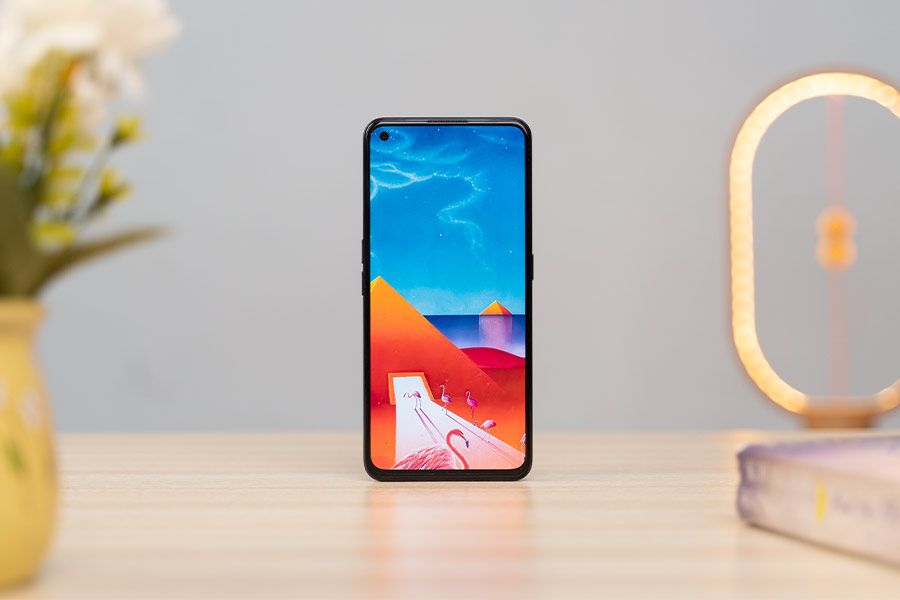 Plus, the core quality of this display is awesome as well. It’s a Samsung-made panel with first-grade color accuracy, contrast levels, and peak brightness. The trimmed bezels further elevate the viewing experience.

For protection, there’s the standard Gorilla Glass 5 here. And as always, Realme has not missed out on useful features like DC dimming either. For unlocking the phone, you get an optical fingerprint sensor embedded inside this AMOLED panel which is quite fast and accurate.

So overall, this display is definitely one of the best you can get in this price range. Furthermore, the performance is one of the many things I dearly love about this phone. It comes with Qualcomm’s Snapdragon 870 chipset, which is basically a re-branded Snapdragon 865+ from last year with a few tweaks.

But at the end of the day, it is still a powerful and much more capable chip than the Snapdragon 778G or Dimensity 1200—in terms of both raw performance and stability. Needless to say, the GT Neo 2 has given me very few things to complain about in this department.

To elaborate, let’s start with the gaming side of things. Demanding titles like Genshin Impact are well playable even in the highest settings and 60fps mode. Here, I was able to achieve around 53fps on average, whereas the phone was able to deliver 40-45fps even during combat, which is commendable. It slightly heats up after half an hour of gameplay, but the drop in frame rates after the heat up is not that significant, which is a huge plus for the gamers out there. Couple that with the instantaneous 600Hz touch response rate, you will certainly enjoy gaming on this thing.

Similarly, PUBG runs at 59fps on average with the graphics set to HDR and frame rate to extreme with basically no stutters at all. COD too achieves a similar 60fps count at the highest of settings, i.e. Very High graphics and Max frame rates.

And when you put it against the Dimensity 1200-AI-powered OnePlus Nord 2, you can immediately feel the superiority of the Snapdragon 870 in games like Genshin Impact where the Nord 2 only manages as high as 40fps in the highest settings and 60fps mode.

The only complaint that I have with the GT Neo 2’s performance is that it still doesn’t support higher fps games to run at 120fps despite the chipset being more than powerful to handle them. Games like Critical Ops, Oddmar, Bombsquad, etc, that offer a smoother 120fps gameplay are playable smoothly in their highest possible settings, but the phone caps out their fps to 60 at max. And it’s not just this phone, there’s no 120fps gameplay in any of Realme’s premium mid-range offerings either. So Realme, it’s a shame that you guys are offering such a good 120Hz display and powerful processors but the users are still not able to make the most out of them.

Besides that, normal day-to-day performance is unquestionably good on this phone. As expected from Realme UI, the transitions are polished and the touch response when navigating through the UI or scrolling through web pages is amazingly fast and smooth.

With 12GB of LPDDR5 RAM that my unit’s rocking—complemented by a faster UFS 3.1 storage protocol—multitasking and memory management has been no problem either. Overall, this device provides a superb experience in terms of performance while Realme UI 2.0 further adds to the charm. It is not that resource-heavy, while also bringing all the nifty customization options. As always, I only wish that the company didn’t include all these bloatware apps in a premium phone like this!

Although most of them are uninstallable, it does take away the “premium experience” to some extent. But the good news is, Realme has promised that the GT Neo 2 will be one of the first phones to get the Android 12-based Realme UI 3.0 update, which is rumored to arrive in December.

Moving on, many of you guys asked me on Twitter if this phone has a good camera performance and my answer is, if I had to rate it out of 10, I would give it a solid 7.5.

Here, the phone comes bearing a triple camera setup at the back consisting of a 64MP primary, an 8MP ultra-wide, and a 2MP macro sensor. Pretty basic stuff!

Anyway, as you can see from these samples, the images from its 64MP main camera come out pleasing with plenty of details, good dynamic range, and an obvious pop in colors. Most of the time, the punchiness isn’t bothersome but in some instances, it can look a bit overwhelming.

I compared it against the OnePlus Nord 2 and evidently, the Nord 2 brings a more natural color scheme, but with a hint of excessive contrast.

During the Tihar vacation, I tested these cameras under different circumstances and what I can say is that both of them are plenty reliable—it just boils down to personal preference.

Just like the normal daytime images, the ultra-wide shots are also punchier from the GT Neo 2. But here, I prefer that vibrancy over Nord 2’s slightly washed-out results.

However, portraits come out too saturated from the Neo 2. It is simply impossible to ignore the red tint on the subject’s skin here.

Nord 2’s photos also have an unnatural yellow tone going on as well, but they look much better than the overly-done colors from Realme. Subject focus and background look eerily similar though!

Getting to the nighttime images, they both look quite similar—except for the color difference.

However, night mode in the Realme GT Neo 2 manages to capture a bit more light than the Nord 2 and brightens the picture overall.

I was also expecting the Nord 2 to be comparatively sharper during low-light conditions because of its OIS-enabled primary camera, but that’s not the case.

The 2MP macro camera is nothing to get excited by as the close-up photos lack details, appear washed out, and are subpar overall.

As for selfies, Neo 2’s 16MP front camera delivers good photos. Although there is a slight smoothening going on, I found that it has better contrast and skin tone than the Nord 2.

The only thing I wish this camera did better is color processing on human skin, which I hope Realme brings forth via an update pretty soon!

Similarly, I am quite impressed with the video capabilities of the GT Neo 2. The Gyro EIS works well to maintain decent stabilization at 4k 30fps—as well as—1080p 60 and 30fps videos. It can shoot at 4k 60fps as well which is a plus, but there’s no stabilization here. Still, if you use a gimbal, this phone can take pretty nice 4K 60fps footages.

To sum up this review, the Realme GT Neo 2 is a pretty well-balanced phone. It offers something for everyone… it has a flagship-level performance, fairly reliable cameras, hands-down one of the best displays in its price range, and a good set of stereo speakers for those who are into content consumption.

The only thing that’s missing with this phone—at least for me—is maybe a better design. I would have liked for Realme to take the design inspiration from the GT Master Explorer Edition, which has one of the best designs on a smartphone thanks to its curved display, a more premium glass back, and metal frames.

Plus, if Realme had offered the 50MP sensor from the Explorer Edition here, I think Neo 2’s cameras would have been even better. And as things stand, its camera is still inferior to that of the iQOO 7 and Galaxy A52s. So, the GT Neo 2 shouldn’t be your first choice, if cameras are your topmost priority.