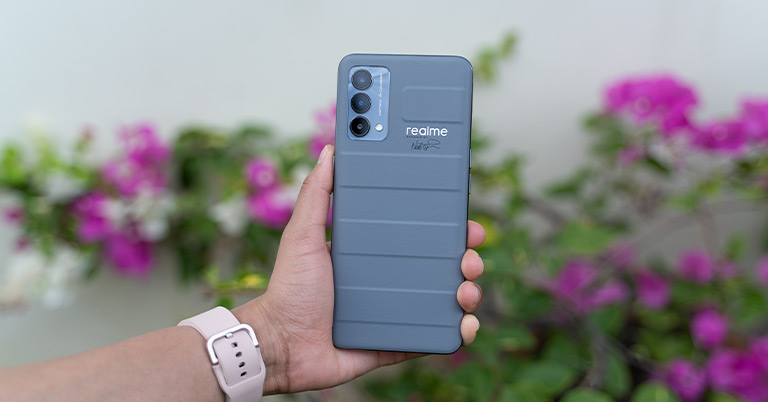 Sadly, the GT Master Explorer Edition isn’t launching in Nepal, India, and other South Asian markets. Anyway, the Realme GT Master Edition, or GT ME in short, delivers an excellent value for money. For me, it is almost a perfect mid-range phone in 2021, although there are some caveats which I will talk about later in this review.

Here, the first thing that Realme has learned from its previous mistakes can be seen on the design front. The company’s recent couple of launches like the X7 Max and X7 Pro had this bizarre design choice, which naturally received a lot of valid criticism.

However, that complaint is gone for good with the GT ME since this phone adopts a new, unique-looking design that feels refreshing and definitely something I like. For this, Realme collaborated with Japanese designer Naoto Fukasawa to make something they call a “suitcase” design.

Looks aside, I’m quite fond of the feel of this vegan leather as well, while the horizontal grid pattern provides me with a nice grip. It doesn’t gather any dust or smudges either, so I’ve used it without a case so far. But sadly, it did catch some scribbles that don’t go away easily.

So yeah, it’s always safer to use a case and Realme has provided one inside the box. Even the case embodies the aforementioned suitcase design so that the phone’s texture isn’t quite lost when putting it on. And of course, it is much better than the generic transparent case that we usually get on phones these days. If the suitcase approach isn’t quite up to your taste, there’s also a Luna White version of the GT ME with a standard glossy glass-like finish.

I also admire Realme’s signature form factor which is lighter and compact than most mid-range phones you could find right now. Not to mention, they have also retained the 3.5mm headphone jack, which I think is a perfect example of companies taking feedback seriously from their community. In this case, the Realme Community.

Moving on to the display, in 2021, it has pretty much become a norm for premium mid-range phones to feature quite a stellar display. And the GT ME is no exception. I found its screen quality to be almost identical to the one from the Realme X7 Max—maybe even better.

You’re getting a familiar 6.43-inch 1080p AMOLED display with a smooth 120Hz refresh rate and up to 360Hz touch sampling rate. During my usage, I’ve been quite pleased with the overall quality of the panel.

Although it’s not as color-accurate as the ones on significantly more expensive flagship phones, this one still offers punchy colors with excellent contrast and brightness levels. And thanks to the 360Hz touch sampling rate, the touch response is excellent as well. During my usage, I’ve thoroughly enjoyed the fluidity while typing or playing games on this thing. Plus, the onboard in-display fingerprint sensor is quite responsive too. Because of the phone’s compact form factor, the position of the sensor is also spot-on for my hand. Still and all, the vibration feedback isn’t that great and is strictly okay-ish for the price. So yes, this is definitely one area where Realme can improve upon.

As for the performance, with the combination of Snapdragon 778G and a 120Hz refresh rate, everything is smooth on the GT ME: from UI transitions to using any apps like Chrome or Instagram. Furthermore, Realme has optimized this chipset and its UI ridiculously well.

So much so that you don’t feel that big of a difference between say, this phone and a Snapdragon 888-powered device like the Realme GT. Just goes on to show how much Qualcomm’s midrange Snapdragon 700-series chipsets have evolved and are impressively closing the gap over the flagship Snapdragon 800 lineup. So, if you are a light-to-moderate user who mostly uses Instagram, WhatsApp, Chrome, such kinds of apps, practically, you should have the same user experience on the GT ME as the more expensive phones.

Additionally, GT ME doesn’t tend to get warm or overheat when using light apps either—while that’s not the case with Snapdragon 800-series or MediaTek’s Dimensity 1200-powered smartphones.

However, the one key area where the GT ME lags behind is when playing extremely demanding games. Here, pushing Genshin Impact to the highest of settings results in frequent stutters and overheating after just 5 minutes into the game. On the contrary, you will get comparatively better performance from Dimensity 1200 or Snapdragon 870 powered phones. 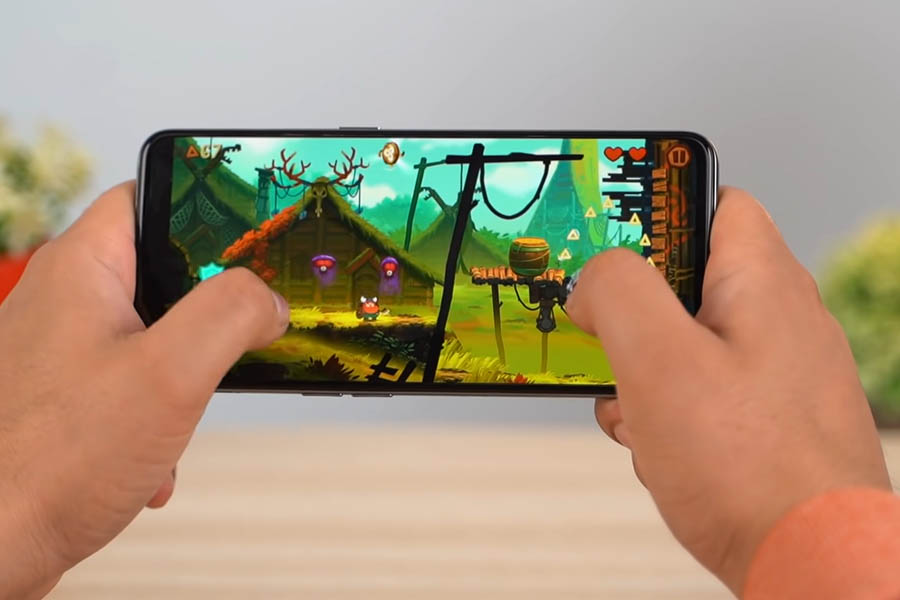 Other games like PUBG Mobile and COD run fairly smoothly though, and the phone doesn’t heat up that bad either. You can achieve 40fps in PUBG mobile under HDR Graphics and Ultra frame rates, with 100% stability. Setting the graphics to Smooth and frame rates to Extreme gets you smoother 60fps gameplay as well.

COD, which is another graphics-intensive yet optimized game, can hit 60fps under High graphics and Max frame rates as well. Sadly, 120fps titles like Critical Ops, Oddmar, and Mortal Kombat cap out at 60fps. But according to Realme, they’ve vouched to bring 120fps mode on these games pretty soon including a high refresh rate option in PUBG Mobile.

One of the reasons why I said the Realme GT ME might just be a perfect midrange phone is because of its impressive camera performance.

Here, I like the images from its primary camera during daylight. Compared to the OnePlus Nord 2, it has better details and pleasing punchy colors. So most of the time, you will find Realme GT ME doing a better job here.

Still, being a mid-range phone, it does struggle to take close-up shots better as it doesn’t have a shallow depth of field. At times, you will notice the camera struggling to lock in focus as well.

Nonetheless, portraits are much, much better on the Realme GT ME. Maybe even the best in its class. As you can see, it has superior highlight control and shadow processing alongside better skin tone.

It also maintains the exposure and the background color better. Hence, the GT ME is a clear winner on this front.

Selfies are equally good from this phone too. I like the warm skin tone it produces, whereas the details and colors look equally nice too.

Here, its 8MP ultra-wide-angle sensor isn’t extraordinary, although decent for the price. Its images have a slight color shift with a warmer tone and subpar details.

But if there is ample light, the photos come up usable.

Now, what’s average about the GT ME is its nighttime shots and videography capabilities. As you can see, the nighttime images from the GT ME introduce a lot of noise and have a soft, not-so-pleasing output.

On the contrary, the OnePlus Nord 2 shoots photos with better low-light performance in the normal mode.

Turning on night mode, once again, the Nord 2 maintains better exposure and details most of the time, while the Realme GT ME is not that far behind—while being slightly inconsistent.

In terms of videography, you can record upto 4K 30fps footage with gyro-EIS from this phone. However, the stabilization isn’t great in 4K 30fps and 1080p 60fps mode, while there’s a noticeable wobble if your hands aren’t that still. To compare, Nord 2’s videos come out much steadier. So, I had to dial down the setting to 1080p 30fps to get better stabilization.

You can also shoot videos from the ultra-wide-angle lens at 1080p resolution with fairly decent stabilization. Selfie videos cap out at 1080p 30fps and you can get pretty steady results with “Super Steady Mode” turned on—although it does come at an expense of a narrower field of view.

Another aspect where the Realme GT Master Edition does a pretty good job is the battery endurance. Realme is one of those brands that does not usually include a big battery in favor of a lighter and slim form factor. To no one’s surprise, Realme has opted for a relatively smaller 4500mAh cell here. 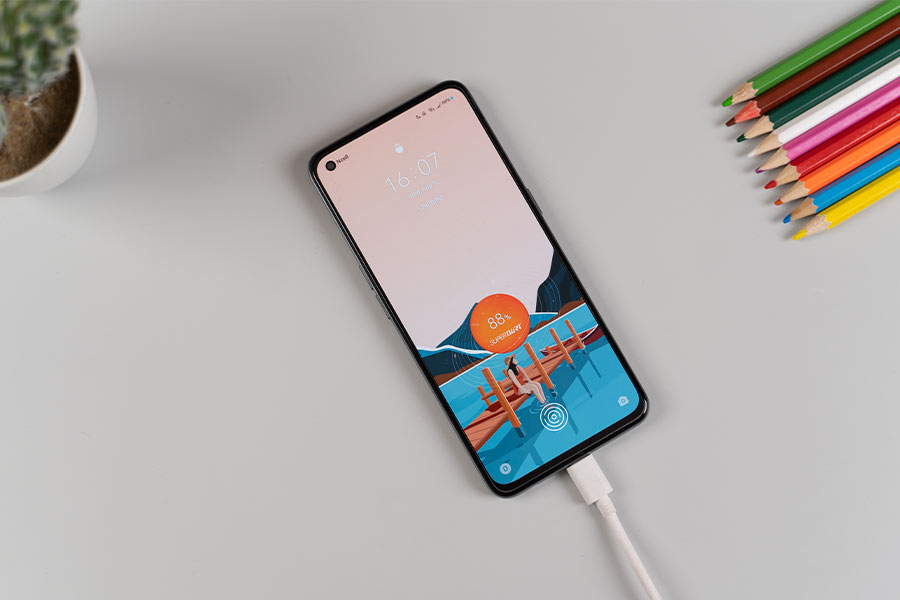 Its battery life isn’t spectacular but if you are a moderate user, it should last you through the day. But since I am a relatively heavy user, I had to charge the battery as soon as I’d get home by night. Nevertheless, it’s not that big a-deal since Realme’s proprietary 65W Type-A to Type-C charger only takes about 30 minutes to go from 0 to 100%.

Although someone like us with the technical know-how will be able to uninstall such apps or block their notification pretty easily, such notifications could be incredibly frustrating to someone like your grandparents or anyone with little to zero idea about the cause of such nuisances.

Another aspect where the Realme GT ME sees an unnecessary compromise is in the speaker front. You only get a single speaker here while smartphones from practically every other company at this price range come with dual speakers. Even though this audio setup is decently loud with good clarity, I’ve dearly missed the immersive audio experience that we get from phones with dual speakers

Regardless, despite some of its obvious flaws, if you look at what the Realme GT Master Edition offers for the price, overall, it is without a doubt an incredibly promising and well-balanced offering.

Still, one crucial thing you might wanna consider is that the Realme X7 Max, which is quite similar to the GT ME, actually delivers better raw performance, is usually available for INR 25,000 every now and then.

So you might want to get that instead and save some cash. However, if you prefer a unique-looking design, you should definitely cash in extra for the GT ME. Plus, with Realme axing the “X” series, the X7 Max might not be in stock for very long either.