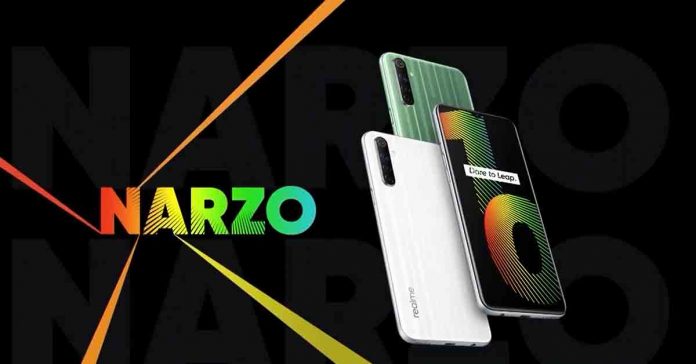 Realme has been creating a lot of hype around its new Narzo series in India. Though the brand was all geared up with the launch, it had to postpone the launch event, not just once but twice due to the ongoing coronavirus crisis. Finally, Realme has dropped the Narzo 10 and Narzo 10A in India. However, it seems the Narzo 10 and 10A are indeed the same Realme 6 and Realme C3 global variants with just a different badge at the back. Anyways, let’s take a detailed look at the specs and features of Realme Narzo 10, along with its expected price in Nepal.

Realme Narzo 10 features an IPS LCD screen with a diagonal length of 6.5-inch. It has a water-drop style notch on the top center to house the front camera. The bezel on the bottom of the screen is quite evident as compared to the rest of the sides. Realme claims a screen to body ratio of 89.8% on this smartphone. On the back, we get to see what the company calls the Master Design. The plastic panel has several vertical lines that run from top to bottom. The credit for this specific design goes to Naoto Fukasawa, a Japanese industrial designer who claims the design emphasizes the relation between the product, its user, and the surrounding environment.

Helio G80 consists of two powerful Cortex-A75 cores clocked at 2.0 GHz and six low energy Cortex-A55 cores clocked at 1.8GHz. Helio G80 isn’t as powerful as G90T, and its closest competitors would be Snapdragon 665. As for memory, it comes with 4GB of RAM that is paired with 128GB of internal storage.

The Narzo 10 flaunts a quad-camera setup on the back. The four cameras are arranged in a vertical line at the top left side of the rear panel. The 48MP AI primary camera is accompanied by an 8MP ultra-wide-angle camera, a 2MP monochrome portrait sensor, and a 2MP macro sensor. An LED flash resides on the right side of the pill-shaped camera module. There is a 16MP sensor on the front with an aperture of f/2.0. Realme Narzo 10 gets its juice from the massive 5,000mAh battery. Fortunately, it comes with support for the 18W Quick charge through the USB Type-C port. There is a capacitive fingerprint sensor mounted on the rear panel for biometrics—the phone ships with Android 10 with Realme UI on the top. As it stands, Realme Narzo looks to the new budget lineup from the company for India only. Instead of launching the Realme 6i, they have launched a completely new series. Hence, the Narzo 10 is an upgrade to Realme 5i. That being said, it is a cheaper alternative to Realme 6, which carries better specs at a slightly higher price. We will have to see if it can compete against the likes of Redmi Note 9 and other devices from rival brands.

Check out our long-term review of Realme 6: