Home Realme Realme Narzo 10A unveiled: Will launch as Realme C3 in Nepal 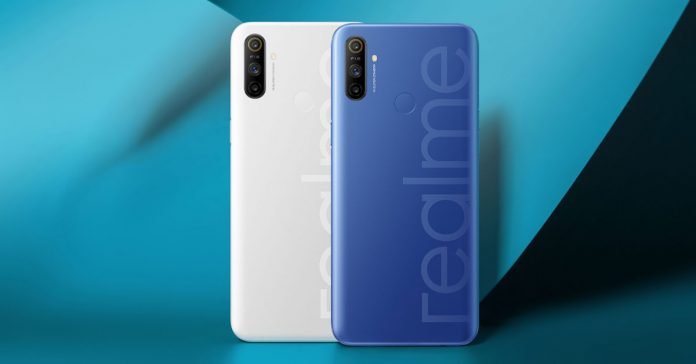 Realme Narzo 10A features a 6.5-inch In-cell LCD screen. The display has a mini-drop screen which the company claims is smaller than the dew-drop notch on other similarly priced devices. The device comes with a screen to body ratio of 89.8% and an aspect ratio of 20:9. It comes with an Eye-Protection feature that will reduce eye strains. As far as back design is concerned, Realme has taken a bold step by including Realme’s “big and iconic logo“. The back panel features Radium logo texture, which the company claims is both scratch and fingerprint resistant. The device does stand out with the reflective textured finish; however, it is yet to be seen how users will respond to the big and iconic logo.

Powering the device is MediaTek Helio G70 which is an octa-core processor based on the 12nm production process. It is the best budget gaming chipset available on the market today. The device comes with 3GB of RAM and 32GB of storage onboard.

For a budget device, Realme Narzo 10A can support PUBG in High graphics out of the box. And if Realme C3‘s performance is any indication, the gaming experience in the Narzo 10A won’t be disappointing. Realme claims that the device can outperform the Redmi Note 8, which is equipped with Snapdragon 665.

Realme Narzo 10A flaunts 12MP triple camera setup on the back. The 12MP primary camera has an aperture of f/1.8 and is equipped with PDAF. Similarly, it also has a portrait lens with an aperture of f/2.4 and a 4cm macro lens. All the lenses are enclosed inside a pill-shaped camera module. An LED flash is on the side of the camera module. The rear camera setup supports HDR, 4X zoom, Slo-mo video, and video recording ar 1080P. On the front, there is a 5MP (f/2.4) selfie camera with AI beautification. Realme Narzo 10A comes with a 5,000mAh battery which boasts a standby time of up to 30 days. The device also supports reverse charging. For biometrics, it has a capacitive fingerprint sensor mounted on the back, which can unlock the device in just 0.27s. It also has a face unlock feature. Realme has launched the Narzo 10A in India where its price is INR 8,499 for the 3/32GB variant. We expect Realme Narzo 10A to launch as Realme C3 global variant at a price of around Rs.16,000. The Nepali variant will differ in design as it features sunlight design in contrast to Narzo 10A’s big and iconic design.

Check out our video review of Realme C3: