Home Samsung Samsung Galaxy A50, A30 and A10 full specifications leaks online 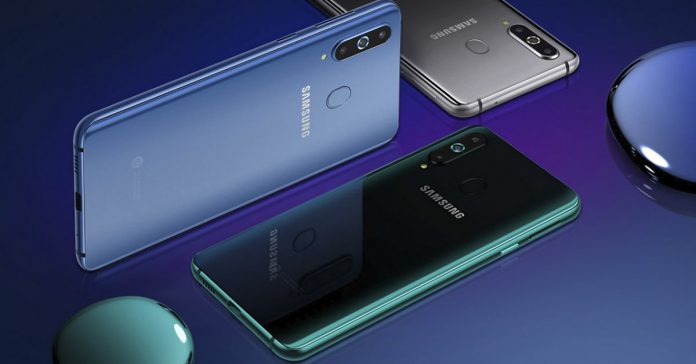 After making a mark with their M-series, it’s now time for the 2019 edition of their Galaxy A-series to shine. With rumors of over nine smartphones based on the A-series, Samsung looks aggressive. The company is said to launch one smartphone every month, starting from March till June. This means we will see a total of three phones, likely the A10, A30, and the A50, while the rest will be revealed at a later date.

According to a Samsung representative, pricing will start at $141 and will climb to a maximum of $703. The list will start from the entry-level Galaxy A10 to the premium Galaxy A90. Other than that, very few details of the smartphone have been outed by the company up till now. The same representative did add Samsung’s expected sales of over $4 billion in 2019 from only the A-series. The Galaxy A10 is the entry-level smartphone in its series and gets a 6.2-inch infinity-V display with an HD+ resolution. It will run on an octa-core Exynos 7884B clocked at 1.6GHz. The chipset is paired with 3GB of RAM and 32GB of internal storage. The back gets a 13MP f/1.9 single camera set up while the front will house a 5MP f/2.0 unit.

Powering the device is a 4000mAh battery. A micro USB port is in-charge of charging and there is no fast charging support. Also, the phone lacks a fingerprint sensor. Color options include Black and Gold, while the back is made up of Glossy Plastic. Pricing is expected to be around Rs 10,990 and is expected to go official sometime in the month of March.

The Galaxy A30 gets a 3D glossy plastic design, a 6.4″ FHD+ Super AMOLED panel and an Infinity U notch. Powered by an Exynos 7904 SoC, the phone will come in either 3/32GB or 4/64GB variants. The storage is expandable via MicroSD card of up to 512GB. This one also features a 4000mAh battery, but with a USB-C port and fast charging support.

The back gets a 16MP f/1.9 main lens alongside a 5MP f/2.2 ultrawide sensor at the back, while the front only has a 16MP f/1.9 lens. Color options include Black, White, and Blue. The device will also come with Samsung’s Bixby Assistant, Samsung Pay, Pixel merging, and a bunch of other features the A10 misses out on.

The Galaxy A50 shares the same display, design, extra features, color options and battery setup as the A30. The differences start with the SoC, given a more powerful Exynos 9610 chipset. An Octa-Core processor clocked at 2.3GHz paired to either 4/64GB or 6/128GB setup. Cameras also receive an improvement, with a 25MP f/1.7 main lens aided by a 5MP f/2.2 depth sensor and an 8MP f/2.4 ultrawide. At the front, a 25MP f/2.0 sensor takes care of the selfies.