Samsung announced the Galaxy A51 5G alongside the Galaxy A71 5G earlier this year. Though the former is yet to make a commercial debut, Samsung is already working on its ‘s’ iteration. The upcoming Samsung Galaxy A51s 5G has been spotted in multiple benchmark and certification listings. Read along to learn more about the rumors, leaks, specs, expected launch & availability of Samsung Galaxy A51s 5G.

In the latter half of last year, we saw Samsung launch ‘s’ iteration of devices under A-series and M-series lineup. Though the s-suffixed devices were meant to upgrade to their non-s siblings, the minor changes weren’t convincing enough. It has been reported that Samsung will be following the same strategy for at least 2021.

Samsung A51s 5G looks to be the first s-suffixed smartphone for 2020. The device with the model name SM-A515V has received approval from Wi-Fi Alliance and has already gone through Geekebench benchmark tests.

Unlike A51 5G, Samsung has turned to Qualcomm for the A51 5G’s processor. The Galaxy A51 5G was announced with Samsung’s in-house Exynos 980 SoC. The Geekbench listing revealed the chips inside the Galaxy A51 to be “lito”. Lito is the codename for Snapdragon 765G. The chipset features an integrated modem for 5G connectivity.

It supports both sub-6Hz and mmWave 5G. The listing also reveals 6GB of RAM in the tested device. But we can expect another variant with 8GB of RAM. Like the A51 5G, both variants are likely to feature 128GB of internal storage with the option to expand it via a microSD card. 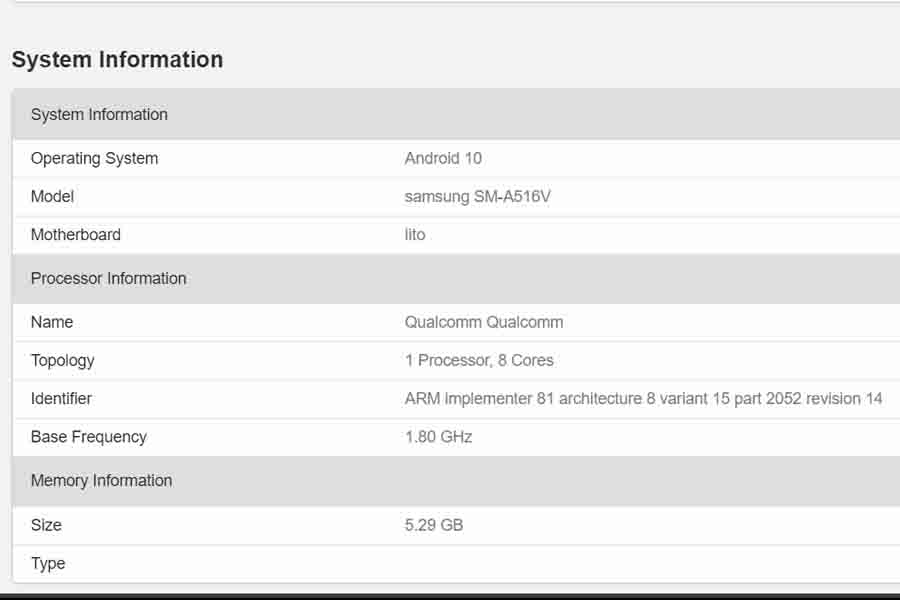 Similarly, Wi-Fi certifications from Wi-Fi Alliance reveals that the device will support Wi-Fi a/b/g/n/ac (2.4 GHz, 5GHz). It will run on Android 10 with the One UI on top. Samsung Galaxy A51s 5G will first land in the US. We will have to wait for Samsung’s official announcement for complete specs, pricing, and availability in other regions.

Check out our in-depth review of Samsung Galaxy A51!