After the Huawei P20 Pro made sensations with its triple cameras, we have come across another smartphone with triple rear camera sensors, but this isn’t a Huawei device. This time, it’s Samsung! Samsung recently launched the Samsung Galaxy A7 2018, which among other things seems to provide features that even flagship smartphones don’t give. Well, this seems like a new strategy for standing out in the market in the upper mid-range segment.

The Samsung Galaxy A7 2018 features a 6-inch  FHD+ Super AMOLED display. Keeping up with the trend, the device offers you a slightly curved front with the side frame being made of aluminum. The phones comes in three memory variants, 4 GB/ 64 GB, 4 GB/ 128 GB or 6 GB/ 128 GB variant. 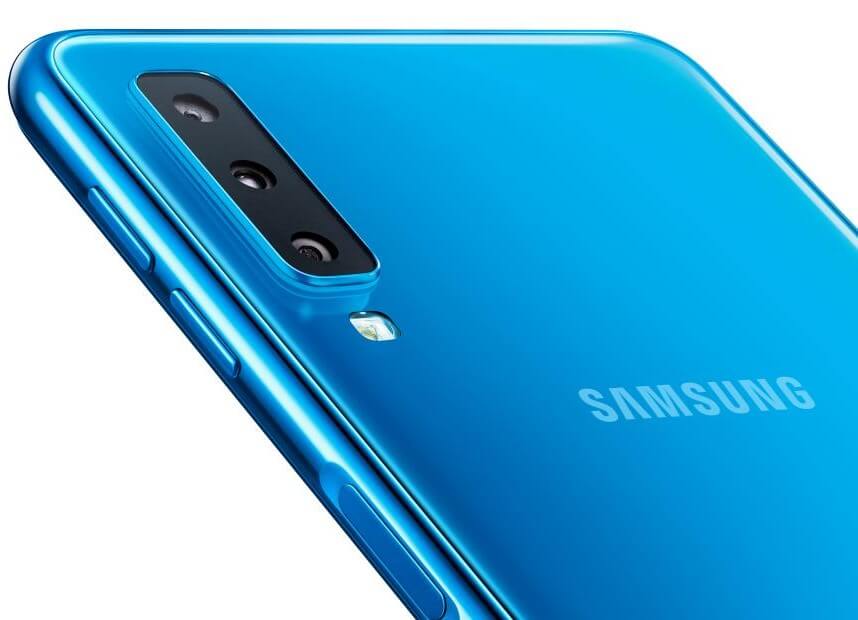 The star of the show still remains the triple camera setup. Samsung phones are always praised to give good cameras to consumers and with the triple camera setup definitely sets the standard and expectations high. At the back, there is a 24 MP primary sensor with f/1.7 aperture, an 8 MP f/2.4 aperture wide- angle lens and a 5 MP f/2.2 depth sensor. Similarly, the front features a 24 MP f/2.0 sensor for selfies.

Adding to the features, there’s a side-mounted fingerprint sensor just like what we saw on the Galaxy J6 Plus. Likewise, it also comes with Dolby Atmos for headphones and audio.

The Galaxy A7 comes at an international pricing of €350 ($410). As it is with all Samsung phones, the price is expected to be consistent with the international pricing. Similarly, the device is said to launch between this Dashain and Tihar, according to Samsung Officials.

As of now the smartphone lineup in Galaxy A series comprises of Galaxy A6 Plus, A6, A8 Star, and A8 Plus 2018. Similarly, the mid-range segment consists of J- series smartphones, the latest among those is, Galaxy J7 Duo, J8, J7 Pro, etc.