Samsung has launched its latest F-series phone in India. The newly announced F04 is an entry-level largely based on the M04 launched last month. In this article, we will discuss the specs, features, expected price, and availability of the Samsung Galaxy F04 in Nepal.

Samsung has built the Galaxy F04 around the 6.5-inch LCD screen. It is an HD+ panel with a waterdrop notch on top for the selfie camera. Since it’s a budget smartphone, it refreshes at the standard 60Hz and comes with noticeable bezels.

F04 has a textured back with two circular cutouts for the dual camera setup. Samsung calls it the “Gloss” design and it is available in two colors: Jade Purple and Opal Green. The main body is made of plastic and it is 9.1mm thick and weighs around 188 grams. 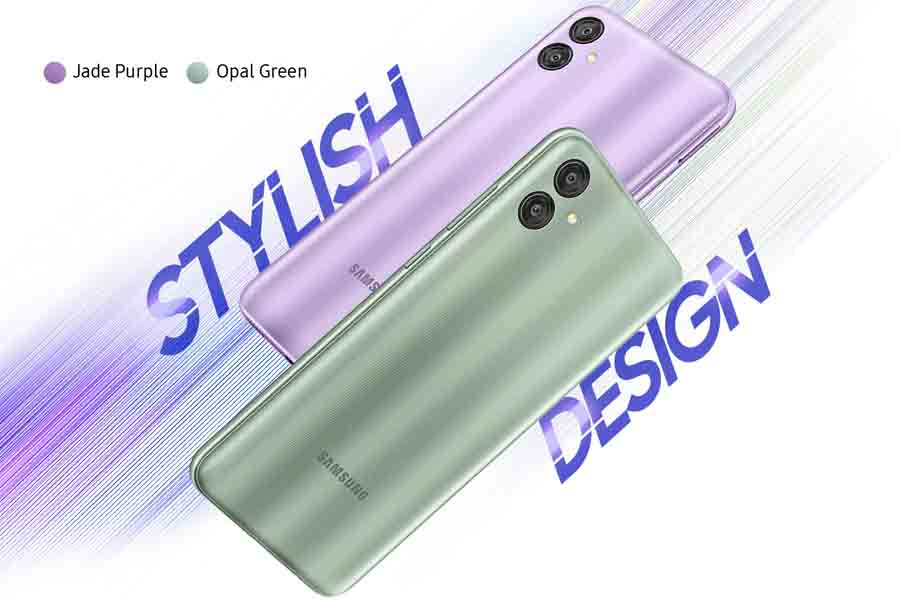 Samsung Galaxy F04 packs the MediaTek Helio P35. It is a 12nm octa-core processor announced back in 2018. Thus, it won’t be of much help for anything but normal day-to-day tasks. The phone comes with 4GB of RAM and 64GB of internal storage. Users can double the RAM using the virtual RAM feature. In addition, there is an option to expand the storage up to 1TB using a MicroSD card.

The dual-camera setup at the back of the Galaxy F04 is led by a 13MP primary sensor. Accompanying it is a 2MP depth sensor and a LED flash. There are options to shoot hyper-lapse videos, panoramas, and portraits inside the default camera app. Likewise, users get a 5MP sensor with an f/2.2 aperture for selfies and video calls.

Samsung Galaxy F04 gets its juice from a 5,000mAh battery. It has support for 15W charging via the Type-C port. The phone ships with Android 12 out of the box and Samsung has promised at least two years of Android updates. The Galaxy F04 is priced at INR 7,499 (including the bank discounts) and will go on sale through Flipkart India from January 12. If it launches here, we expect the price of Samsung Galaxy F04 in Nepal to start at NPR 13,499.