Home Samsung Samsung Galaxy J7 2016 Launched in Nepal for a Price of ... 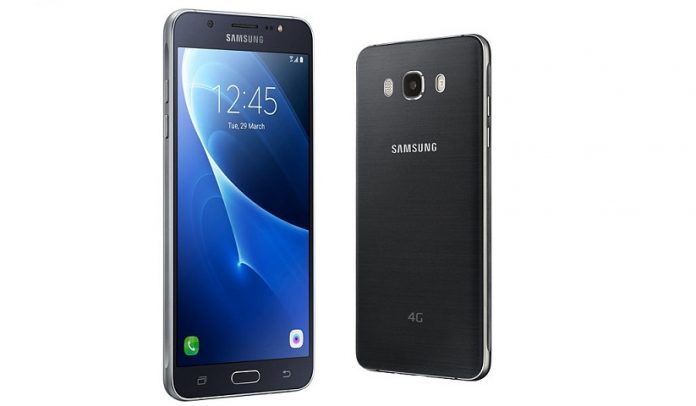 After successfully launching the Galaxy J5 2016, Samsung Electronics Nepal has also launched the Galaxy J7 2016 for a price of Rs. 27,990. You can grab the phone from various Samsung mobile outlets located all over the country.

The Samsung Galaxy J7 2016 offers a bigger 5.5-inch Super AMOLED display when compared to the 5.2-inch of Galaxy J5, however, the resolution remains the same at 720 x 1280 pixels. The phone is powered by an Exynos Octa 7870 CPU that comes equipped with a total of eight Cortex-A53 cores clocked at up to 1.6Ghz. The Exynos Octa 7870 is the first midrange system on a chip (SoC) to feature 14nm FinFET process which means it is more power efficient than the traditional 28nm SoCs. Moreover, with octacore processor, the Galaxy J7 2016 is twice as fast as the 1.2Ghz quad-core fueling Galaxy J5 2016.

In terms of memory, the Galaxy J7 2016 has 2GB of DDR3 RAM and 16GB of onboard storage which can be further expanded via dedicated microSD card slot upto 128GB. Just like the Galaxy J5, the Galaxy J7 also boasts a 13MP autofocus rear camera with LED flash and f/1.9 aperture lens, while the front houses a 5MP shooter with LED flash and 120-degree wide-angle lens. The phone runs on the latest version of Android — Marshmallow 6.0 with Samsung skinned TouchWiz UI.

In terms of connectivity, the Galaxy J7 2016 supports dual SIM slots with 4G LTE, WiFi b/g/n, and GPS. The phone is made up of plastic with the faux metal frame. The back is removable giving access to a 3300mAh user replaceable battery. The phone weighs 170gms and measures 151.7 x 76 x 7.8mm in dimension. Like the recently launched Galaxy J3 and Galaxy J5, the Galaxy J5 also comes with S Bike mode which when enabled while riding your bike automatically replies to calls with pre-recorded messages without notifying the rider and only get notified about important contacts which is a pretty neat safety feature.

Although the Samsung Galaxy J7 2016 is an upgrade over last year’s Galaxy J7, but for a price of Rs. 27,990 it raises some questions to be answered. The phone goes head to head with recently launched OnePlus X (Rs.28,999) and Redmi Note 3 (Rs.24,999), and it’s a shame to tell that the Galaxy J7 falls behind those two in almost every way.

While the OnePlus X comes with a beautifully crafted glass body and the Redmi Note 3 featuring a full metal jacket, the Galaxy J7 2016 offers the same outdated plastic build. Moreover both the OnePlus X and Redmi Note 3 provides full HD display, but Samsung for some reason still thinks 720P display is good enough in the age where almost every 25K phones come with a 1080P panel.

Another big disappointment of the Galaxy J7 2016 is the lack of important sensors like the fingerprint scanner, secondary noise-cancelling microphone, compass, gyro sensor, and auto brightness sensor. Talking about the performance, having used the phone for an hour or so, the Samsung Galaxy J7 didn’t feel as smooth and fluid like the OnePlus X and the Redmi Note 3. Apart from having a 14nm processor, the Galaxy J7 is nowhere near the Snapdragon 801 powered OnePlus X or the Snapdragon 650 powered Redmi Note 3.

What’s good about the Galaxy J7 2016 are the camera and battery life; areas where Samsung does ever so well each year. With the increasing dominance of Chinese smartphone brand, what bothers me a lot is why Samsung is refusing to accept the market trends. So, what do you think about the Galaxy J7 2016? Leave your opinion in the comment section below.