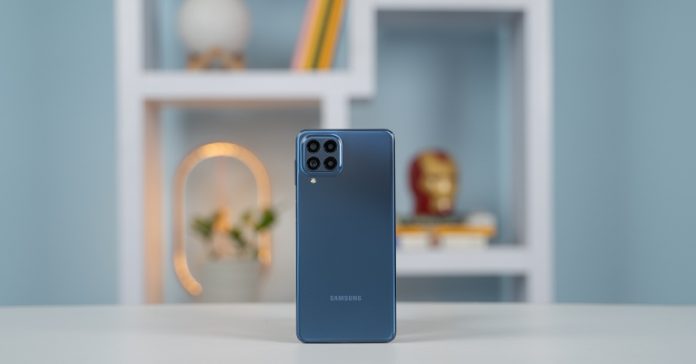 If you were to ask what’s my favorite mid-range phone right now, my answer would be the Realme 9 Pro+. It’s just such a well-rounded smartphone that I’m comfortable recommending it to most people even to this day. And challenging the 9 Pro+, Samsung recently launched the Galaxy M53 in India and a few European markets, which I’ve been using for almost a month for this review.

Starting with the design, nothing has changed here from last year’s Galaxy M52 in terms of form factor. So yeah, this is quite a big phone, and one-handed usage is certainly a bit of a struggle here for someone with small hands like me. But despite the large size, Samsung has delivered quite a slim and lightweight build quality. 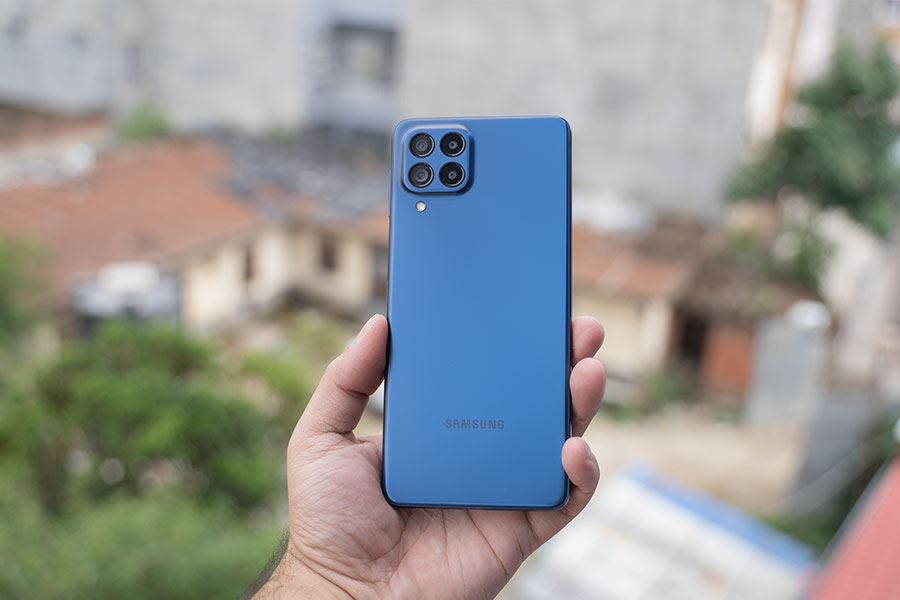 Then again, I do miss that heft on the M53 that I’ve come to expect from such a big phone.

Also, being an M series phone, its design and color options aren’t particularly attractive either. The matte finish at the back is a nice touch but besides that, the M53’s design does nothing to me. When putting it next to the similarly priced Galaxy A33, I’m pretty sure most people will prefer the overall aesthetics of the A33 instead. Not to forget, the M53 is also missing any form of IP rating, unlike the A33 which comes with IP67 dust and water resistance. So, I do think that given the price of the phone, Samsung could have done some tweaks to make the M53 a little more attractive here.

As for the display, we all know that Samsung makes some of the best smartphone displays out there. And this 6.7” Super AMOLED Plus screen is no exception.

Its default color calibration does lean a bit on the warm side but there’s a temperature slider in the settings, so this is no biggie. That pristine AMOLED experience we expect from Samsung is alive and well here. And it’s definitely a better panel than the one you get on the OnePlus Nord CE 2 and the Realme 9 Pro+. 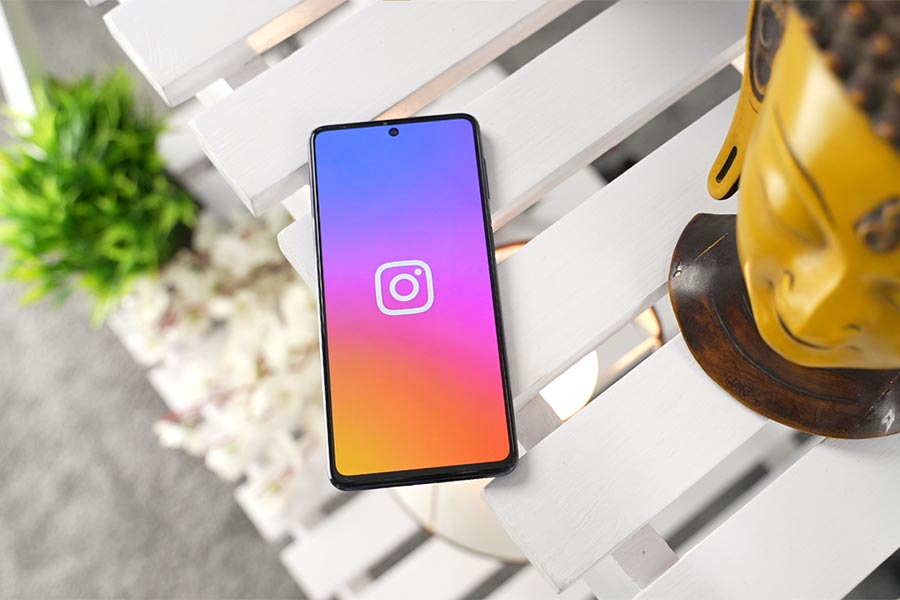 I’m also happy with its brightness levels and auto-brightness adjustment, and the phone handles the 120Hz refresh rate just fine without micro-stutters and lags or anything. There’s Widevine L1 certification for high-res streaming as well, so binging the latest episodes of Stranger Things looks first class here. Support for HDR playback would’ve been just the cherry on top but I don’t think that’s going to be a dealbreaker to many.

Having said that, the Galaxy M53 doesn’t earn full points in the media consumption department since Samsung has gone with the same old mono speaker this time. Although it gets loud enough and there’s no distortion in sound quality even at max volume, a stereo speaker is really not a big ask on a phone that costs above INR 20,000. 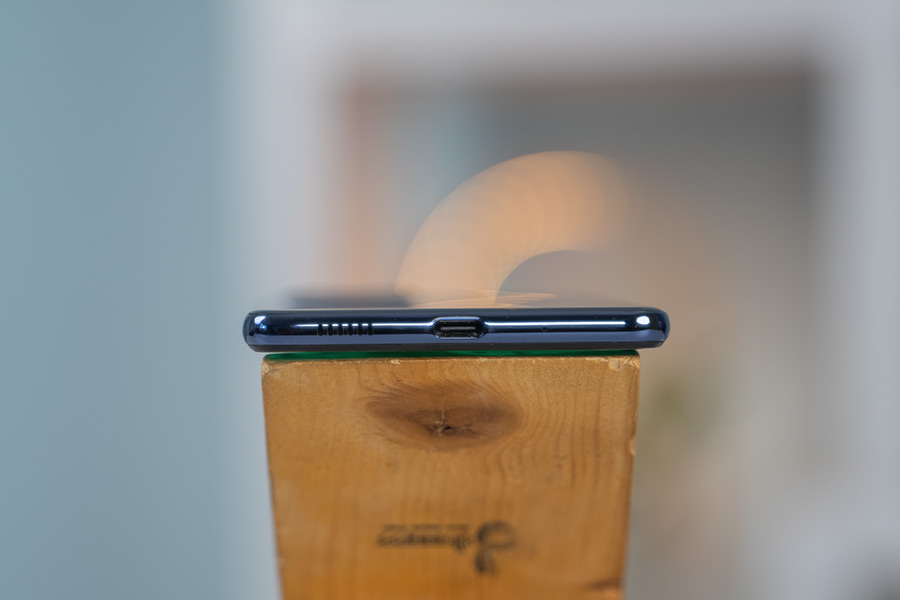 Plus, I think, the haptics and touch sampling rate also could’ve been somewhat better here. As things stand, the typing experience on the Galaxy M53 is simply not as enjoyable as on the Realme 9 Pro+. The proximity sensor, Carrier Aggregation, and VoLTE call, however, work flawlessly here, so that’s good.

Ok, let’s talk about performance now. And in this aspect too, I don’t see improvements over last year’s M52 here.

That’s because compared to Snapdragon 778G on its predecessor, the Dimensity 900 powering this phone is relatively under-powerful. And under-optimized as well. Be it in terms of CPU, GPU, or overall performance, the Galaxy M53 is marginally behind its predecessor and even the Dimensity 920-powered Realme 9 Pro+ for that matter.

But does that make any difference in day-to-day usage? Absolutely not, as it turns out. The M53 handles everything from loading up apps to keeping them in memory perfectly fine. I also ran my usual multitasking and speed test, and… the results speak for themselves: It is still chasing the 9 Pro+ by some margin but that’s solely because of One UI 4’s rather heavy animation scale—which is something you can easily dial down under the Developer Options, by the way.

Talking about One UI, it still remains one of my favorite Android skins out there. But unlike the Galaxy A33 which is guaranteed to receive 3 or 4 years of OS updates (depending on the region), the M53 will only be getting 2 generations of updates. That means it will be updated to Android 14 only. The bloatware situation is also quite upsetting here as it loads with a bunch of third-party and Samsung apps. Even the default lock screen wallpaper service here is Glance! Yeah, you can uninstall most of the unwanted apps and customize the lockscreen the way you want, but all this is certainly not the clean software people expect from Samsung.

Ok, what about gaming on the Galaxy M53? Well, that’s where the Dimensity 900 fails to keep score against the excellence of the Snapdragon 778G. 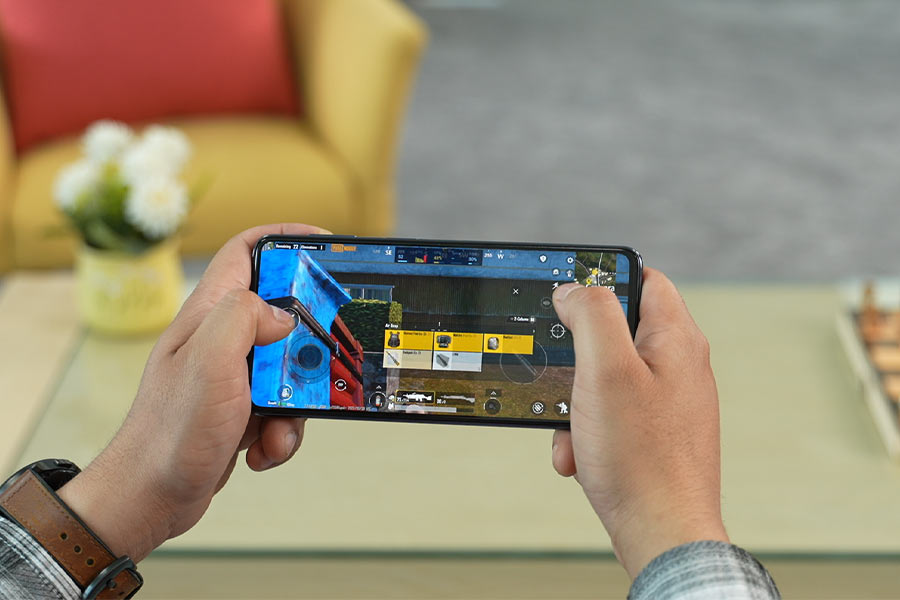 For instance, the Galaxy M52 delivers smooth 60 fps on Call of Duty at High graphics & Max frame rates, whereas you’ll have to bring down the graphics to “Low” on the M53 and Realme 9 Pro+ for similar results. Apart from that, these two phones’ gaming performance is pretty similar. PUBG and Genshin Impact render similar gameplay at all settings as well.

And I’m especially impressed with the thermals on the Galaxy M53.

Samsung doesn’t usually do passive cooling on its phones but this one is a rare exception since it has a vapor cooling chamber inside. And based on our findings, it’s clear that this cooling system works just fine to keep the Dimensity 900 nice and cool at all times. On top of this, the M53 has an upper hand over the Realme 9 Pro+ if you play a lot of high-fps-ready games as well. Here, Samsung has optimized titles like Injustice 2, Critical Ops, and Mobile Legends to run beyond 60 fps. Neither of them hit the 120 fps cap and I noticed slight frame drops into the game as well. But it’s still better than being limited to just 60 fps, right?

Moving on, the Galaxy M53 is the most affordable Samsung phone with a 108MP camera right now. And if you’ve checked out my review of the Galaxy A73, you know that I was impressed with its camera output, which also had a 108MP main sensor. So, honestly, I had high expectations with the M53 cameras too.

For this, we compared it against the Realme 9 Pro+ and found that the M53’s results from the primary camera look slightly more natural most of the time.

It does somewhat boost saturation but Realme’s image processing is a little overboard in this aspect. But besides that, I’d say these two phones compete very well in terms of details and dynamic range.

Yet in some cases, the M53 shoots underexposed photos—especially when it’s about to get dark.

And although it lets you capture a wider field of view with its ultrawide camera, the edge distortion can be a bit too distracting. The Realme 9 Pro+ on the other hand manages slightly better details around the edges.

On the contrary, the M53’s portraits are somewhat underexposed and have a worse dynamic range.

Even its selfies have this distinctive warm, yellowish tinge with little details. That’s not to say Realme’s selfies are all that great though since the subjects look a bit pale here too.

But when it gets dark, the 9 Pro+ shoots way better, way sharper lowlight photos since it has OIS onboard. On the contrary, the Galaxy M53’s standard nighttime shots are noisy and underexposed.

But with Night Mode turned on, it does bring the exposure to a more acceptable level.

Getting to videos, the Reame 9 Pro+ shoots noticeably steadier videos at both 4K 30 and 1080p 60 fps modes, mostly thanks to a little cropping-in magic. At 1080p 30 fps, the M53 manages similar stabilization without cropping in.

Other than this, I also checked its cameras against the Galaxy A33 to see if the 108MP sensor is all that special.

As it turns out, these two camera systems are quite similar. M53’s photos have slightly better HDR and maybe even a bit better exposure maintenance sometimes, but that’s about it. So, unlike the Galaxy A73, the M53’s 108MP camera is not what Samsung has painted it out to be.

Cameras aside, the Galaxy M53’s battery life is great. Under normal usage, this phone will easily last you through the day with some charge to spare before you go to bed. But, I guess the battery endurance could’ve been even better if Samsung had implemented a dynamic refresh rate feature. 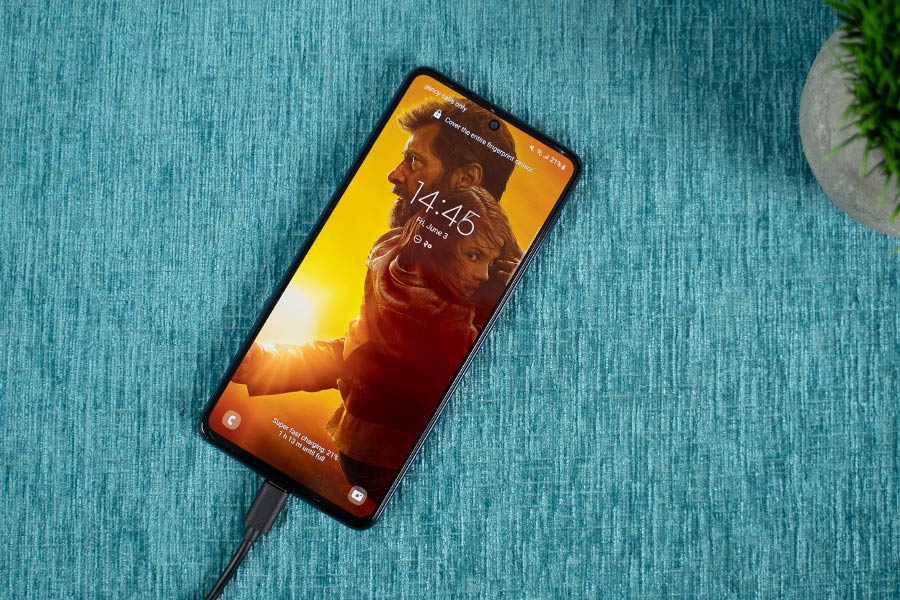 Likewise, while Samsung at least shipped a 15W power brick with the Galaxy M52 last year, you’re not getting one this time. And a compatible 25W adapter takes it from 0 to 100% in a little under 1.5 hours.

Okay, let’s wrap up this review of the Samsung Galaxy M53 now. From everything I’ve discussed so far, it’s clear as day that this phone is not as impressive as I initially thought it would be. Above all else, Samsung’s biggest selling point in the mid-range segment has always been the cameras.

But unfortunately, this guy doesn’t live up to those expectations. Maybe that’s because Samsung hasn’t optimized the Dimensity chip well, or maybe it’s something else. Whatever the reason, the M53 needs a lot of work in the camera department. And compared to the Galaxy M52, even the performance is somewhat of a downgrade here. So if you’re looking to buy a reliable mid-range phone right now, the M53 just doesn’t make any sense as long as Samsung is still selling the M52. That too at a cheaper price! On the other hand, the Realme 9 Pro+ is still a great option in this segment!

Or if you’re shopping for something that’s better-looking, has a longer software commitment, and even an official IP rating, then the Galaxy A33 is also a decent alternative—especially since it has received a healthy price cut since the launch.